The Torrens Junction project, first approved under federal Labor, had its funding confirmed in the federal Budget this week. It will include a lowered commuter train line through the parklands and an underpass for Park Tce – eliminating the level crossing.

It will fix a pinch point, just north of Bonython Park, where the freight line and the Outer Harbor commuter line meet, commonly causing delays for freight trains and Park Tce traffic, as well as limiting the length of freight trains on the line.

However, the project raises questions about the future of the long-promised Port Adelaide tram line which would replace heavy rail to Outer Harbor.

Under the Government’s integrated transport plan, the proposed tram line wouldn’t use the rail line through the parklands, instead directing trams along the current route to the Entertainment Centre before switching to the rail corridor at Bowden.

However, InDaily understands the Torrens Junction project will be designed with diesel and electric trains, as well as light rail, in mind, allowing the future option of running trams through the parklands along the current rail corridor, and then via a new section of track along War Memorial Drive, past the Adelaide Oval, and then up King William Street.

In a possible clue, the Government released illustrations of trams using the revamped section of line through the parklands.

Fletcher said the project would improve the productivity of the national rail freight network by enabling 1800-metre freight trains – about 20 per cent longer than the current configuration – to operate between Adelaide and Melbourne.

“It is also vital to reduce traffic delays experienced on one of the busiest sections of the inner ring route road network,” he said.

“Almost 50,000 vehicles use Park Terrace every day and are often delayed by the 160 passenger train movements through this level crossing each day.”

The lowered line will extend to Bowden station, although the exact details about the total length of the project will be determined in the design stage.

Mullighan said the project, along with stage two of upgrades at Goodwood to create a new pedestrian and cycling overpass, would support about 212 jobs a year during construction. 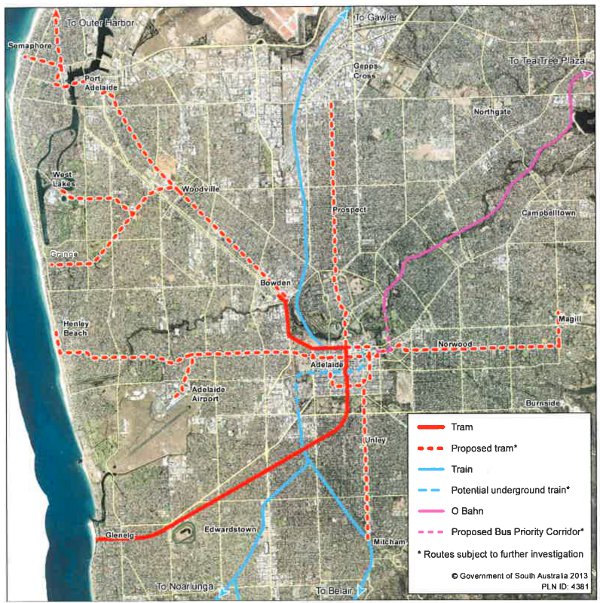 The State Government’s map of proposed tram route extensions, including to Outer Harbor via the Port. 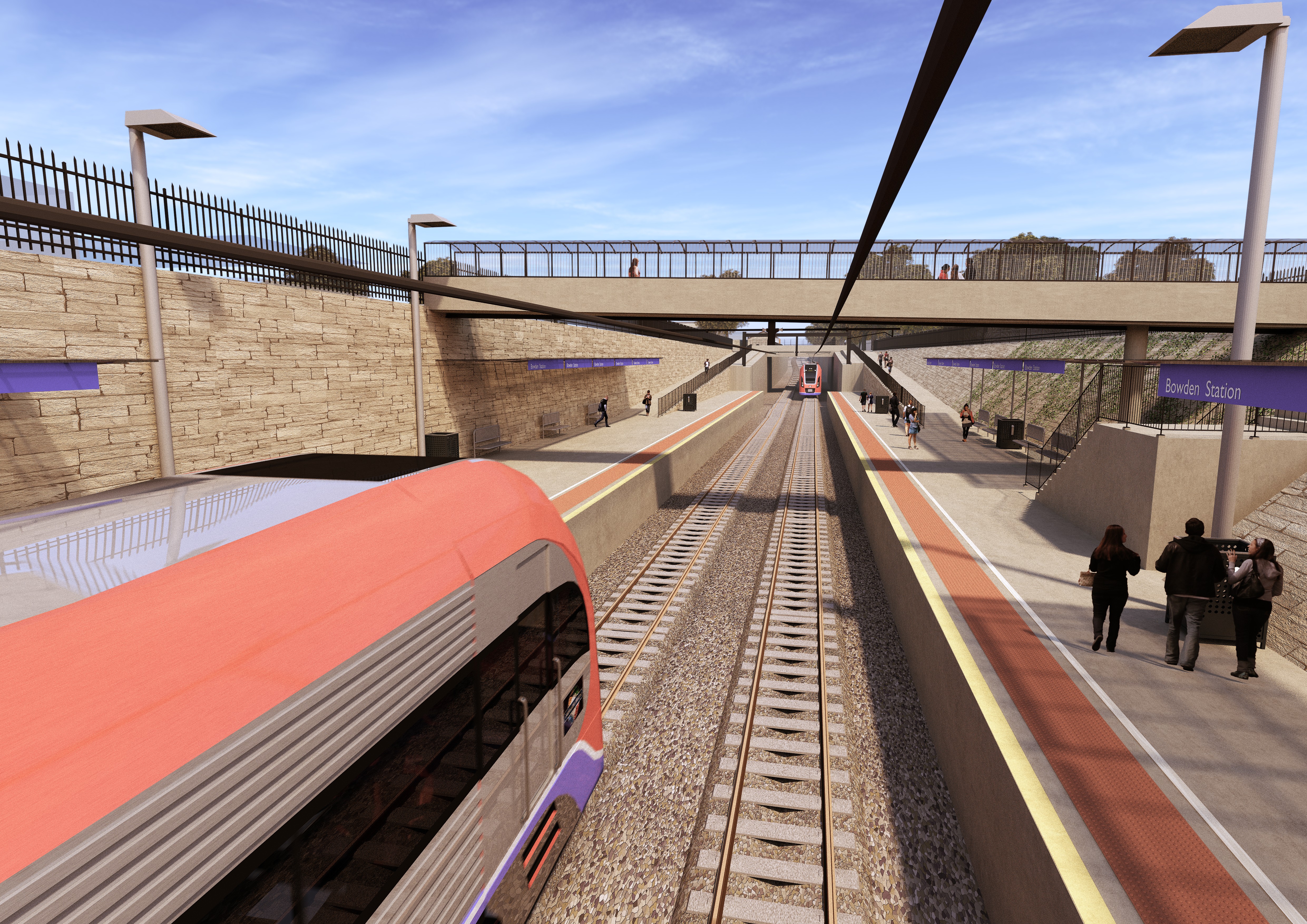 A Government image of the revamped Bowden station.

The Torrens Junction project, first approved under Labor infrastructure minister Anthony Albanese, has long raised questions about the Port tram concept – identified in the State Government’s transport plan as a medium term prospect, to be built in the next five to 15 years. The concept includes lines to Semaphore, West Lakes and Grange.

The key point has been that under the current concept for the PortLink tram network, the pinch point at Torrens Junction would be eliminated because the trams wouldn’t use the rail corridor. So why spend more than $200 million on a problem largely solved by the trams? The argument is that it would be better to spend the money on getting started on the tram link.

However, a senior Government source has told InDaily that Torrens Junction could open up new possibilities for the tram line, not envisaged in the transport plan.

If the Government opts for trams on the line – and that’s not certain – transport planners have started considering how the current corridor along War Memorial Drive to the Adelaide Railway Station could be adjusted, with a tramline extended onto the road past Adelaide Oval and on to King William St.

The current route to the Entertainment Centre could be maintained, and joined up to the tram corridor at Bowden.

The question remains, though, whether trams will be ultimately supported on the line.

InDaily understands the Government has received two consultants’ reports on the concept – one of which supports light rail to Outer Harbor, and other of which opposes it, on the grounds that trams carry fewer passengers and would increase travel times to the far reaches of the line, compared to trains.