They touched down in Finland over the long weekend and toured the Olkiluoto Nuclear Power Plant overnight, Australian time, along with the adjoining Onkalo spent nuclear fuel repository being constructed nearby.

Business SA chief executive Nigel McBride told InDaily the tour group was taken 60 metres underground into the bedrock of the existing low to medium waste facility and viewed a model of the planned high-level repository – which will be 420 metres deep.

“It looks very simple, but of course it’s incredibly complex – an amazing use of technology,” said McBride, who filmed the presentation on his mobile phone.

“They talk about a ‘final’ high-level nuclear waste repository – 20,000 years and beyond… the whole scope of reference in relation to time is many thousands of years.”

But he said the plant’s operators main theme was about thorough and ongoing community consultation.

“They really made a point of taking the community with them,” he said.

“Their whole message is complete transparency – the more people know, the less confusion and fear [and] they actually gained a very high level of community confidence.”

Matt Clemow, general manager of the Committee for Adelaide, who organised the delegation, said the first day of the tour gave him “a great deal of confidence” that it was a worthwhile exercise.

“We’ve had the joint venture partners present to us this morning… they consider the community’s acceptance of the nuclear fuel industry to be an everyday exercise – and an ongoing exercise – to ensure that people continue to have that community acceptance that it’s safe and provides economic benefits,” he said. 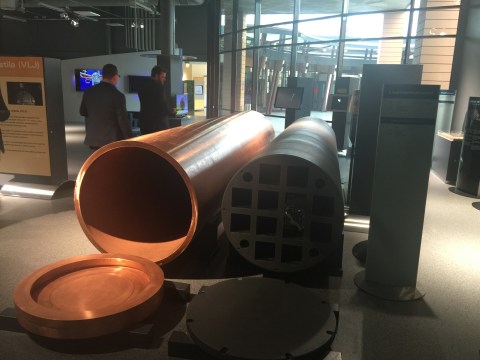 Real-size model of a copper sheath and insert, which will contain the spent fuel rods.

Clemow said the fundamental difference for what’s proposed in SA through Scarce’s tentative findings – which found a multi-billion-dollar business case for a high-level world-class storage facility in the state’s outback – was that there was no corresponding proposal for the establishment of a nuclear power plant.

“There’s a reasonable nuance there… I think the most important thing is in the separation of nuclear power and spent fuel disposal.

“This is only going to work if there are communities that accept they want to be a part of it because of the economic benefits around it.”

McBride noted a cultural distinction, given the Finns “believe that because they use nuclear power it’s their responsibility to deal with the waste”.

“They’ve changed the law so they can no longer export nuclear waste – they believe it’s their duty to deal with it,” he said.

“If the Finns feel that way, that may be the case across Europe… but for geographical and political stability reasons, countries like Japan and South Korea won’t have that luxury – they’ll need to find a [storage] solution.” 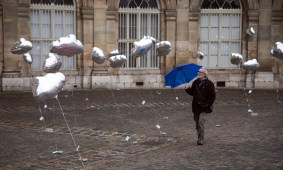 What was the real Chernobyl death toll?

Whether or not South Australia can make a similar moral case for nuclear storage, McBride says: “If you can’t bring the community with you, don’t bother”.

“Their whole process [in Finland] has been very careful,” he said.

“The worst thing you can do, either the people who are supporting this or retreating from it, is present this as a simple case of ‘yes or no’ – it’s much more complex [and] you have to be realistic about the timeframes and getting the community to come with you.”