Most of the respondents to the survey, conducted in recent months, were senior doctors (consultants) and most were from the Central Adelaide Local Health Network – which includes the Royal Adelaide Hospital and the Queen Elizabeth Hospital.

One in five respondents held management roles such as Head of Unit or Clinical Director.

The survey, obtained by InDaily this morning, asked a series of questions about the controversial reform process.

61 per cent disagreed or strongly disagreed that the Transforming Health initiatives would “provide better care for (their) patients”.

70 per cent disagreed or strongly disagreed that Transforming Health had “sufficient safety measures to protect you, other staff and patients”.

71 per cent disagreed or strongly disagreed that Transforming Health would “deliver the best care, first time, every time, to all South Australians” (as per its slogan).

79 per cent disagreed  or strongly disagreed that the State Government had conducted “effective stakeholder consultation” during the implementation of Transforming Health.

And almost 90 per cent of respondents said they did not feel they had “an ability to influence the outcomes of the Transforming Health reforms.

73 per cent disagreed or strongly disagreed that Transforming Health would “improve community access to health services, where they need them”.

AMA President Dr. Janice Fletcher said in a statement this afternoon that: “Transforming Health’s ambition has been a bold one, and certainly the fact that it was born out of a response to federal budget cuts was a concern from the start”.

“However, doctors were ready to contribute and help the government get this right,” she said.

“Unfortunately what we have been hearing, and what this survey underlines, is that while there is support for some aspects, the medical profession has serious concerns about the impacts and implementation of the Transforming Health proposals.”

SASMOA President Dr David Pope said that doctors’ concerns “have not been listened to, and that they are afraid for the future, for their patients and the communities they serve”.

“They are telling us that consultation has been inadequate, in some cases insincere, and in some cases completely absent,” he said.

Fletcher said there was “significant concern that the government is quite simply trying to do ‘too much, too soon’ in tackling this major reform with its reconfiguration of hospital services, at the same time as the move to the new RAH and the introduction of the EPAS patient administration and medical record system”. 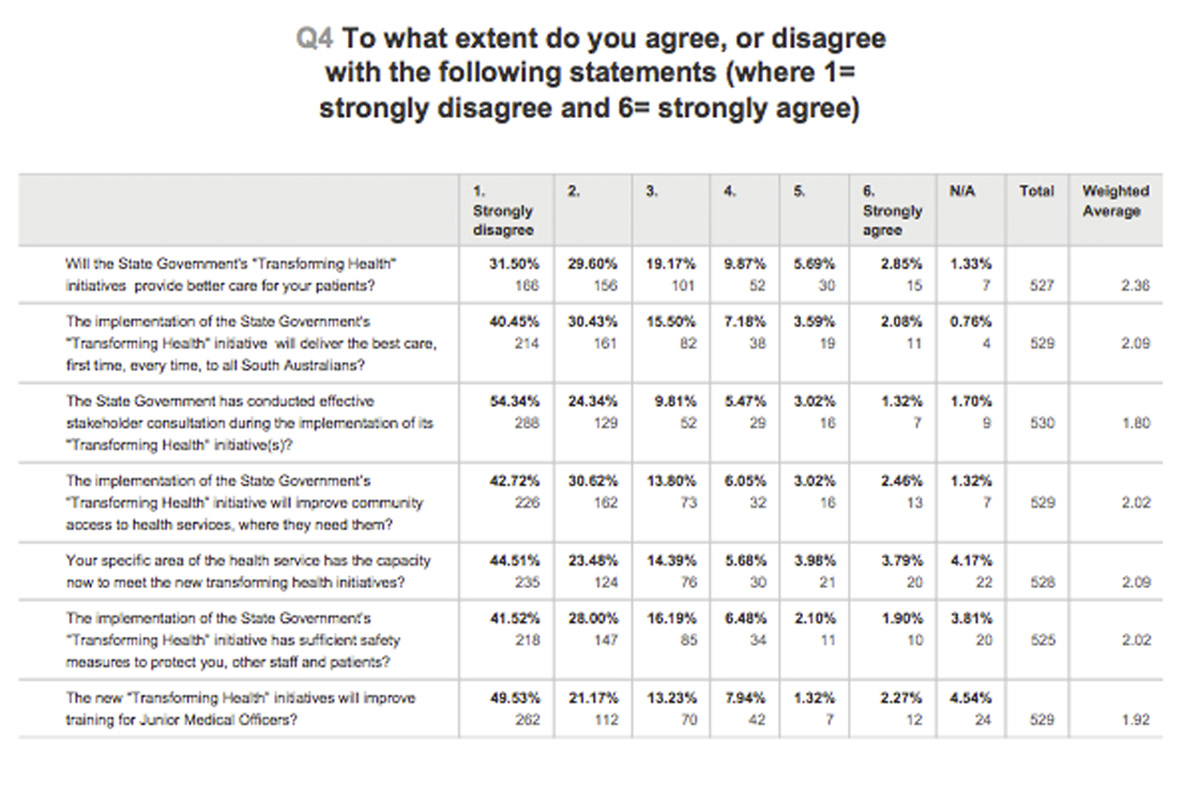 Results from the survey.

The survey includes hundreds of comments from anonymous respondents, including:

“I don’t understand the logic behind this – why reduce bed numbers and put more pressure on staff? Why spend money building new infrastructure when there are hospitals in place that could simply be refurbished, and better supply their local area?”

“The consultation process seems to have been lacking – at the junior level, opportunities for involvement have been limited and when concerns have been raised at senior levels, they have been largely dismissed.”

“There were ample opportunities involved to be engaged and provide feedback, but none of that changed the pre-determined outcome …”

But not all of the comments were critical:

“Consolidation of Services will improve outcomes. Adelaide has too many hospitals.”

“I agree with the principle of centralisation of care in major centres. The biggest issue is with how it is implemented.”

The survey follows the release of a survey of just under half of SA’s surgeons earlier this year that found:

81 per cent had concerns about patient access to surgical services.

84 per cent “have major concerns and do not support the implementation process“.

71 per cent had “concerns with patient safety“.

74 per cent were concerned with the program’s impact on training for future surgeons.

“We wanted to make sure that these claims accurately represented the views of our own surgical Fellowship.

“… Our intention was not to embarrass the government in any way, we just wanted to ensure that we had a better understanding of how our surgeons felt about these changes, so that we could begin to advocate more effectively on their behalf.

“To date surgeons who have expressed their concerns regarding the Transforming Health changes have been characterised as having a minority view and speaking out of self–interest.

“The results of our survey indicate that this was not the case.”

Snelling likened the Transforming Health process to the Adelaide Oval rebuild, which initially attracted entrenched skepticism but has been roundly celebrated since its opening in 2014.

“Disruptive change like this, people are going to find confronting,” Snelling said.

He also attacked the survey itself, declaring: “It’s not exactly what you’d call a scientific survey.”

“This sort of method where you basically invite responses, I’d suggest the way it’s been done would skew the results,” he said.

He argued the number of respondents represented “only about 1.5 per cent of clinicians who work in SA our [public] hospitals”.

“But having said that, change is always hard… there are always going to be people who are unsettled and anxious about change, so the results don’t particularly surprise me,” he said.