Proteins and peptides from microalgae, and other marine organisms, can be used as functional foods or supplements in a more healthy diet, particularly for young or older people, and to prevent or treat some medical conditions.

Microscopic marine algae or phytoplankton is a sustainable and inexpensive source of single-celled photosynthetic organisms closely related to plants that contain compounds with benefits for human health and nutrition, animal diets and can even be used for next-generation biofuels.

“This is another outstanding example of collaborative, translational research which focuses on achieving commercial outcomes which can create business and jobs in South Australia,” Flinders Vice-Chancellor Professor Colin Stirling said.

“This strategic research partnership follows on from our long-running Gather Great Ocean Group collaborative model, this time with another prominent Chinese corporate partner.”

Shandong Tianjiu Industrial Group manages more than 7000 hectares of intensive commercial farming, has a workforce of more than 800, and annual global sales of more than 1 billion RMB ($A220 million). Its biotech subsidiary produces more than 500 tonnes of plant product extracts a year, including yam flour, malt extract and a popular certified non-dairy creamer.

Tianjiu is also one of the largest manufacturers of plant-derived functional peptides from food crops such as soybean, corn and peas. These plant extracts have a wide range of applications in the health food and nutritional supplement industries, beverage and baking sectors, as well as the pharmaceutical industry.

The Tianjiu-Flinders University joint investment of almost $1 million is just the first phase of investment and could expand in future, says Professor Wei Zhang, director of the Centre for Marine Bioproducts Development at Flinders. 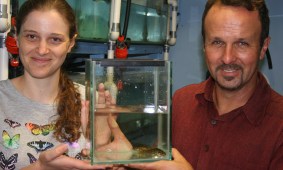 “We are delighted to partner with this large agricultural, food and biotech processing company which is investing heavily in innovation and has already invested millions in R&D, developing food supplements or functional bioproducts and improved pharmaceuticals from plant extracts, fermentation and biotech polypeptide technology.

“Developing high-value marine biotech for advanced food manufacturing will add to Australia’s growing marine ‘blue economy’ which is forecast to grow to more than $100 billion by 2025 (according to the Australia’s National Marine Science Plan 2015-25).”

“We are pleased to be working to contribute to the growth of Australia’s blue economy,” says Flinders Deputy Vice-Chancellor (Research) Professor Robert Saint, who will accompany Professor Zhang on a trip to Tianjiu’s corporate head office in Shandong province in April for a follow-up signing ceremony for a reciprocal research facility in China.