It follows a finding by the State Ombudsman that the council handled a prime foreshore land deal unlawfully, as revealed by InDaily this week.

“One of the great reasons this has all fallen over and there is such a catastrophic mess with the Kangaroo Island Council is an inexperienced CEO, who will not listen to anyone, and who has bullied and cajoled councillors, both past and present,” Pengilly told Parliament yesterday afternoon.

“The CEO has the councillors in his pocket, so to speak, that is, in a bullying manner.”

He said the council had “been trying to duck and weave and offer distractions” in relation to the land deal.

Unfortunately in this case, the council is ethically bankrupt, it is almost financially bankrupt, and the poor old ratepayers will have to pick it up and sort it out.

Pengilly said there had been “four years of tyrannical rule at that council by the current chief executive officer”.

“In the CEO’s time there, my understanding is that 33 staff have disappeared for various reasons,” he said.

“The bullying and intimidation are ongoing at senior management level.”

In a statement to InDaily this afternoon, Boardman said: “We will not be commenting on this matter until we have taken advice on how best to address the gross inaccuracies, generalisations and wrong information provided by Mr Pengilly in his speech to Parliament”.

Brock told InDaily this afternoon it was “concerning that Mr Pengilly has made a number of accusations against the council under parliamentary privilege”.

“He should consider providing the Ombudsman with any evidence he has to back up his statements.”

Ombudsman Wayne Lines found that the Kangaroo Island Council’s decision to take control of, and then lease, a piece of small KI town American River’s foreshore was unlawful – but did not constitute “maladministration” under the ICAC Act.

He found that the council had conducted no formal community consultation process in relation to the handover of the land, and failed to produce a land management plan.

“The council, by failing to have a management plan for its community land when it assumed care, control and management of [the] land … with intention of leasing the land, acted in a manner that was contrary to law,” Lines’ report says.

The CEO and the mayor, who were complicit in this whole debacle, did not declare a conflict of interest.

Pengilly told Parliament that Boardman and KI Mayor Peter Clements should have absented themselves and declared a “conflict of interest” during a council meeting discussing the Ombudsman’s findings on Tuesday this week.

“The CEO and the mayor, who were complicit in this whole debacle, did not declare a conflict of interest,” Pengilly said.

“They did not leave the room. They stayed in the chamber while this was discussed.

“That alone is a great breach of the way things should happen.”

Pengilly didn’t detail how Boardman and Clements were allegedly conflicted on the issue.

Pengilly said that he did not want to go public with his allegations, but that the council had been “in a fair bit of a mess” for “seven or eight years now” and that the Ombudsman’s findings had forced his hand.

“I do not doubt for one moment that what I am saying today is not going to earn a lot of friends in some places [however] what has happened is not good enough” Pengilly said. 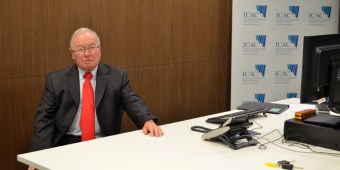 “Unfortunately in this case, the council is ethically bankrupt, it is almost financially bankrupt, and the poor old ratepayers will have to pick it up and sort it out.

“It is outrageous, it is a disgrace and, as I said, the Local Government Minister has to … act immediately and move to put things right.”

Pengilly said “some very good elected members” at the council would have to be removed if the council is placed under administration.

“I shudder to think what the CEO will treat people like after he has been made aware of what I have had to say in this place.

Pengilly is a former Mayor of Kangaroo Island.