The first ratings figures for 2016 show ABC’s seemingly indestructible breakfast duo of Matthew Abraham and David Bevan have opened up a huge lead over their nearest rivals.

The survey, from January 17 to February 27, was also significant for Southern Cross Austereo’s two Adelaide stations – Triple M and hit107 – who both grew listenership.

Long-time leading station Mix102.3 is on the slide, along with FIVEaa which lost listener share across its weekday schedule.

Today’s survey shows 891 in first place, followed by Nova, with Mix back in third. Triple M has jumped into fourth place, based on solid gains across the weekday schedule, including taking a surprise lead in mornings.

Mix lost share in every shift, while Nova had modest gains.

hit107 was the fastest mover overall, thanks to a significant gains in breakfast, mornings and afternoons. Its star drive team – Andy Lee and Hamish Blake – lost some share.

FIVEaa slid from fourth overall to sixth, being leapfrogged by Triple M and hit107. 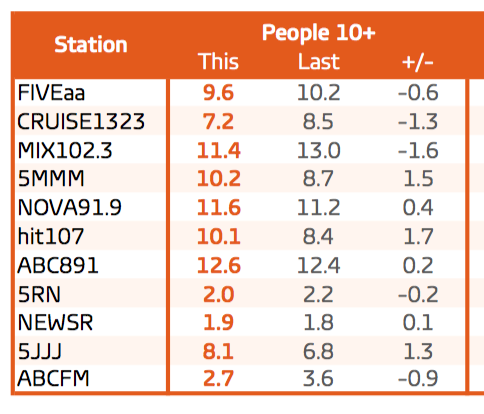 In the key breakfast shift, leaders Abraham and Bevan have pushed out to a huge lead – putting on 1.1 points to take 18.9 per cent of listeners.

Their nearest rivals, David Penberthy and Will Goodings on FIVEaa, lost share, but still hang on to second place with 11.9 per cent of listeners. 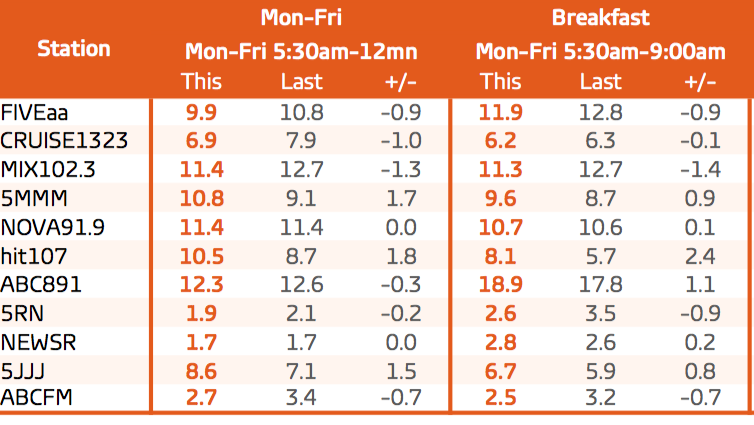 The ABC has changed up its line-up this year and the newbies have had mixed success.

However, veteran evenings presenter Peter Goers has opened up a big lead – more than three percentage points ahead of nearest rival, Nova, with FIVEaa in third.