The number of finalised defendants in SA was lower in 2014-15 than it has been at least four years, the latest Australian Bureau of Statistics figures show.

That number fell eight per cent with nearly 4000 fewer cases finalised than in the previous financial year.

It’s a different story around the country, where the number of finalised defendants increasing by two per cent on average from 2013-14 to 2014-15.

Law Society of South Australia president David Caruso told InDaily the criminal justice backlog was delaying closure for victims of crime, forcing defendants to wait between 18 months and two years with a criminal charge hanging over their head, and offending the human rights of defendants who are held in custody awaiting trial.

He said the number of cases coming through the system was climbing, but the State Government was failing to fund the system adequately to deal with the increase.

“The criminal justice system is trying to offer the same access to justice it always has with less and less resources,” he said.

“The waiting time now for a District Court trial is between 18 months and two years.

“If it takes that long to finalise the cases [defendants] will be trying to proceed with their lives with the constant concern of a criminal case over their heads [and victims of crime] have to enter the waiting game.

“It’s a matter of dignity for all involved.”

However, Attorney-General John Rau told InDaily the reduced number of finalised defendants did not indicate a less efficient courts system.

“The focus on the number of defendants finalised does not indicate a more or less efficient justice system,” he said.

“The reduction in the statistic for finalised defendant matters is related to changes to jurisdictional limits within the courts.”

The ABS report says some of the decrease in the number of defendants finalised “may partially be due to” the transfer of responsibility from the Courts Administration Authority to the new Fines Enforcement and Recovery Unit managed by the Attorney-General’s Department. However, the report says the fall in the rate of finalised defendants occurred at every court level in SA.

“For example, clearance rates (not the same as finalised defendants rates) in the Magistrates Court are up two per cent from last year,” he said.

A spokesperson for Rau told InDaily that the Magistrate’s court was seeing fewer cases overall because of the change to fines enforcement, among others. 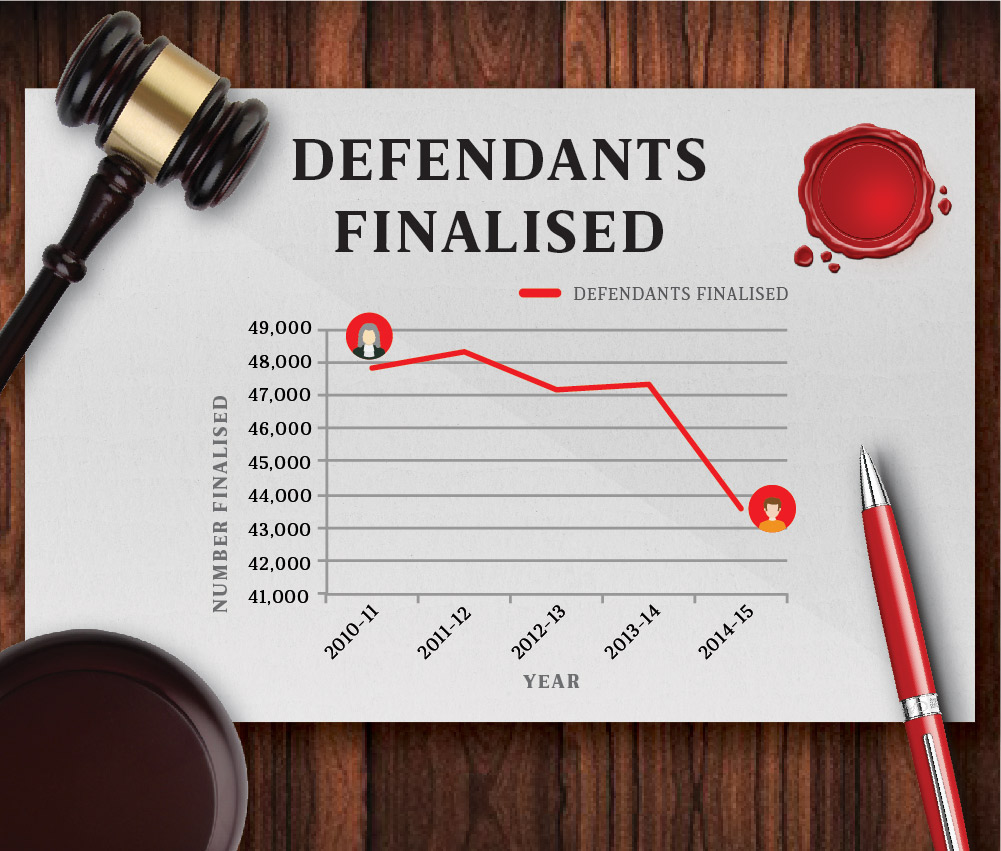 The eight per cent fall from 2013-14 is a part of a trend of fewer cases being finalised over time, the ABS figures show. Illustration: Leah Zahorujko

Caruso said that the backlog in cases would likely continue to increase without new resources from the State Government.

He said there were 10 courtrooms in South Australia with the necessary security to hear criminal cases.

“Even if we did have the judges we don’t have the courtrooms to hear them,” he said.

“There’s only so much work that can be done.”

But Rau told InDaily that “fines are an effective deterrent to combat behaviour that can impact others in a way that far exceeds the cost of any fine”.

“The fines unit continues to provide relief on a case by case basis to those that are willing to engage with the unit.”