The closure of Alinta Energy’s coal mine at Leigh Creek is effectively the death knell for the outback town, which sprung up to service the open cut operation.

Alinta this morning confirmed the mine, and the two Port Augusta power stations it supplies, could close as early as March next year, and certainly by 2018, as operations become “increasingly uneconomic”.

Port Augusta mayor Sam Johnson said the move would have an “absolutely catastrophic effect on the town and the people that reside in Leigh Creek”.

“The whole town survives purely on that industry,” he said.

Johnson said Leigh Creek was “purpose-built” to service the mine in its heyday, in a manner “not dissimilar to Roxby Downs”, with satellite services in towns such as Innamincka and Lyndhurst.

“So if they take that coal mine away and take the majority of the population away, how do you justify having those services there and how do you find the staff to work there?” Johnson said.

Johnson also questioned what impact the closure would have on broader energy supply in peak periods, saying: “If we have to buy in power from somewhere like Victoria, what cost is that going to be to South Australian households, who already have the 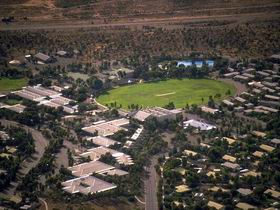 highest cost of power in Australia?”

But Alinta insists the closures will have “no impact” on electricity supply to its residential and business customers, and the Australian Energy Market Operator has told the State Government demand will be met.

“Their welfare and that of their families is our highest priority at this time,” he said.

“All affected employees will receive their full entitlements and the company will provide additional support services to assist during this transition. It is anticipated that a total in the vicinity of $75 million in redundancy benefits and entitlements will be distributed to employees across the Flinders business.”

Dimery insisted Alinta had investigated “all possibilities to find a viable economic solution” over its four and half years running the business.

“During this period the company has incurred operating losses in the vicinity of $100 million whilst at the same time investing an additional $200 million to extend the operating life of the Flinders business,” he said.

“The decline in demand for energy, as households have become more efficient and the number of industrial customers has declined, combined with policy settings designed to support significant growth in renewable energy generation have together had the effect of causing a significant oversupply of power available to South Australia …We now believe that there can be no expectation that the Flinders business can return to profitability.”

The decision followed “a detailed strategic review”, including consultation with the State Government.

Manufacturing and Innovation Minister Kyam Maher said in a statement planning was “already underway to respond to the decision and to ensure the workers and Upper Spencer Gulf communities get the support they need”.

“Our thoughts are with the workers and communities affected by Alinta’s decision,” he said.

“The State Government will have people on the ground in Leigh Creek and Port Augusta from tomorrow to gauge the community’s needs at this challenging time.”

He said the Northern and Playford power stations were “big employers” in Port Augusta, but remained hopeful that a saviour would come in the form of international investment in renewable energy.

“I’m still a strong believer that Port Augusta will pave the way and become Australia’s capital of renewable energy,” he said.

There has been overseas interest in establishing a solar thermal plant in the area, but Johnson insists “it needs that strong policy commitment from the Federal Government (first)”.

“We’re putting some serious wheels in motion to do a renewable option here in SA, and if that was to get off the ground it could start in 2017 and be a $1 billion project with 1000 jobs … but that’s if all the ducks line up,” he said.

“There’s no surprises coal was more than likely to come to an end – it’s a matter of what option do we have to replace it?”

The decision comes as a comprehensive review of the state’s renewable energy industry concluded the overall quantity of solar electricity supplied was “small in the context of state demand”.

Moreover, prospects for wind energy remained constrained by “the reliability of the national grid” and “the mismatch between supply variability and demand”.

The report concluded that nuclear energy is a “mature technology with a solid track record of delivering very low-emission and reliable electricity in concert with other technologies”.

“We need clean energy generators that are always available, can respond to changes in demand, and provide essential network services,” said lead author Ben Heard, an energy consultant and PhD candidate in the School of Biological Sciences.

“We need to think beyond wind and we need to do that now.”

The review concludes solar energy offers a partial solution, “but many uncertainties remain about its capacity to compete at large scales”.

“Solar panels can now be found in about 25% of the state’s households, but … installation rates have more than halved with the substantial withdrawal of subsidies,” said Heard.