The State Government has bowed to pressure from lobby groups, residents and local government to produce a fourth version of its promised O-Bahn extension from Hackney Road to the city.

The new design, announced today, includes a longer tunnel to reduce the impact on Rymill Park.

Rundle Road, which was to be closed under the previous version to create 3000 square metres of extra parklands, will remain open, removing the need for road lanes on Rymill Park.

The tunnel portal has been moved 140 metres closer to Grenfell Street, which means the tunnel will be lengthened from 510 metres to 650 metres.

Transport Minister Stephen Mullighan said the government had revised the project to reduce the impact on Rymill Park and improve car parking for the East End.

He said the new plan would create an extra 50 car parks on East Terrace and Rundle Road, after business lobbied the council to increase car parking in the precinct.

“The government has always said it would listen to the community throughout the life of this project and that is exactly what we’ve done,” Mullighan said.

“Importantly though, the primary objectives of the project – to improve the reliability and travel time for O-Bahn passengers and to reduce congestion on the inner ring route – have not changed.”

“Whilst council would prefer there is no impact to parklands – including a desire of the parklands to remain untouched – the revised plan addresses our concerns and those within the community and other stakeholders we represent,” he said in a statement.

“The revised plan is a better plan for Rymill Park and the parklands, with a net return expected to parklands and less trees impacted by the project.”

Mullighan told a press conference that construction would begin on the project before the end of this year.

There would be a net gain of 1500 square metres of parklands because of a narrowing of Rundle Road, the realignment of East Terrace, and a reshaping of the corner of Rundle Road and Dequetteville Terrace.

He said it was a “good example” of the government’s “debate and decide mantra”. 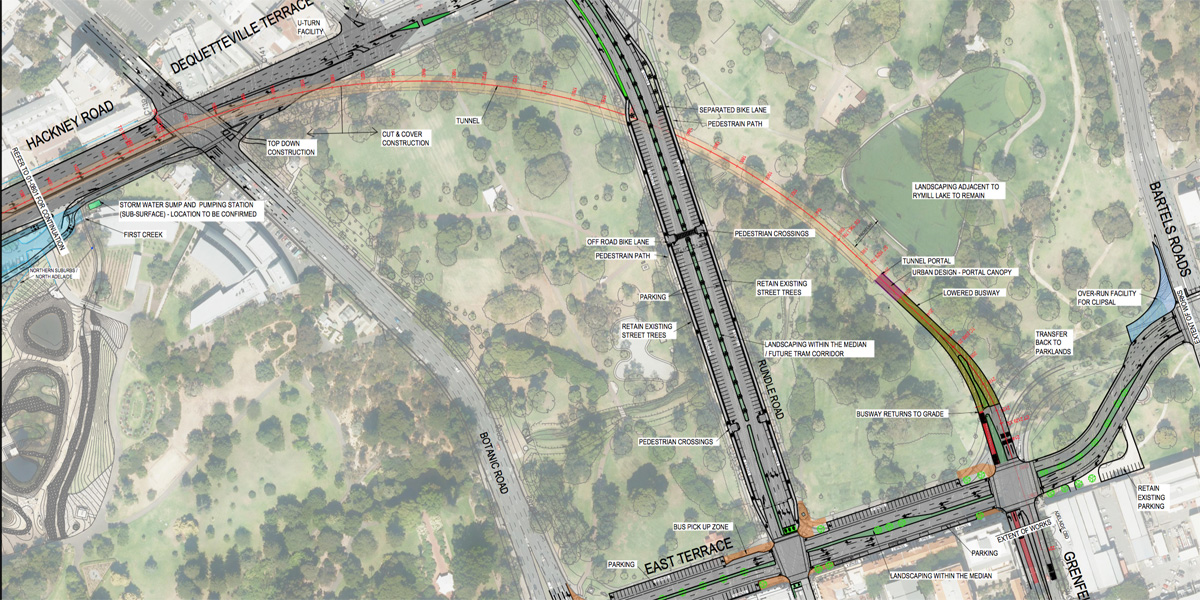 This is the fourth version of the Government’s O-Bahn extension project.

Takes One and Two

In February last year, in the lead up to the state election, Premier Jay Weatherill pledged $160 million for an extension to the O’Bahn tunnel from Hackney Road to Rundle Street by 2017 if Labor won government.

That upgrade would have seen the O-Bahn tunnel descend underneath Hackney Road, avoiding a busy North Terrace intersection and emerge on Rundle Road, adjacent Rymill Park near East Terrace.

Weatherill said the upgrade would save commuters an average four minutes of travel time.

An earlier State Government proposal to extend the O-Bahn track along Hackney Road and into the city was scrapped when the cash-strapped Federal Government withdrew its funding in 2011.

In February this year, Weatherill and Transport Minister Stephen Mullighan announced a revised plan which would close Rundle Road, and create a new road and O-Bahn tunnel running into Grenfell Street.

This second plan would have turned Rundle Road, which has four lanes plus parking lands on both sides, over to parklands.

It would also have opened the possibility of extending the tram line along the “realigned” Rundle Road, running into Grenfell Street, the State Government said.

The new, thinner road, connecting to Dequetteville Terrace through Rymill Park was to have saved commuters an extra three minutes’ travel time over the original plan, and cost the same amount of money to construct, the State Government said, but halve the current 150 car parks on Rundle Road.

The impact on the parklands, the government said, would be minimal, and there would be a net benefit of 3000sqm of reclaimed parklands, which would also allow for a larger events space.

However, residents of the East End, business groups, Adelaide City Council and Norwood, Payneham and St Peters Council objected to the plan, which critics claimed would “destroy Rymill Park”.

The effective “Save Rymill Park” campaign was launched, arguing that the Government’s revised plan would ruin the aesthetics and reduce the usablility of the park, particularly for families.