Some Adelaide Hills grape growers have been forced to abandon their entire vintage after their grapes tested positive to smoke taint from the Sampson Flat bushfire.

One of the growers and winemakers, Frank Baldasso, was trapped on his property during the January blaze, and counted himself lucky to have survived as the fire roared through one of his vineyards.

He had lost about a quarter of his vines, but he was safe, and optimistic that the smoke – thick enough to block out the sun, but quickly swept away by the wind – could not have ruined the rest of his precious vintage.

Years of labour and hundreds of thousands of dollars had been poured into his Kenton Valley vineyard.

But earlier this month Baldasso received the worst possible news, having sent samples from each of the varieties planted on his 13 ha vineyard to the Adelaide Wine Research Institute for testing: everything was tainted.

“I don’t know where to turn now to be able to make a start again.

“I thought they would have been okay, but apparently, no.

“You don’t really taste it on the actual berries – they’re beautiful; they taste nice and sweet – but apparently it comes out after the grapes have been processed and the wine has been fermented.

“The early varieties – yes, I thought might have been (tainted) but not the whole lot.

“Not even the late varieties I expected would go to waste.

Baldasso, who markets his wine under the Protero label, says he has lost at least $200,000 – probably more – and will have to spend still more money commissioning a harvester to shake his ruined fruit onto the ground, to rot. 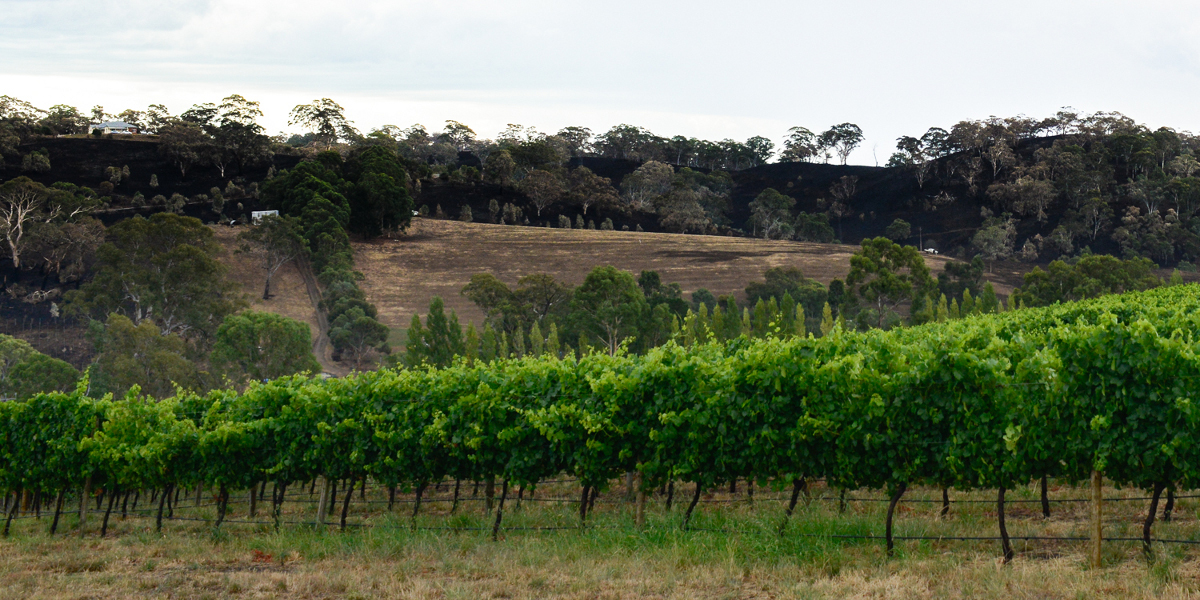 In January, Baldasso was optimistic that most of his vines would not have been affected by the fire.

“It’s just one of those things. You can’t blame anyone.

“We’ve just got to plot away. We have to try. Otherwise, you finish up; you lose the whole lot and the bank will take over everything.”

Baldasso was extremely unlucky – so far, only a few growers have confirmed smoke taint on their vintage – but he is not alone.

Adelaide Hills Wine Region chairman Tom Keelan met with grape growers from around the region to discuss the vintage on Friday.

He said only a few have been told to abandon their vintage, but many are still in the dark about whether their fruit will be usable.

“Whether or not the smoke taint issue will transpire down the track is unknown to them,” Keelan said.

“We still don’t have a total grasp of the exact number of growers affected.

“We heard the personal stories on Friday for some of the smaller and larger growers.

“There are growers that have lost all of their year’s production.

“They’ve put all their energy into those grapes, and to have them be rejected … this late in the season is terrible for them.

“This has massive implications not only on them, but on their local community.”

But he said there was relief amongst many growers, as most of the Adelaide Hills region was “completely untouched” by smoke taint.

Most are in the middle of harvesting their vintage, and hope to have it complete before Easter.

“It’s only really been isolated to the northern end of the Adelaide Hills,” Keelan said.

But he warned the smoke taint problem would still cause an economic “halo effect”, where local businesses suffer from reduced spending by affected wine growers.

He said one of the reasons Adelaide Hills wine is sold at premium prices is that, aside from the quality of the wines, growers are at constant risk from the elements.

“We have high risk of not only fires but rain, hale and frost.”

Keelan said his organisation was still assessing the economic impact of the fires, but was helping to organise low-interest, long-term loans for those worst affected by the disaster.

“We’re going to determine the economic impact of the fire (and) go cap-in-hand to the state and federal governments.”