Rundle Road will be closed and returned to parklands under an audacious plan to “transform the city’s East End”.

The Weatherill Government this morning revealed it had revised its planned $160 million plan to extend the O-Bahn under Hackney Road to Rundle Street.

Instead, the proposal now incorporates a 500 metre bus tunnel from Hackney Road to “a changed Rundle Road”, which will be closed and “realigned further to the south”, returning more than 3000 square metres of land to Rundle Park.

“At the moment it’s playing host to the Adelaide Fringe’s Garden of Unearthly Delights but we want to transform it into one of Adelaide’s premier outdoor event spaces that will attract other festivals and events,” Premier Jay Weatherill said.

“This will ensure we have minimum congestion (and) it will return very substantial land to the parklands.” 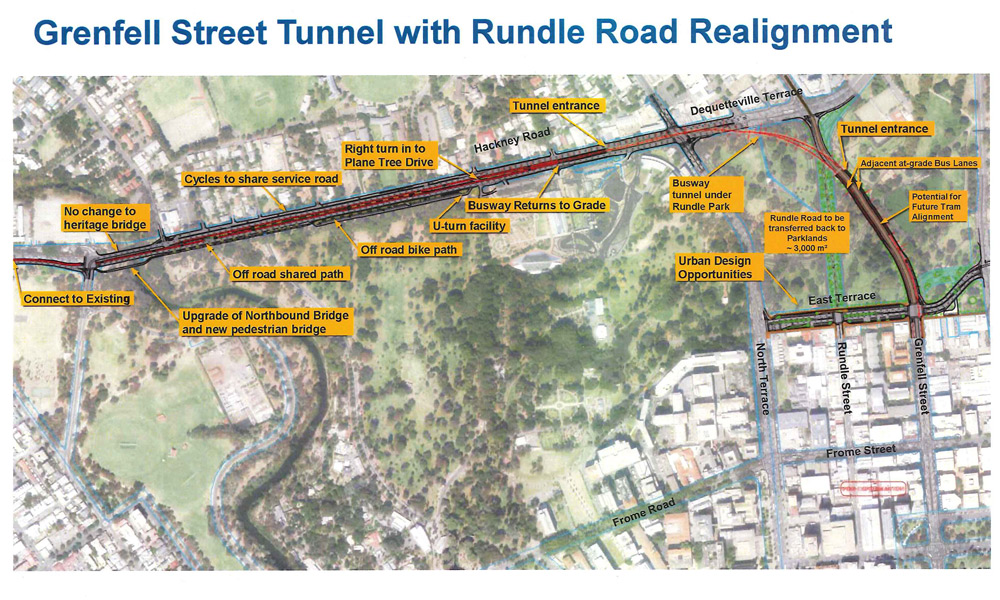 Transport Minister Stephen Mullighan said the new plan would save O-Bahn bus commuters an average of seven minutes per journey, more than the four minute saving detailed last year. He said more than 31,000 people use the O-Bahn on weekdays, making it the most utilised element of the public transport network.

“What we’re proposing is the introduction of two full bus lanes in the middle of Hackney Road,” Mullighan said.

“We’ll realign Rundle Road straight into Grenfell Street; the realignment will take buses, cars and a future tram extension…It will be great for the events and festivals on Rundle Road.”

While that will eat into the parklands north of Bartels Rd, he said “we’ve been very careful to make sure that we deliver a net benefit to the parklands” and there would be better access to utilities for events organisers.

The Government is confident it can still deliver the project within the original $160 million budget.

But it won’t be warmly received by everyone, with the current car parking capacity on Rundle Rd — 150 spaces — to be halved. But Mullighan insisted there would be no added disruption to city traffic during the Clipsal, and that the plan would free up congestion along North Tce, with fewer traffic light cycles.

Opposition spokeswoman Vickie Chapman said the Liberals supported improving O-Bahn services but questioned “how the government plans to deliver a bigger project for the same amount of money”.

The change means the Government must seek new development approvals and amend its development plan; it will also brief construction and other stakeholders about its change of heart. There will be a fresh public consultation on the new plan until March 31.