In most metropolitan capitals, the premier city boulevard would be a real estate hub, housing the cream of the business district’s most sought-after buildings.

In Adelaide, though, the city’s northern aspect – a motley array of once-grand edifices clustered along the North Terrace frontage – is underutilised, underdeveloped and largely abandoned.

And the owners of some of the worst offenders could soon run afoul of the State Government.

Planning Minister John Rau told InDaily while “there’s been a considerable effort on the northern side of the road” to beautify the precinct – with new footpaths and landscaping adorning the southern walkway that binds the museum, art gallery and university to the War Memorial – “on the southern side the contrast is dramatic”.

“And it’s obviously a part of the city that we need to focus on for serious improvement,” Rau said.

“I think it’s a real problem.”

He says new ventures on the strip such as Tiffany & Co. jeweller and the 2KW rooftop bar represent “the sort of future we’d like to see – a high-level, upmarket part of the city which complements the northern side”. But making it happen en masse has proved elusive, and Rau is determined to end the impasse.

“We’re concerned generally about owners of buildings in the city who just sit on those buildings, especially if they’re sitting on vacant buildings, that don’t invest, don’t upgrade, don’t make them attractive to tenants … I can only speculate as to why they’re doing that,” he said.

“I’m seriously thinking about the issue of whether or not we should have some sort of disincentive built into the system for people who do that.”

He didn’t elaborate about the type of stick he’d wave, but pointedly said: “We’re trying to make the city a vibrant place and invest in the city (and) it’s completely inconsistent with the policy we’ve been pushing for the last few years.”

“We have buildings that by any reasonable standard are grossly underinvested in or, worse, just sitting there with weeds growing out of them; I’m looking at what options we have to make it unattractive to leave buildings in that condition,” Rau said.

“Quite frankly if the owners of these buildings can’t be bothered tenanting them or spending any money on them, they should sell them to someone who is prepared to do it.” 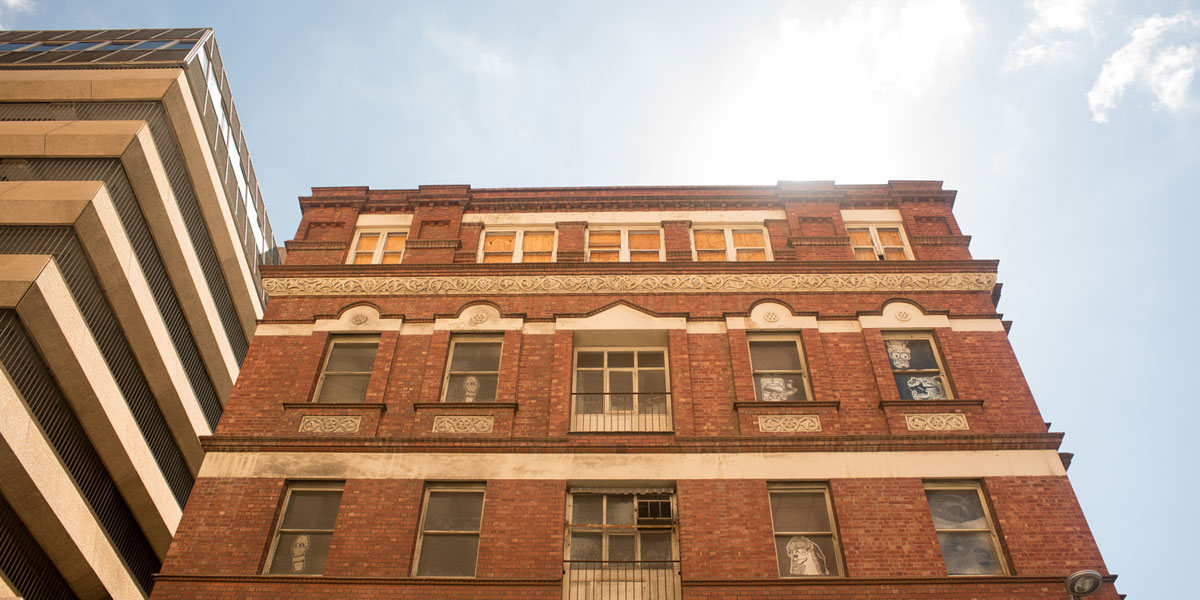 Beyond waving a big stick, he’s also brandishing an olive branch of sorts: “I’m very keen to talk to any of the business owners there who are serious about investing in their properties as to whether they’re experiencing some sort of red tape problem.”

“I’m of a mind to actually use the case management capability I’ve got within Planning to assist anyone who wants to get on with things.”

But he concedes “some things are easier to deal with than others”, and his influence may not stretch beyond “relatively minor council matters”, such as reviewing building regulations “to make sure they’re absolutely necessary and not just burdening people unnecessarily”.

“In the interests of longevity, sustainability, and long-term maintenance cost reduction, building owners have a community responsibility and moral obligation to look after their assets,” he said.

But according to Gannon, balancing building maintenance with cost considerations is an “ongoing challenge”, especially for iconic strips such as North Tce.

“We need to clear these heritage maintenance hurdles to ensure our streets don’t resemble abandonment and our cities don’t become ghost towns,” he said.

“Thoroughfares like North Terrace need to project a positive and confident outward appearance to attract investment.”

Rau hopes to “have some pretty clear direction forward” in the coming months.