If anyone doubted there was a new broom in the offices of On Dit – the iconic Adelaide University student magazine that’s served as a media industry primer for aspiring journalists since 1932 – it was dispelled this week when its fledgling editor fired off an email to the state Greens’ media unit.

The missive – a retort to a routine press release distributed to On Dit along with other media outlets – started out politely enough: “Please unsubscribe ondit@adelaide.edu.au from your mailing list.” But the manner swiftly turned.

“If I wanted to read about eco-communism I’d buy the manifesto. Many thanks.”

It’s unclear just where the Greens’ “eco-communist” manifesto is published, nor for how much it retails. The message was signed ‘Leighton McDonald-Stuart’. If the double-barrelled surname suggests a high-ranking official of the SA Young Liberals, the email auto-signature dispels any doubt: he’s the “Administrative Director of the South Australian Young Liberal Movement and the Treasurer of the Adelaide University Liberal Club”, both positions proudly emblazoned directly below the moniker: “Editor, On Dit Magazine”. 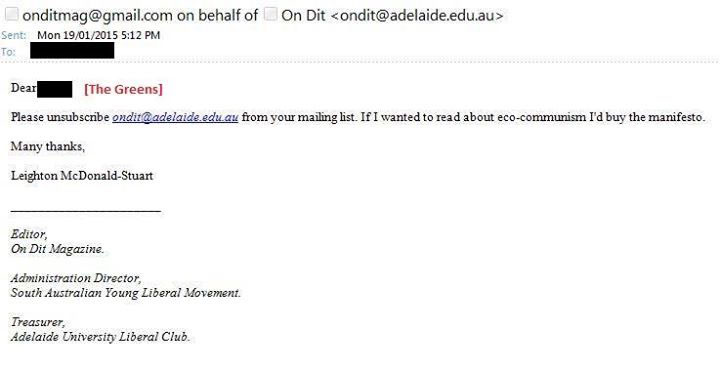 On Dit (the precise translation — ‘one says’ — evidently less relevant than the fact it’s “pronounced On Dee” and “It’s French”) has long been a symbol of the confluence of politics, the media and raw youthful exuberance. Former editors and contributors have gone on to hold high office (John Bannon, Peter Duncan) or progressed into mainstream journalism (David Penberthy, Samantha Maiden, Barry Hailstone).

Despite the latter-day conservative bent of some of its alumni, the one constant throughout much of its history has been a proudly left-wing credo. Until now.

Amid a rout of several key campus positions in last year’s student elections, the Young Libs also won the keys to the editorial offices of On Dit, much to the chagrin of their ideological opponents.

Their debut issue is yet to be published so the Left’s worst fears are yet to be realised, but this triumphant Facebook post by Liberal Club president and newly-elected Adelaide Uni Board director Robert Katsambis might provide some clue as to the editorial direction:

“Thought this day would never come. After so many years of leftist bias in your student magazine, you can now write for On Dit 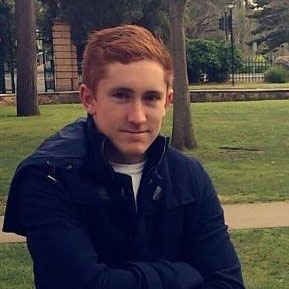 without being transgendered or Marxist. Looking forward to an excellent year Leighton Stuart #axeelledit #fascistdit”

The hashtag “Axe Elle Dit”, incidentally, alluded to the annual “women’s edition”, whose impending demise was the cause of significant consternation, on and off campus.

One-time editor, now prominent columnist, Clementine Ford took to the magazine’s Facebook site to ask: “Why have you deleted all the questions regarding Elle Dit? I realise you don’t have any editorial experience yet, but deletion of serious enquiries and questions about editorial intent is probably a bad path to set out on.”

McDonald-Stuart responded to our emailed queries with a polite “I’m afraid I am unable to comment”, but told student broadcaster Radio Adelaide in October the annual fixture wasn’t “in jeopardy per se”, though “I’m not particularly in favour of the edition”.

“We took the view that people were quite passionate about it; if people are that passionate we should keep it,” he said.

“I like to think myself and my fellow editors (Fatfat Sun and Daniel Millburn) are (representative of) regular students.”

But he bemoans as “appalling” the traditional “distinct lack of right-wing and centrist content”, and the fact previous editors have “all been left of centre, they’ve all been from the humanities faculty (and) that’s not necessarily good for the health of the magazine”, before conceding he is an Arts student himself.

“My political affiliations won’t come into the magazine at all; if I want to write something political I have plenty of other avenues to do so,” McDonald-Stuart said.

Nonetheless there’s no doubt the publication’s leftist forebears are up in arms at the notion of conservative Liberalism infiltrating their hallowed pages.

InDaily has been told the incoming editors quickly decorated their new digs with posters of Margaret Thatcher, Ronald Reagan

The new, and very “Ivy League”, logo for On Dit.

and Tony Abbott, while McDonald-Stuart proudly flaunts his allegiances on Twitter, approvingly retweeting Liberal firebrand Cory Bernardi, demanding the “necessary removal” of section 18C of the Racial Discrimination Act and extolling conservative-appointed Human Rights Commissioner Tim Wilson for “telling it like it is”.

On Dit’s 2013 editor and former student union president Casey Briggs told InDaily it was “atypical that a team so overtly political is elected to that position to run the student paper”.

“This is a team that ran for election last year telling students that On Dit was left-wing and badly-managed, and they’d be an unbiased alternative (but) everything they’ve done since has shown that’s not true,” said Briggs.

Briggs, who says he isn’t a member of a political party, acknowledges On Dit is “arguably a left-leaning publication … but I don’t think that’s necessarily misrepresenting the kind of people reading it and studying at the university”.

Whether that’s the case, it’s a high-profile changing of the guard: Katsambis’s social media post was accompanied by a video of his incredulous fellow Tories remediating the somewhat-lived-in editorial offices (“That’s mould growing on the roof,” one gasps), with the author noting: “This is what happens when you give hippies control of a student-funded office for 37 years!”

Indeed, the last time the Young Liberal ticket won control of On Dit was in 1976-77, under the editorship of 18-year-old ‘Nick Xenophou’ – now better known as an anti-pokie campaigning Senator of national standing.

The current mentality at the magazine is eerily redolent of Xenophon’s reformist zeal. His first editorial in 1977 bemoaned that “in previous On Dits virtually all topics were seen as having a political slant” (including a recent article on acne) and railed against management’s “misuse” of student funds, such as spending “$440 on Chile posters and Medibank broadsheets”.

“Instead of the old diet of irrelevant politics … there will be a greater emphasis on interests that are relevant to students,” Xenophon thundered.

“Whenever the words ‘OnDit’ are uttered it always brings back bad memories,” the Senator says now, describing his fleeting membership of the Young Liberals as a “youthful indiscretion”.

“Some people when they were young did drugs; I joined the Young Liberals,” he said.

But he insists he was an inclusive editor (“We’d run pieces that would upset my then-Liberal colleagues!”) and says he’s “happy to sit down and give advice” to McDonald-Stuart.

“I’d advise him to put his political allegiances behind him (because) maybe in a few years’ time he’ll do what I now do and look at the old copies of On Dit and cringe at some of the things I wrote … I might save him many memories of cringeworthiness in the future.”

Xenophon believes the campus mag should be more “centrist”, suggesting it is “much better to have dialogue with people on both sides of an argument”.

“If universities are places of robust discussion and critical thinking, having a paper that’s a mouthpiece for propaganda for one side or other I don’t think reflects the ethos that universities are supposed to be about,” he said.