Serious medication errors jumped by more than 60 per cent in the South Australian mental health system between 2012 and 2013.

An internal SA Health report, obtained by InDaily, reveals a 62 per cent spike in level 2 medication incidents – defined as those that cause a patient moderate to extreme harm.

SA Health told InDaily, however, that that figure has decreased by 13 per cent since 2013. The department would not provide InDaily with the specifics of that data.

The Lyell McEwin and Modbury hospitals are within the NALHN. 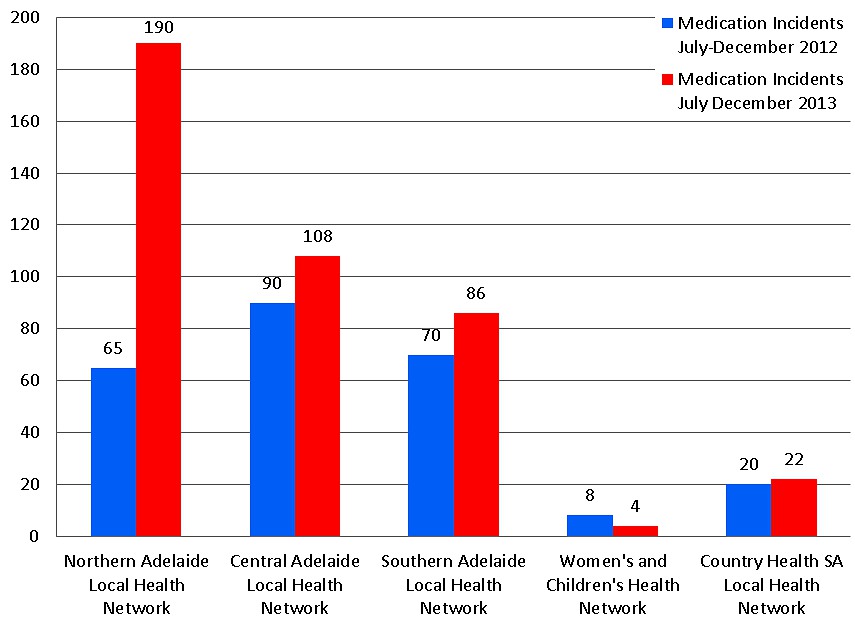 More than half of the incidents around the state were categorised under “administration of medicine”, with many of the incidents in this category involving failures to administer prescribed medications.

Level 2 incidents must be investigated by executive staff within health services.

Director of Operations and Strategy at the Nursing and Midwifery Foundation (SA Branch) Rob Bonner said the figures were concerning, but required further investigation.

He said it was difficult to understand the implications of the data, because the report did not identify the specific location of patients when the errors occurred.

“We’re not clear whether these incidents related to clients who were living relatively independently,” Bonner said.

“Year to year comparisons are therefore requiring further interrogation, if they are to be used.”

The medication incident data was drawn from the Safety Learning System, which was introduced into the state’s health system in 2011.

SA Branch President of the Pharmaceutical Society of Australia Sue Edwards said that while all medication incidents are required to be reported on the Safety Learning System, “it often depends on the focus within the hospital about reporting”.

“If the reporting system becomes easier to use … then they’re more willing to report,” she said.

“Sometimes the things that can contribute … are workloads, communication issues, fatigue. There are multiple causes for medication incidents.”

Public Advocate John Brayley would not comment on the report, but said he would be raising it with SA Health.

SA Health told InDaily in a statement that “any medication incident is taken extremely seriously, and we consistently review staff education and support to ensure practices and protocols meet national standards”.