No-one is more qualified to give a guided tour of Adelaide than legendary former broadcaster Keith Conlon.

The city’s buildings tell some of the state’s most fascinating stories, and “Mr South Australia”, who last year retired from a half-century-long media career, is a storyteller par excellence.

InDaily brings you Conlon’s unique insights with the first in our #ADLarchigram series in collaboration with the SA Chapter of the Australian Institute of Architects, where prominent Adelaideans reveal their most beloved city buildings.

The spectacular Beehive Corner is the beginning of a “look up” tour of Rundle Mall that everyone should do, says Conlon.

This gothic monolith at the entrance to Adelaide’s premier retail strip was once the city’s most popular meet-up spot.

“Now you meet at the (Mall’s) Balls, but you always met at the Beehive Corner,” he says.

“It’s an extravagant piece of gothic architecture in a non-church building. It’s a very distinguishing entrance to our main retail street.” 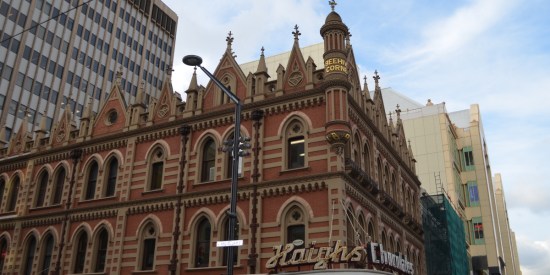 The building features polychome brickwork, with bricks of red and cream used to highlight its architectural features.

“We normally associate fancy gothic architecture with churches, and yet this is clearly a commercial building,” says Conlon.

“It’s a highly decorated building and it stands out as a result.”

South Australia’s official library is made up of three connected buildings.

The Institute Building and the Mortlock Wing, both buildings of the 1800s, are connected by the modern, glass-fronted Spence Wing.

While the Spence Wing is closest to Conlon’s heart for its boldness, he considers the classical construction of the other two inspiring.

“These are two buildings that tell a big story about the cultural boulevard of North Terrace. Everything starts here in the Institute building.

“When it started, it housed the museum, the art gallery, the library and the art school.

“The fact is, the Greeks and the Romans got the proportions right. They knew about the golden mean (an aesthetically pleasing mathematical ratio), then knew about the way in which … fenestration (the inset and dressing of windows) works,” he said.

“This is a really nice example of that.” 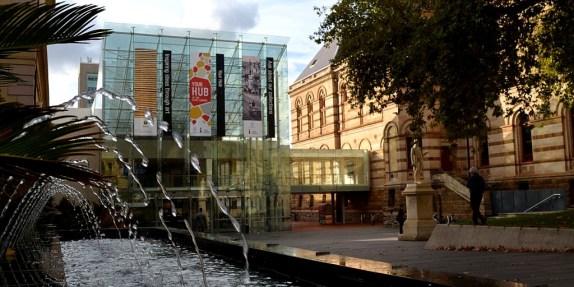 The Spence Wing of the State Library of South Australia. Photo: Bension Siebert/InDaily

“This being probably the great classical building of Adelaide, it, in a sense therefore, takes us back to the roots of democracy,” says Conlon.

At the time of its construction, Parliament House was the largest building in South Australia.

Build of brick and clad with marble, the building is Greek Revival and includes grand columns of the Corinthian Order.

But problems haunted both the design and construction of Parliament House. Originally, it was designed with towers on two corners and a massive dome.

“There were all sorts of shenanigans about the design, including the (initial) inclusion of a giant dome on the top … but eventually they built the first half only,” Conlon explains. 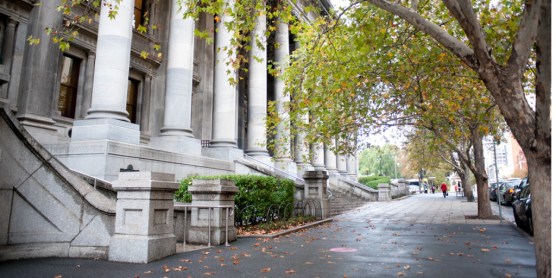 At the time, techniques to affix marble to brick were poorly developed, and rusting iron rods holding the slabs to the building failed.

A gift of 100,ooo pounds from newspaper man John Bonython helped complete the construction, which had sat idle with large sheets of galvonised iron cladding on the side facing Government House.

“We really just do take it for granted, but it’s a very important cultural spot,” says Conlon.

“Not only, of course, is it the seat of parliament, but it’s … where we come in protest … where great declarations are made.”

According to Conlon, the preeminent ambience of the city’s East End owes a great deal to the surviving façades of the Adelaide Fruit and Produce Exchange.

The market was designed by architect Henry J. Cowell in 1904 and remained a thriving retail and cultural arena until it made way for mostly residential development in 1988.

“The thing I love about it is that  it happened very organically,” says Conlon.

“If you’re growing cabbages and carrots somewhere up the river on the alluvial soil, then this is the nearest point. The first market is behind the pub on East Terrace, and then it grows from here. It turns into the major commercial produce market.

“The old produce buildings provide some of the atmosphere that a lively retail, eating area needs. It’s got to have character. This has got tonnes of it.” 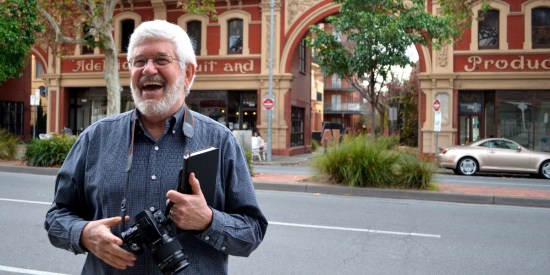 The redevelopment of the market’s interior caused great controversy, with plans to construct tall and dull office buildings on the site.

“It was going to be kind of an outcrop of the CBD commercial area rather than a mixed, lively, living, working, playing area.

“It’s one of the few good things that came out of the State Bank collapse. It halted all the possibilities that were being thought of.”

– The People’s Choice Top Ten Adelaide Buildings will be collated from the buildings you name in the comment section below.