Janette Sadik-Khan closed Times Square to cars and nearly doubled New York City’s vast bike and bus lane network in the face of strident criticism from across the US.

Even her most hardened critics often conceded they were impressed by the speed and ambition of her programs.

Devotees lauded her as an inspirational city planner.

By the end of a profoundly controversial term as NYC transportation commissioner, Sadik-Khan had won over public support and carved out a legacy which today inspires policy-makers far beyond the Big Apple.

She began a rapid-fire program to deliver safety, mobility and sustainability on the streets of New York.

“We moved quickly to show the potential for New York City streets, and what we found over time was that people loved it, and they saw how it worked,” she recalls.

“We found that the people were way ahead of the politicians and the press when it came to building sustainable streets.” 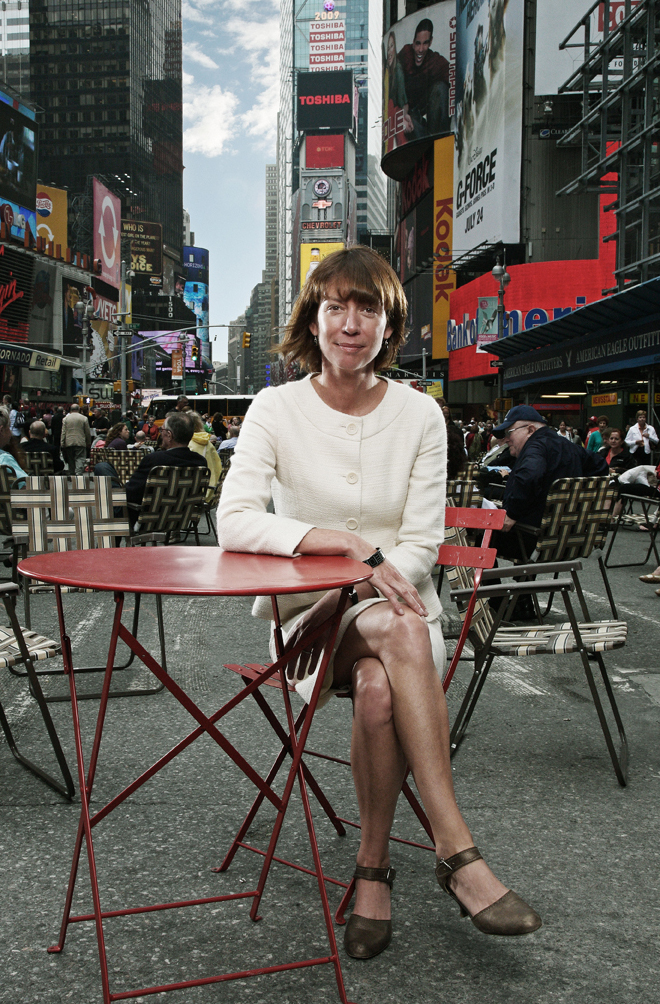 Sadik-Khan oversaw the construction of nearly 600km of bicycle lanes, including nearly 50km worth of separated bike lanes – the first in America.

“Good streets are safe streets and good for business, and I really think that there’s no better way to build a safe city than putting down a bike lane,” she says.

Temporary materials were used to “experiment” with roads, turning slip lanes and carparks into pedestrian plazas.

“On our first plaza, we converted a parking lot into a plaza with paint and tables and chairs, and saw retail sales go up 172 per cent,” she recalls.

“Three years after implementation, [it is] dramatically outperforming the rest of Brooklyn.”

The temporary nature of these projects meant that while they created controversy, critics felt assured that they would be removed if they didn’t deliver outcomes.

The most controversial of these pedestrian transformations was, of course, banishing cars from Times Square.

The square has historically been a problem for policy-makers in New York City. Before it was closed to cars, 350,000 pedestrians walked it every day, but only 10 per cent of the square was dedicated to pedestrians.

Pedestrian injuries were a regular occurance.

“Not surprisingly, what people were doing was trading the safety of the sidewalk for the street, just to get by, because there was just no room to get through,” Sadik-Khan says.

She and her team decided to trial closing the square as a pilot project.

“No harm, no foul, because we were closing it with temporary materials.

“Six months later … injuries were down 63 per cent, retail sales were dramatically up, traffic worked as well if not better than before, and so it was a home-run.

“It proves that it’s not a zero-sum game between cars and public space.”

Sadik-Khan’s approach has made waves around the world.

Adelaide Lord Mayor Stephen Yarwood credits her as inspiration for Splash Adelaide, “parklet” seating and the closure of Leigh Street.

He also considers her a role model.

Sadik-Khan had a few minutes to speak to InDaily on her visit to Adelaide for the Velo-city Global Cycling Conference this week.

She said her methods were applicable to any city.

“Small cities [and] large cities are all grappling with the same challenges,” she said.

“The challenges of land use, of development, of equity, of conjestion, quality of life … A key to that is really rethinking your streets, which are an incredibly valuable asset.”

She told InDaily that providing transport choice for all people constituted an important economic development strategy. City planners should be ensuring that people who want to ride bikes can feel safe doing so, and that residents can get onto a bus and know it’s going to be a “quality, fast option”.

“And walking, creating a really world-class streetscape and making it easy to linger and enjoy the physical beauty of the city.

“You look at a city like Adelaide and it’s got such great bones, such a great future.”