Knock, knock, knockin’ on voters’ doors has been a fading part of the politician’s campaign arsenal in recent years – yet it reared its head in the nastiest way on day five of the election campaign.

The story began quietly with the Liberal’s designated hitter Rob Lucas calling a presser to reveal copies of three notes left in letterboxes with a handwritten message: “Sorry I missed you”, “Kind regards, Katrine”.

The three notes, however, each had different handwriting. 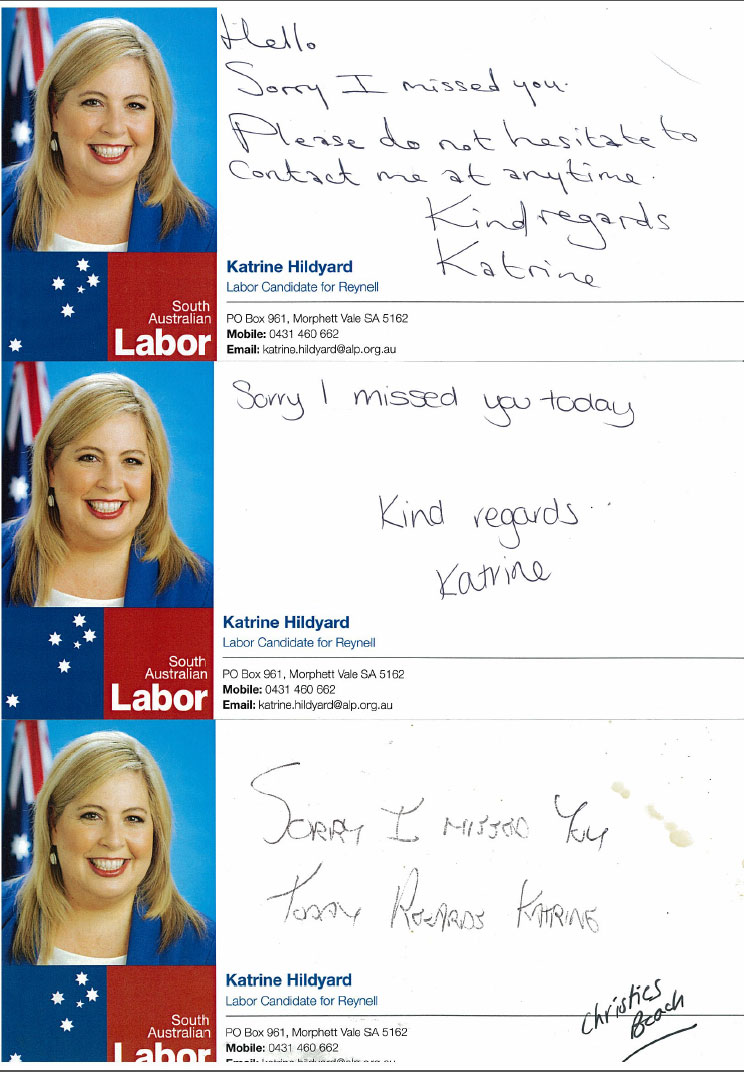 It was slack. Many candidates use printed versions of “missed you” messages and for years Labor MPs have been replacing the old-fashioned door knock with a letterbox drop inviting people to street corner meetings.

It gives the impression of contact, without the long haul up and down streets.

Labor’s candidate in Adelaide David O’Loughlin has taken to the phones, ringing voters and asking them what their concerns might be. Sure beats walking.

In that context, Katrine Hildyard’s effort seemed innocuous – until Family First stepped in and threw some petrol on the fire, closely followed by another on-the-spot stumble by the Premier.

Family First’s Rob Brokenshire used the Hildyard notes to revive memories of Labor’s hamfisted effort in Mawson on  polling day in 2010 when they had people dressed in T-shirts saying “Put your Family First”, while  handing out what appeared to be FF how-to-vote cards but were in fact far more suitable for Labor.

Accusations of dirty tricks and dodgy dealing escalated the story, especially for TV reporters who could go to their vaults and pull out the vision from 2010.

Weatherill then wandered into what he thought was going to be an easy presser on some possible “Park’n’Ride” projects.

When reporters thrust the copies of Hildyard’s many forms of handwriting he wasn’t ready for it and flatly refused to engage.

“I don’t know what your point is; I haven’t seen the documents. I’m not going to comment on something stuck under my nose,” he said.

By early afternoon the TV reporters had vision of an annoyed premier, an outraged Family First MP, dodgy campaigners from 2010 and an apologetic candidate – Gold, Jerry, Gold.

The yarn still had some bite this morning with Brokenshire rolling it out on FIVEaa’s breakfast program with the warning that the 2010 Mawson effort would be again revived closer to the election.

“We’ll be doing something about that closer to the election letting people know what shirts Family First volunteers will be wearing to distinguish them from impersonators.”

The Premier then found himself on the wrong end of another leaked document.

The Australian’s Sarah Martin asked whether it was correct that Automotive Transition Coordinator Greg Combet was getting $400 an hour.

“That is not the arrangement,” he insisted.

And then Martin produced an invoice from Greg Combet Pty Ltd to the Premier’s Department for “eight hours work at $400 per hour”. 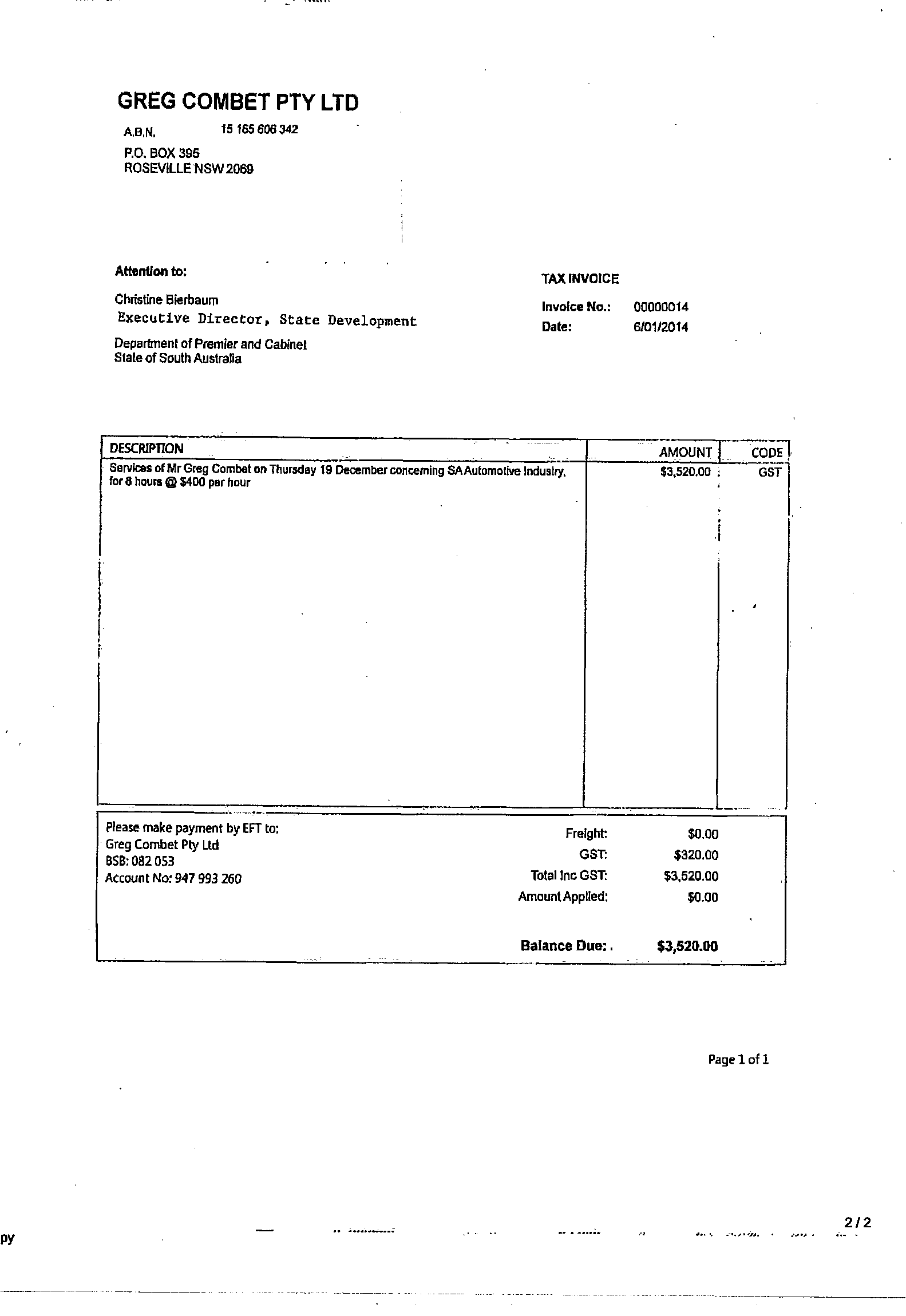 Meanwhile, not far from Reynell and the multi-skilled writing efforts of Katrine Hildyard, Independent MP Bob Such was bemoaning a dirty trick of another kind.

The Liberals, Dr Bob said, has the temerity to be running a candidate who is trying to win.

Such made two points: firstly, that the candidate had been campaigning with “election signs that didn’t disclose the party connection”. To support his point he enclosed a screen grab of Sam Duluk’s Facebook page, that had a photo of his campaign truck emblazoned with “Sam Duluk for Fisher” – and a big Liberal Party logo on the side door!

Secondly, Bob said the Liberals “have been promoting untruths that clearly are meant to mislead”.

One is a claim that “Liberals need to win (Fisher) to form Government”; the second that “winning Fisher becomes vital if we are to change the Government”, and the third that I am “likely to put Labor back in to Government”.

Perhaps the Liberals got the notion that Such could support Labor in a hung parliament when he made this statement in January: “I’m not committing to either party”.

So, having seen the demise of door knocking and the shock revelation that some candidates are trying to win, we weren’t surprised to see another home truth go by the wayside.

The Diary has always believed that one of those rare invites into the free-for-all inside the State Suite at the Clipsal 500 was a way to make effective contact with State Government Ministers.

Not so, it appears.

Concerned parent Leanne Cartledge was on ABC Radio’s breakfast program this morning taking to task the Education Minister, Jennifer Rankine, about the lack of resources in schools that have hearing impaired students.

Leanne revealed that she had spoken with Rankine inside the Clipsal suite a year ago and the Minister had told her to contact her office to arrange an appointment.

Twelve months of letters, phone calls and chats with personal assistants has failed to get the concerned parent inside the Minister’s door.

Still, she’s one up on Campaign Diary which has never been invited to the prawns, champagne and beer event that for so many years provided gossip columnists with rich fodder.