A descendant of the man who built the first bridge over the River Torrens in 1837 wants the State Government to name the new footbridge in memory of his pioneering efforts.

Iola Hack Mathews, the great-great-grandaughter of John Barton Hack, has written to the Government about her idea, receiving a reply that it was being given “careful consideration”.

Hack’s timber bridge was built in almost exactly the same spot as the new footbridge – but that’s where the similarities end.

The new footbridge is costing $40 million – Barton Hack paid a carpenter just over eight pounds to build the bridge, which was completed in 1837 using timber supplied by the colonial authorities.

Mathews, who has written a book about John Barton Hack and his younger brother Stephen’s experiences in the early days of South Australia, said using the Hack name for the footbridge would be a reminder to contemporary South Australians about the hard work of the early European settlers.

“Absolutely. So much happened in those first couple of years – everything was started from scratch,” she said.

Mathews said the story of the Hacks also provides insights into the Aboriginal people of the Adelaide plains who, in the very early years, had good relations with the newcomers. Stephen Hack even learned to speak the language before disease and colonial policies thinned and scattered the Aboriginal population. 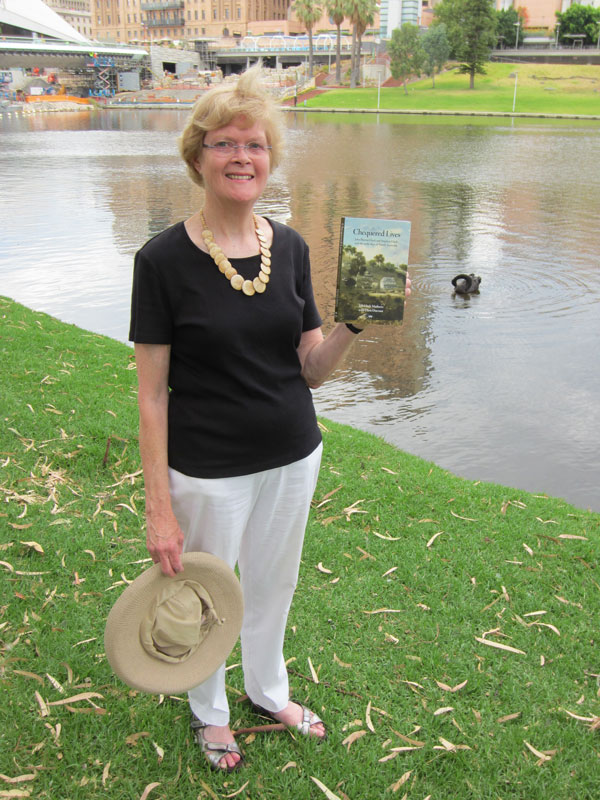 Iola Hack Mathews on the site where her ancestor built the first bridge over the Torrens.

Her book, Chequered Lives (Wakefield Press), written with Chris Durrant, details the story of the Hack family, Quakers from England, who arrived at Holdfast Bay in February 1837, and then encountered success, failure, tragedy and family division in the new colony.

The day the Hacks arrived was searingly hot – 40 degrees in the shade, according to Barton’s memoir of the day – without, obviously, any of the modern comforts to escape the roasting heat.

After initially camping in the sandhills, Barton soon found his feet, establishing a portable house imported from England where the Adelaide Railway Station now stands.

Across the Torrens, Barton had a stockyard on the site of the St Peter’s Cathedral and grazed his animals where the Adelaide Oval now sits (Barton Terrace is named after him).

Traversing the Torrens wasn’t a significant problem in the drier months, when the river became a series of ponds joined by a trickle of water. In winter, however, the flush of water from upstream could turn the river into a raging torrent.

Mathews’ book notes that the river wasn’t tamed until 1881 with the construction of the weir and the lake.

In August 1837, Barton and the Fisher brothers decided that a more effective crossing was needed, and they approached the colonial authorities for timber.

Interestingly, Governor Hindmarsh had some probity concerns – he thought it should be put out to tender, but approved it after being informed that the work was already in progress.

Barton employed a carpenter who billed him for the work on 26 September.

“It was known as ‘Hack’s bridge’ and Barton and another settler named William Ellis were the first people to cross it – with a loaded bullock team,” Mathews’ book says.

“It must have washed away at some stage, because two years later another wooden bridge was built on the same site and completed in August 1839. The location of Barton’s bridge and its 1839 replacement can be seen in the painting of North Terrace by E.A. Opie in 1841 (pictured above).”

The book, sparked by Mathews’ discovery of a trunk full of letters, diaries and memoirs, will be launched tomorrow.