2013 was Australia’s hottest year since records began more than 100 years ago, with new temperature records set in South Australia.

Average temperatures across the country were 1.20C above the 1961-1990 average of 21.8C, according to the Bureau of Meteorology Annual Climate Statement 2013 released today.

In a year the BoM said was characterised by “persistent and widespread warmth”, all states and territories recorded above-average temperatures.

In South Australia, mean temperatures were 0.41C above the previous record set in 2009.

SA recorded the highest national temperature during 2013: 49.6C at Moomba on January 12, the peak temperature in Australia since 1998. Moomba came close to that again during yesterday’s heatwave across regional Australia, with 49.3C. The hottest temperature ever recorded in Australia was 50.7C in 1960 in Oodnadatta, which yesterday reached 47C. 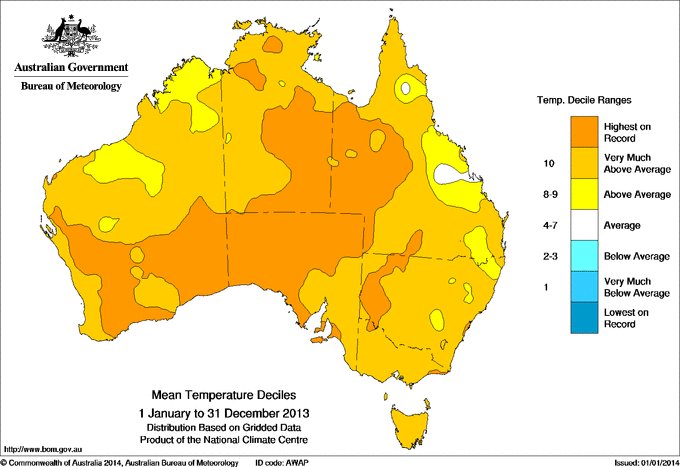 The BoM said Australian temperatures had warmed around 1C since 1950, with 13 of the 14 hottest years on record recorded since 2001.

Annual rainfall in 2013 was near-average, except for parts of northern inland New South Wales, the eastern Northern Territory, north-eastern South Australia and the inland south-east, with rainfall in the Murray–Darling Basin 24 per cent below average.

The climate statement also highlights a number of “significant climate events”, including ex-tropical cyclone Oswald, which caused heavy rain on the east coast in late January, and bushfires in south-eastern Tasmania and in Victoria during the January heatwave, and in the Blue Mountains in October.