Elyas Alavi’s studio occupies a sliver of space out the back of an old Christian church, at Holy Rollers Studios in Prospect, but many of the photos pinned to its floating white walls depict a tiny, corrugated iron mosque 390 kilometres away – one of Australia’s oldest mosques, established 135 years ago in Broken Hill.

The mosque, which was built by Afghan cameleers, now operates as a museum and includes photos, texts and other historical objects that tell their story.

“I’m working on a project about the cameleers,” Alavi explains.

“They’re known as ‘Afghan’ cameleers but they were from different places: India, Sri Lanka, Bangladesh, Afghanistan, Pakistan, even Egypt and Iran. It’s fascinating, and there’s so much to find and learn from, I feel like I’m just at the start.”

Alavi isn’t the first artist to explore the cameleers in his work, but by visiting the places they lived and worked – Oodnadatta, Coober Pedy, Broken Hill, Medindie and Port Augusta – and the words they left behind, he hopes to better understand who these men were, how they lived, and how they felt. 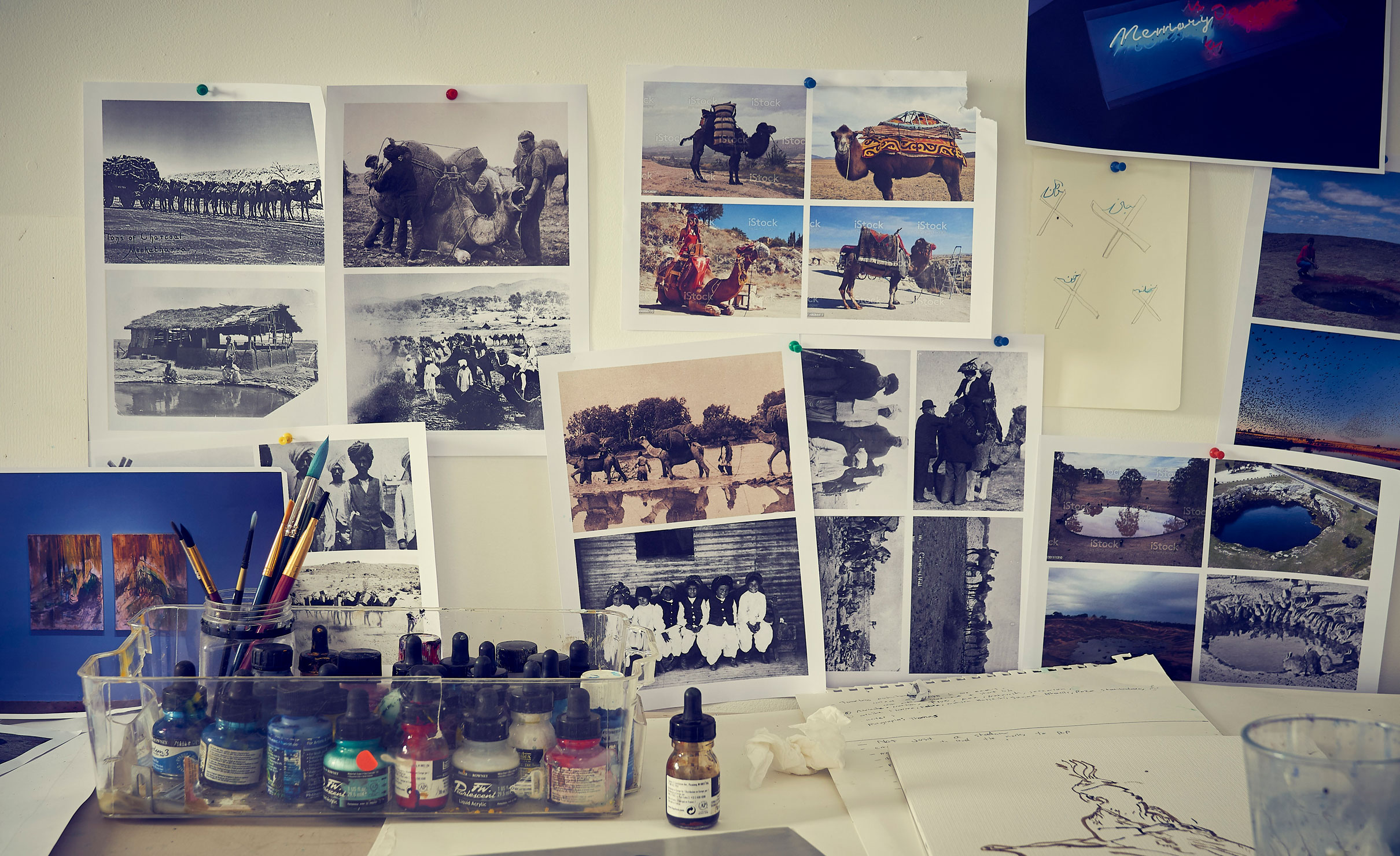 “This project is called Not Just a Shadow, kind of saying, they were real people,” Alavi says of the body of work inspired by his travels.

“Because I have that connection to places like Afghanistan, it’s quite emotional really, to go there and find these very small spaces – most of them were literally a shed that in summer would be very, very hot. And then seeing the notebooks where the cameleers were writing in Farsi or Urdu; sometimes they were just scribbling made-up words, and in a way, I imagine them trying to teach someone else – or just daydreaming.”

The notion of these men lost in thought, or dreaming, spoke to Alavi.

“I have lots of dreams, and sometimes I write them down,” he says, pointing to images of two paintings currently exhibited at Melbourne’s Substation art space, where Not Just a Shadow is showing as part of the Hyphenated Biennial (before heading to Post Office Projects gallery in Port Adelaide from May 8).

“The first one is more of a self-portrait; you see that person laying down as if they’re asleep – that’s from the experience I had in Oodnadatta, where I found this very isolated cemetery. There’s five cameleers buried there, but there’s no names.

“When I got there it was sunset, and then moonrise, which was magical and brilliant – very yellow, and a bit of red. I’ve never seen a moon that big, and it felt really close. It’s a self-portrait, but it could also be me imagining them resting, or daydreaming, with those colours surrounding them.” 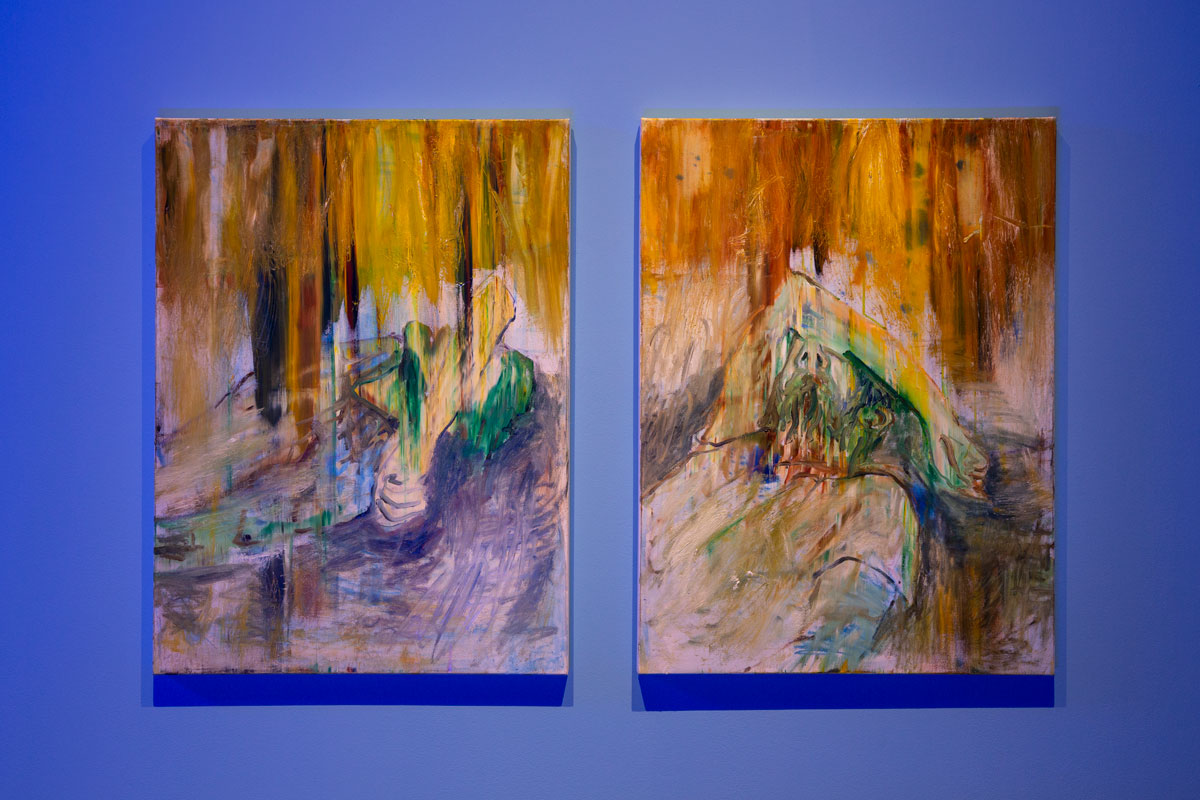 By retracing the cameleers’ steps and dreams, Alavi felt a deep resonance with their long hours of contemplation, longing, grief for the homes they left behind, and eventually, an affinity for the country they traversed.

“I feel like they had a very tough time; they had so much loneliness, you know, thinking about their families back home, and many could not go back and died here.

“There’s that total silence, but it’s a peaceful silence, and I feel like that would comfort them, too.” 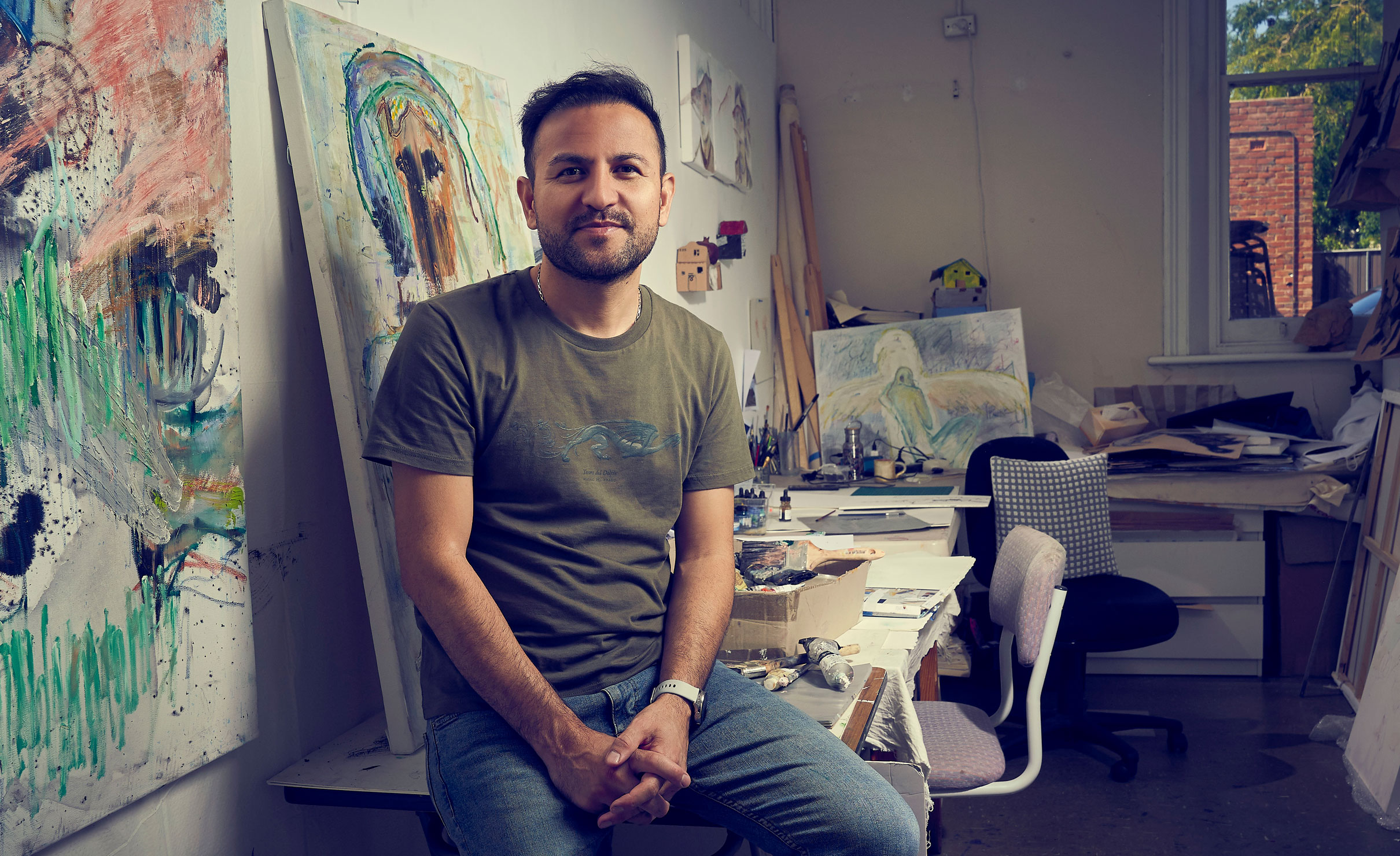 Elyas Alavi in his studio. Behind him is a painting – ‘partially a self-portrait’ – he did last year in response to violence and trauma in his home country. Photo: Aubrey Jonsson

Other paintings in Alavi’s studio come from his research at Flinders University Museum of Art (undertaken as part of his Guildhouse Collections Project residency), where he found inspiration in the work of artists including European printmaker Käthe Kollwitz.

“My work is about looking at how those artists respond to violence, war and trauma. Kollwitz, in particular, could magically absorb what she felt at the time – when I look at her work I feel like I really experience a bit of what she felt. A strong and really deep sense of pain and sorrow and grief in her work, because she also saw war, and lost her son.”

That sense of loss and displacement echoes through snapshots of objects, old photos and makeshift grave markers shown to Alavi by the Broken Hill mosque’s 83-year-old caretaker, Amminnullah Robert Shamroze. While Shamroze has done his best to maintain what remains, Alavi was disappointed to learn how much evidence of the cameleers’ lives has been lost over the years – as if theirs was a less valid chapter in Australia’s history.

He’s been experimenting with collage works based on these photographs from his travels, overlaying shots taken at cemeteries and other locations with calligraphy inspired by the words he read in those notebooks. Some of the lettering is cut out of photographs Alavi took back in Afghanistan: “I cut them up and used them – as if a part of the land was there, then their spirit could return.”

As an Afghan-born Hazara man now living in Australia, the upheaval and loss experienced by Kollwitz and the cameleers weighs heavy against the marginalisation of more recent waves of migrants and refugees from his corner of the globe. In such a context, the work of bringing their stories to life has a keen edge. Or, as Alavi spells out in one of the neon works featured in Not Just A Shadow: “Memory is a Dagger.” 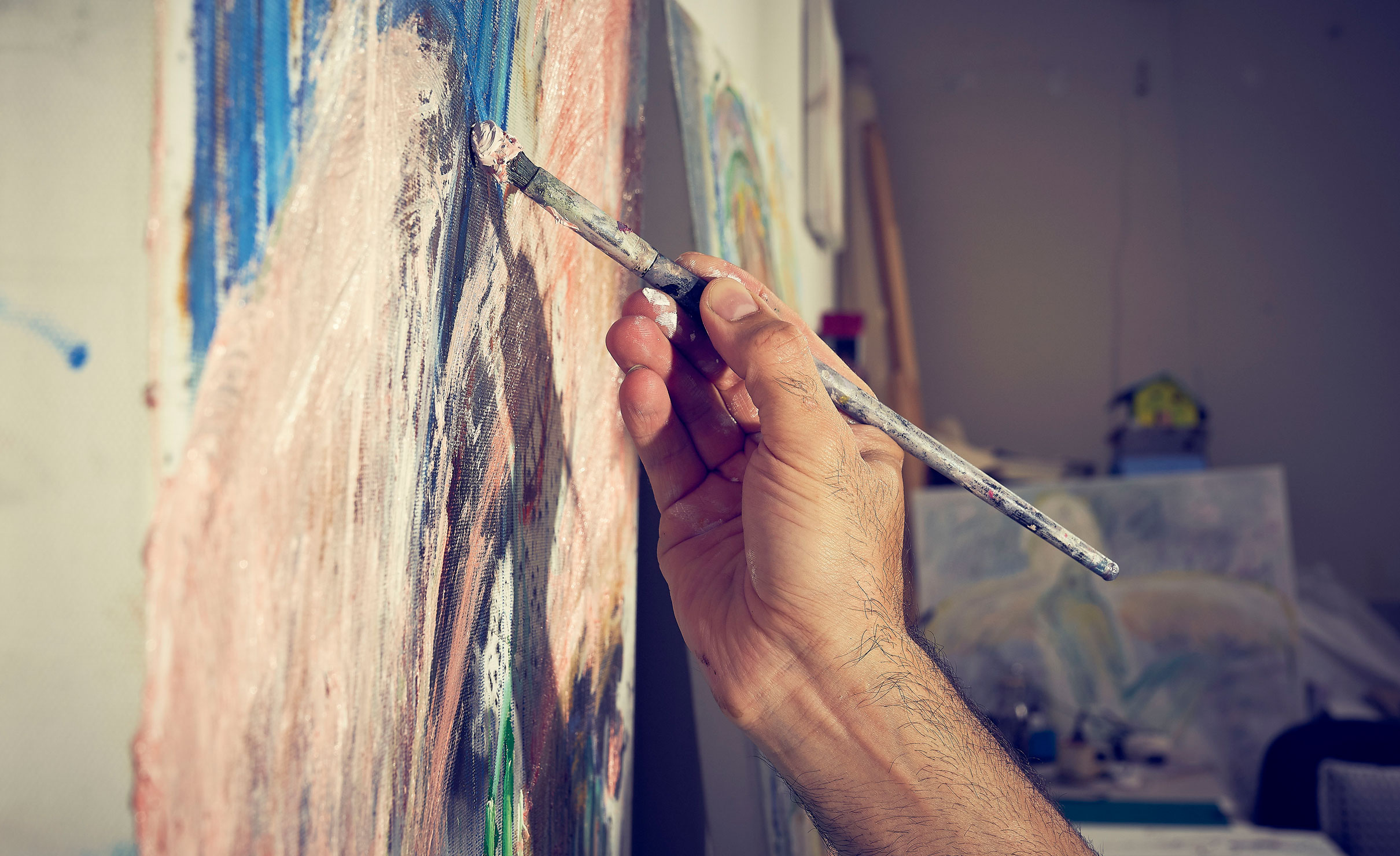 Elyas Alavi is one of three 2022 Guildhouse Collections Project artists creating new work in response to the Flinders University Museum of Art’s collection of European prints. You can read more about Alavi and his arts practice on his website, and about the Collections Project here. Not Just a Shadow is showing as part of the Hyphenated Biennial and will then be on display at Post Office Projects (POP) in Port Adelaide from May 8.