Dr Natalie Harkin’s archival-poetic installation Apron-Sorrow / Sovereign-Tea is an accumulation of years of research and conversations, with a touch of archive fever. Developed in collaboration with the Unbound Collective, Aboriginal artists, academics and storytellers, it provides a conduit for Aboriginal women to converse with both ancestors and successors.

This installation is set up at Waterside, now the home of Vitalstatistix, which was originally a workers’ hall built by the Waterside Workers’ Federation in 1926. This venue was also once a base for early Aboriginal activism in South Australia. Many of the Aboriginal women honoured in the exhibition were once domestics who were deprived of labour rights. The choice of location is ironic and apt.

Apron-Sorrow / Sovereign-Tea is made up of many parts. A set table and four chairs take centre place in the hall, enclosed in a circle of light. A leadlight tryptic portraying Aboriginal women at work is suspended above the stage. This work, See Her Shining in the Sun, was created by Narungga artist Sharene Vandenbroek by commission. 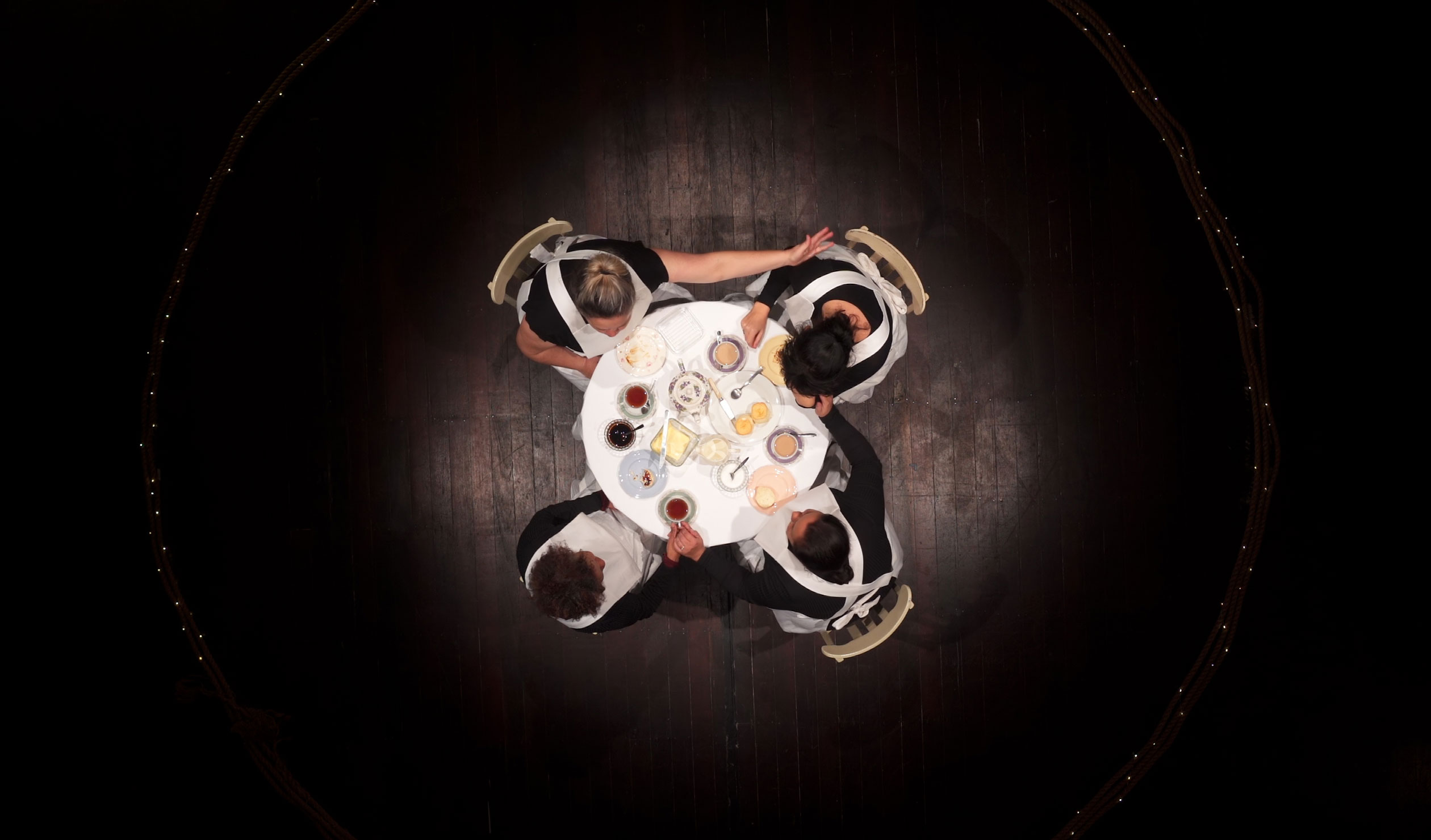 A set of four short films – created in collaboration with the Unbound Collective – screen on white sheets that hang on three washing lines. Backdrops of perfect blue skies, vivid sunrises and sunsets. And Aboriginal women sweeping, sweeping. The viewer is lulled by the sights and sounds of rhythmic movement.

For All Our Women of the Sun pays homage to the 1981 drama series Women of the Sun. The ironically titled Days of Our Lives imagines the life of a domestic from morning to night: washing, scrubbing, sweeping, dusting and sewing.

Sovereign Tea was inspired by a Lou Bennett song, and reimagined by Katie Inawantji Morrison on violin and Simone Ulalka Tur on vocals. Aboriginal women dressed in long white aprons are seated at a table; briefly resting their feet, sharing laughter and sorrow, before returning to the household’s demands.

In Domestic Waltz, four women scrub, sweep and mop. In between they dance in colonial hoop-skirts made of copied archival records. Words written in sand, such as Stolen and Sovereign, appear and disappear as they clean the floor. The soundtrack is the song My Tjamu, sung by Simone Ulalka Tur and Lou Bennett. Simone’s mother, Mona Ngitji-Ngitju Tur, wrote the original poem this song is based on, and the poem hangs on a washing line alongside white linen undergarments.

Who were the women that washed and bleached the linen? Toiling over large coppers of boiling water. What happened to the women whose backs hurt as they lugged the washing and swept the floors? Sweating for a household they were never really a part of. The answers are found in the Memory Stories. And the reasoning of combining Apron with Sorrow becomes clearer.

The other duo in the title, Sovereign and Tea, is also evident in different elements of the installation. The kettle has been boiled and grandmothers, mothers, aunties and sisters are ready to share laughter, heartache, good news or gossip. Tea is also colloquial for juicy gossip or real talk: someone has the tea and they’re prepared to spill it.

Apron-Sorrow / Sovereign-Tea spills the tea to unflinchingly show the truth behind state-orchestrated servitude. There is more to this story than rhythmic sweeping and well-boiled washing. Both sweat and tears were wiped on those aprons, by Aboriginal women who toiled for the white master and mistress of the house. However, in the sharing and spilling of tea there is also sovereignty. Aboriginal matriarchs were, are and will always be staunchly sovereign.

Apron-Sorrow / Sovereign-Tea is presented by Tarnanthi and Vitalstatistix at Waterside, 11 Nile Street, Port Adelaide. It runs until October 31, and is open Thursday to Sundays. On Saturday, October 30, Natalie Harkin will be in conversation with Jackie Huggins. A tea, titled Sovereign Tea: stir with intent, has been created by Brewed by Belinda and is available for purchase from Vitalstatistix and Art Gallery of SA, with profits going to an Aboriginal women’s shelter.

A sister exhibition, Sovereign sisters: domestic work by Ali Gumillya Baker, can be viewed at Flinders University Museum of Art.

Karen Wyld is an author living on the south coast of Adelaide. Her second novel, Where the Fruit Falls, won the 2020 Dorothy Hewitt Award for an Unpublished Manuscript. Her children’s book, Heroes, Rebels and Innovators, was released in July 2021.