Post Office Projects Gallery is a space dedicated to furthering artistic practice and experimentation through the presentation of work by early and mid-career artists and curators.

Suzanne Close, curator of the current exhibition, Adelaide X, selected the artists based on their history of working together, known in the art world as collaboration.  When this occurs, she says, “they combine their shared knowledge but there is also a third element. One that is playful, risk-taking and deeply inquisitive”.

Is Adelaide X essentially about the collaborative process rather than the product? If so, perhaps the works aren’t meant to have a lot of agency, no more than, say, technical or scientific models. What saves this exhibition from the fate of a science week, show-and-tell project are the artists themselves, who have injected sufficient irony, humour and craziness to destabilise any casual reading.

Nicholas Hanisch and Cassie Thring perform the Mississippi Misstep in a quirky sculpture, Every Idea We’ve Ever Had, which looks as if it’s been retrieved from a dumpster bin out the back of the Galileo Museum. Peer into the two battered telescopes with someone else and get the feeling that you are not seeing eye to eye. In a series of joint statements, the artists offer insights, such as: “You don’t really decide to collaborate, if you are lucky collaboration finds you and offers up new ways to think and discuss joint concerns.” 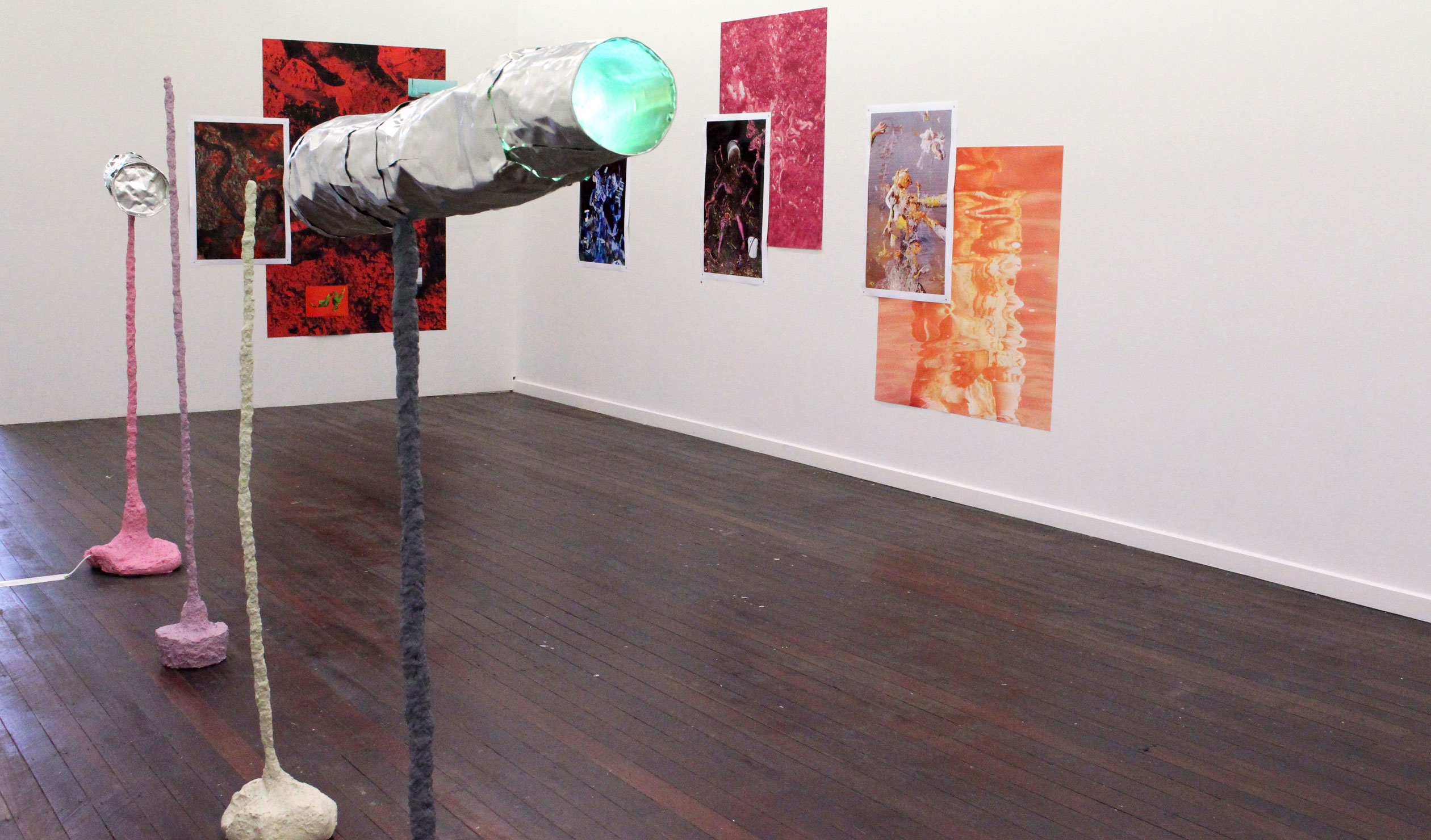 Go crazier. Try Sasha Grbich and Kelly Reynolds’ Satellite City, a mind-bending mash-up of Don Dunstan’s utopian vision for the satellite city of Monarto and his penchant for the safari suit and pink shorts in. In this installation, the “shorts” have become building bricks, metaphorically conflating Dunstan’s new-age city dreaming with alternative modes of living.

Grbich and Reynolds’ research took them to Monarto. “We explore the potential of the wild by approaching Monarto not as a ruin – but as a fully realised utopia – inhabited by wild animals and first imagined by a man in a safari suit,” they say. The mournful sound accompanying the installation is a recording of a Lisbon pigeon whistler. Of course. The artists comment: “The whistle sound is unusual, being a merging of human and bird sound that cuts through the surrounding city hum – we liked this bird/human hybridity.”

Did I say crazy? There is a “meat curtain” composed of impressed feral animal prints in clay tablets. At this point it looks as if the collaboration was going way off the screen. As it should. 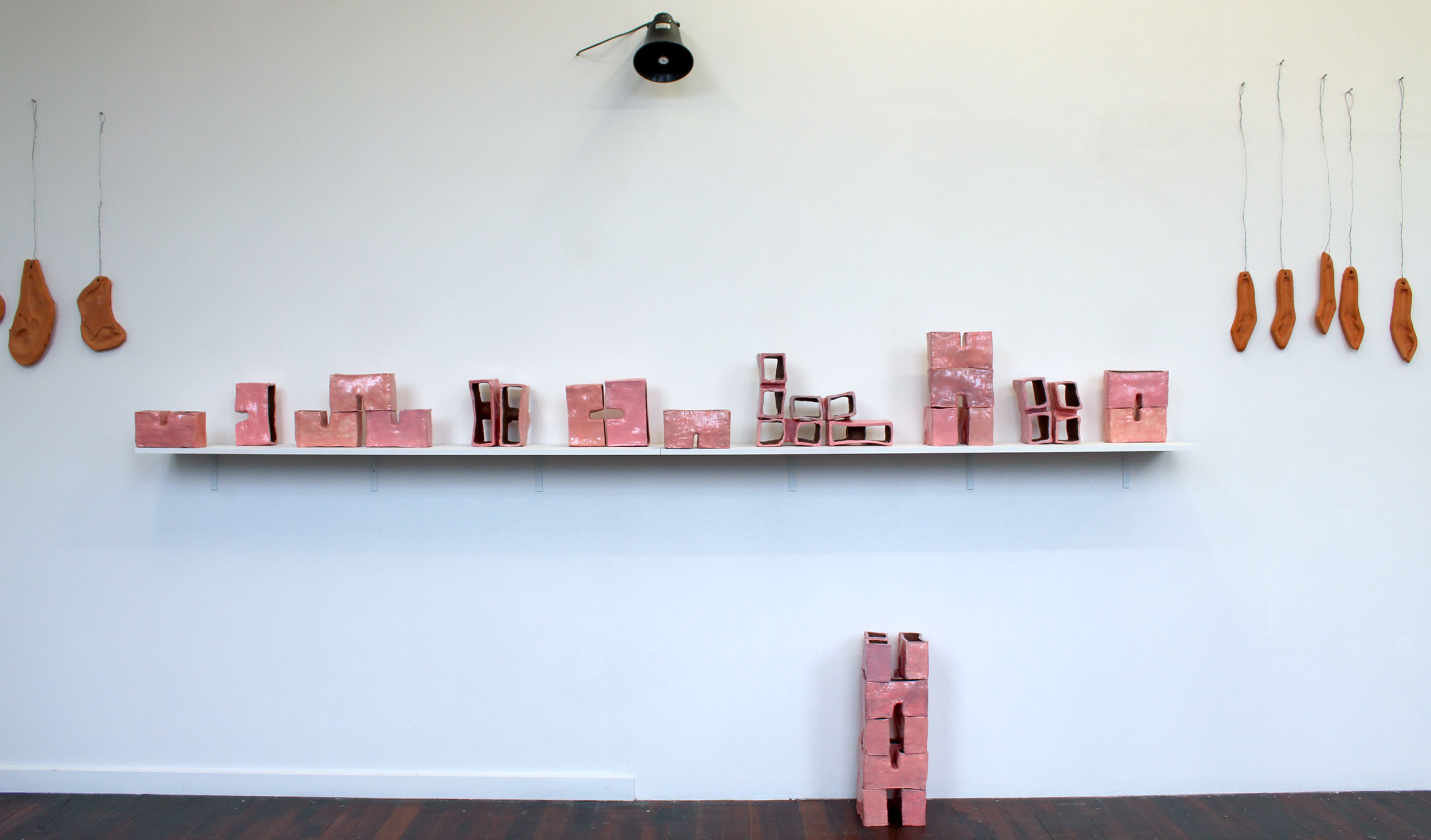 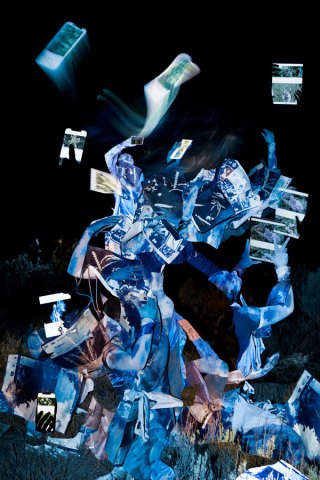 Collective energy is also evident in Rosina Possingham and Brianna Speight’s Breaking Ground series of large photographs collaged onto the wall like electronic white-board exhibits in a cop drama. Itemising their research into subjects including samphire protection and saving the planet one worm farm at a time would require its own website. This is one research venture that’s only getting started. It helps to know a bit about hyperspectral imaging to better appreciate the big red images of stressed out mangrove and riparian zones.

Allied to this exploration is a series of wilder images in which worms and people appear locked in some latter-day Laocoonian struggle for supremacy. When researching save the planet, urban food movements and projects, all roads led, as the artists discovered, to Worm Boy. The jump cut photo-shopped images in the show are products of a collaborative mode of working, flicking one set of images on a computer screen, to another, like ping pong. As for what these curious images mean, look at it as lucky dip in the compost heap time. You never know what you’ll find. 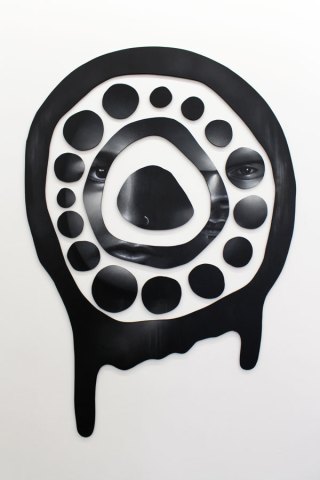 Elizabeth Yanyi Close’s public art murals have become a familiar feature in Adelaide’s urban landscape, characterised by bold linear and organic configurations in which a “melting” motif makes an occasional appearance. One of her works enhances the entry to the Post Office Projects gallery. Thomas Readett often draws on his training and skills in classic pictorialism to create shifting illusions of self, set in multivalent contexts. Their duo act in this exhibition consists of a single image, Duality ­– fleeting fragments of faces, looming out of a whorl of dark lines.

Readett says of the collaboration: “It was fun to find balance between her (Close’s) bold intersections and my dream-like fading mark-making … Because the project was about us as a duo, I thought it necessary to paint our portraits colliding in the space, but also reflecting on First Nations’ leadership coming out of the darkness and into the light.”

Spacetime, by Inneke Taal and Nicole Clift, imposes some sense of reality on this shadow-puppet play of possibilities. But only to a point. A suspended projection screen in the stairwell offers two different perspectives on marbles: sometimes directly following gravity and tracking the curvature of the suspended screen; from another view, rolling against gravity, away from the centre and colliding with the wrong momentum. The artists say they enjoy playing with such paradoxes and anticipate rolling this set of possibilities further. Physicist Brian Cox gets quoted on the matter of everything moving in straight lines over the curved landscape of space time. Which is perfectly understandable until you stop to think about it.

Curator and artist Andrew Purvis, opening this exhibition, urged everyone to be brave and joyous. Embrace the opportunity. 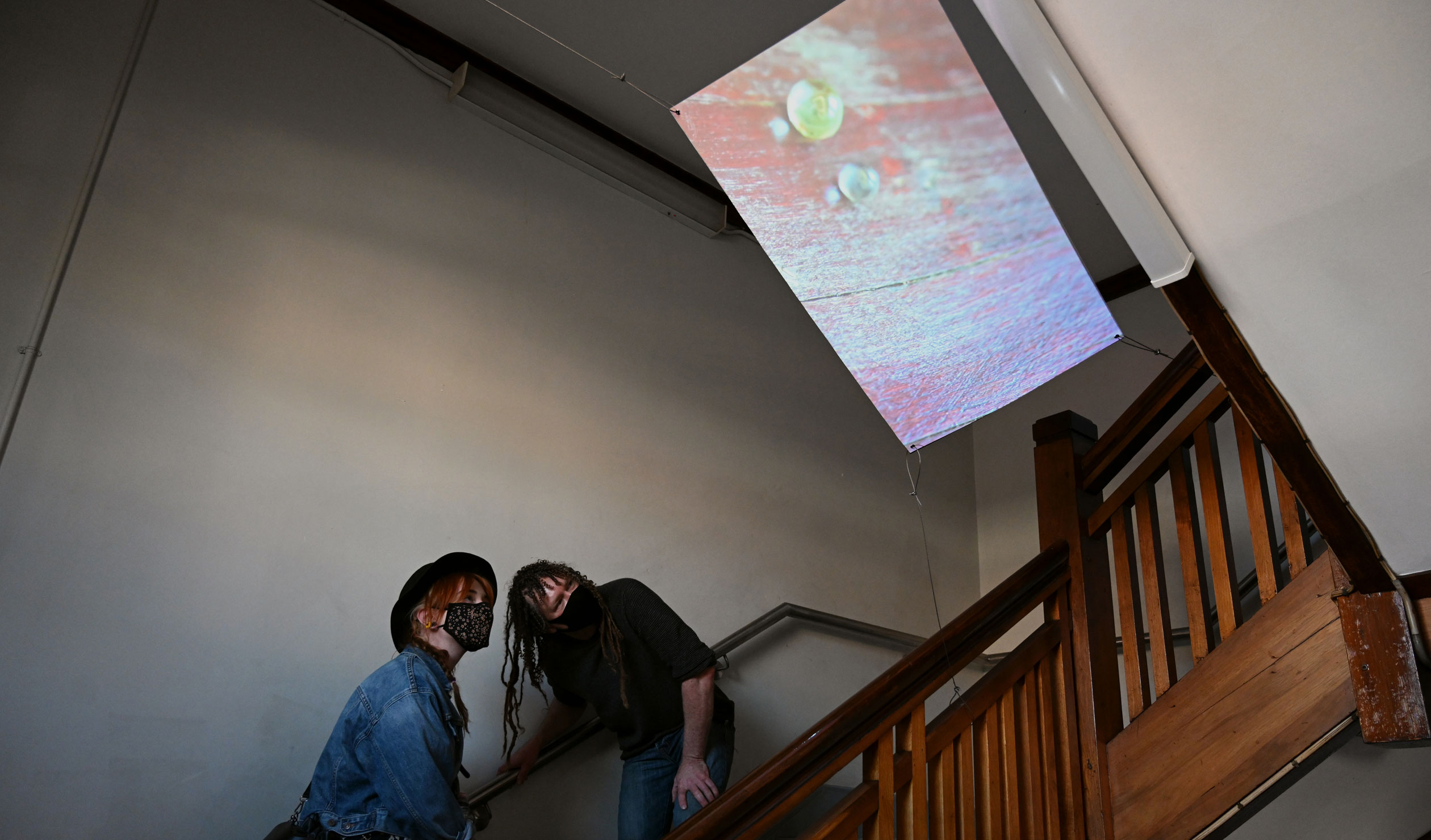 Inneke Taal and Nicole Clift’s spacetime, a work offering two different perspectives on marbles, is projected on a screen in the POP stairwell. Photo: Henry Wolff