There is a lot of public art around Adelaide these days doing good service by humanising local environments. Much of it is design. Sometimes it becomes art, and occasionally exceptional art. For this to happen the work needs that X factor, usually in the form of an exciting concept, visual savvy, site connection and, above all, a reason to live.

On this basis, particular aspects and individual pieces work for me. It’s personal, but when looking for exceptional art, always go hard and ask the tough questions. After all, you’re a stakeholder. It’s your public space.

Check out Michelle Nikou’s Paper Bag, on North Terrace. It’s only a paper bag but it’s been given the honorific of being cast in bronze, and put on a plinth like “real” sculptures. On an anti-heroic scale, I really rate this work.

Johnnie Dady’s cast iron “piano” (Standing Work no. 3) is located on the grounds of Adelaide University. Being a cast of a piano facsimile original made from cardboard and sticky tape, it looks like a honky tonk in need of a Bex and good lie down, but its presence near to the Elder Conservatorium suggests that it wants to hang out with the grand pianos.

Craige Andrae’s Old Dog is a big pink hound who has been marking out his territory around the city. He’s now wearing a bucket collar and a band aid. If he survives he might just become a legend – like “Scotty”. Old Dog was last sighted in Whyalla. The artist likes to think of him as “missing in action”. 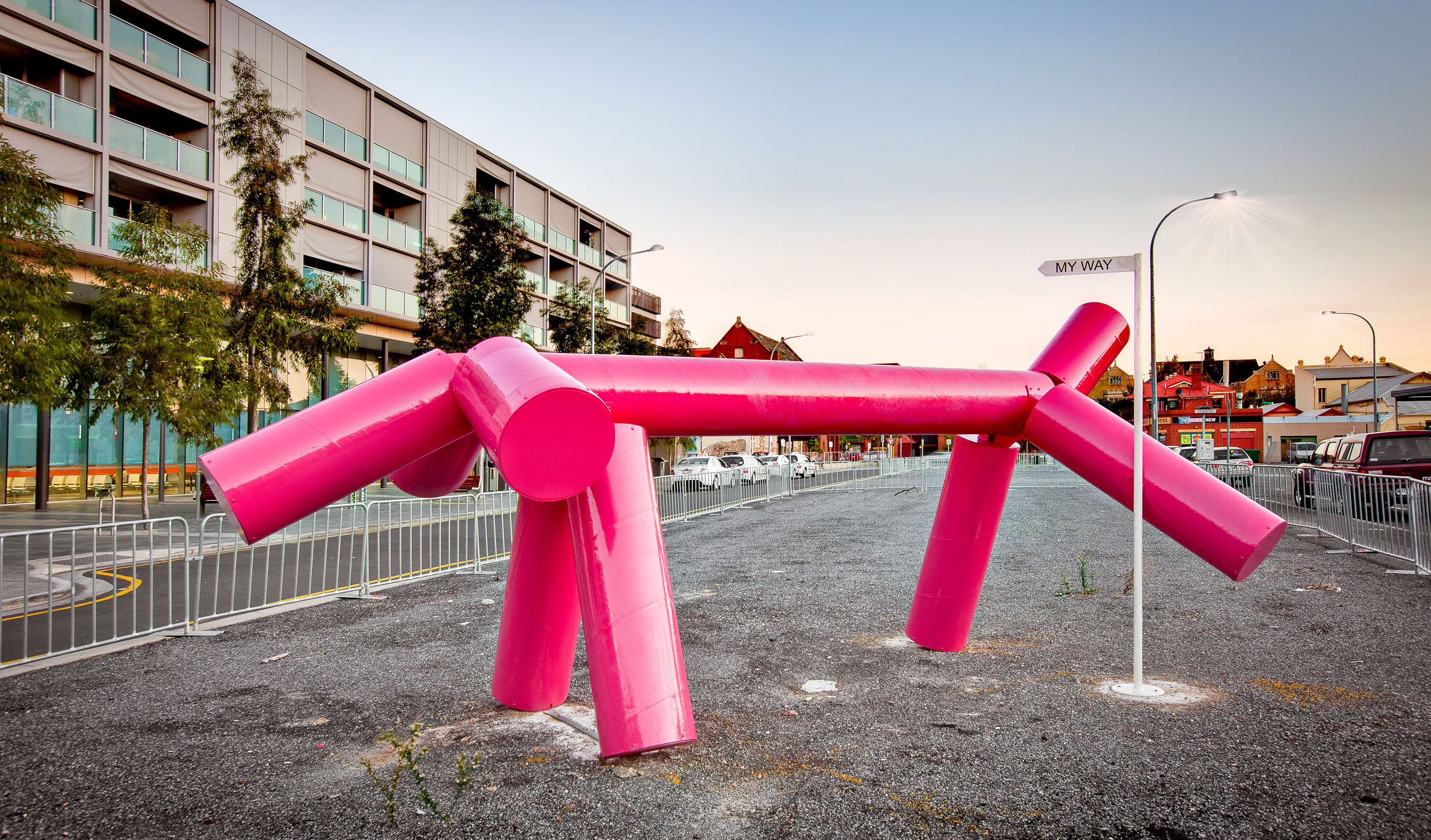 This is a tough commodity rarely found in publicly commissioned works which generally avoid controversy. Peter Drew deserves his national/international reputation of a street provocateur for his “Real Aussies Say Welcome” posters. These temporary works won’t be around in a hundred years’ time but in their short lives, they’ll have been eyeballed by thousands.

Aleks Danko’s work is always edgy. His Songs of Australia Volume 3 – At Home red-brick pop-up in the Lion Arts Centre takes the vacuity of the great Australian dream into the bland heartland of nicotine-hued civic architecture. Now here’s public art with real attitude. So, too, is Margaret Dodd’s iconic The Fossil (an embedded FJ Holden), at the Birdwood Mill National Motor Museum. 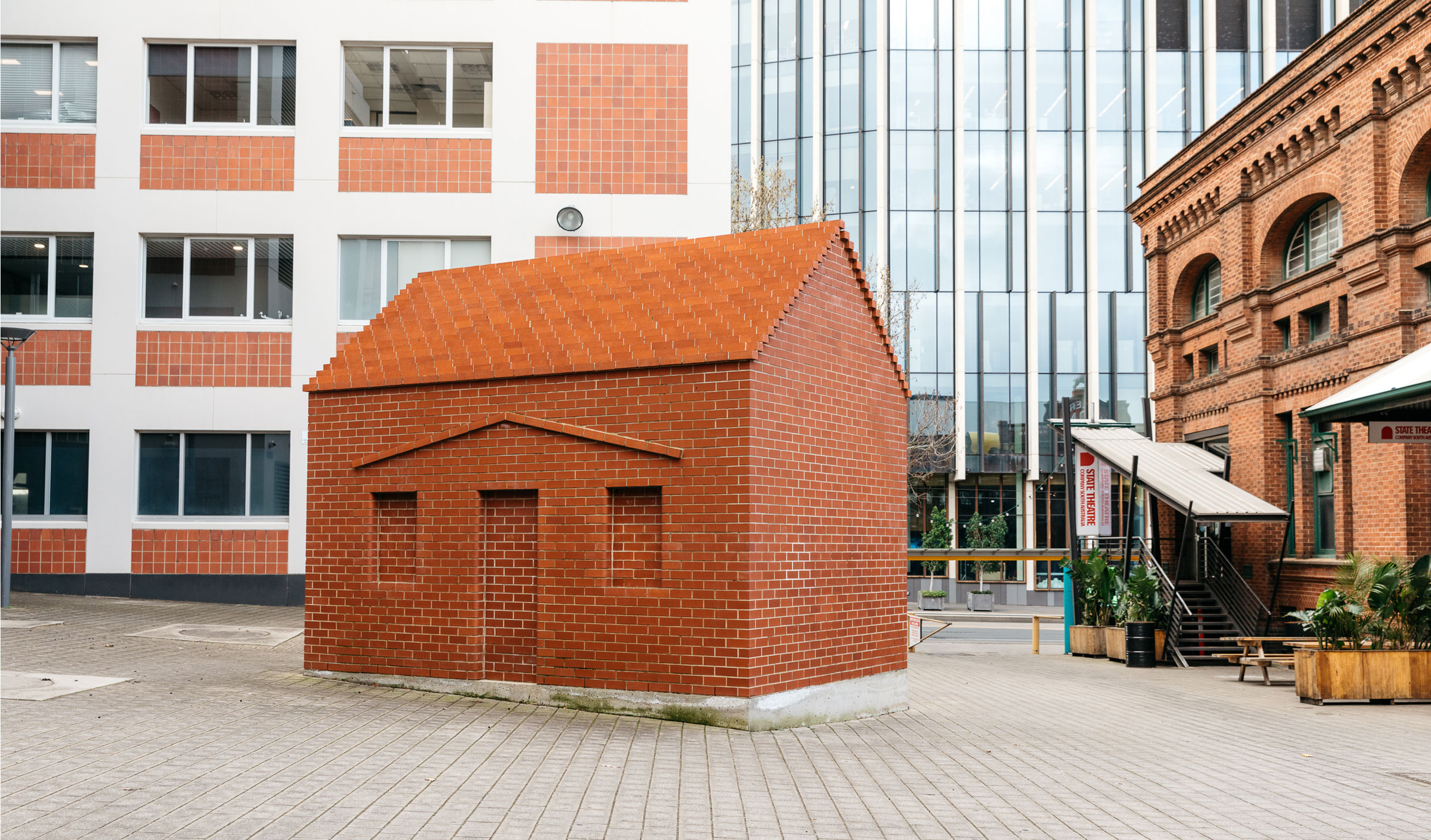 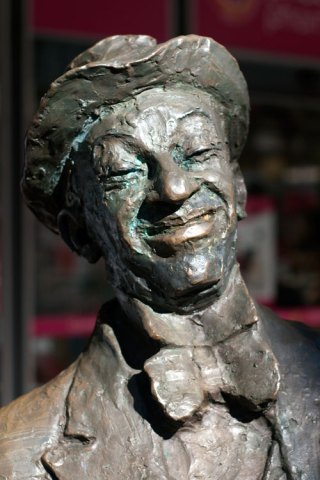 Memorials are public sculpture’s bread and butter. Robert Hannaford’s Roy (“cop this young Harry”) Rene in Hindley Street is one of this city’s most engaging figurative sculptures, a canny mix of realism and subtle editing of form. And, being on the pavement, “Mo” is one of us, ready for a selfie. All figurative wannabe sculptors who think laser-cut steel, charm-bracelet cuteness is enough to ingratiate public opinion should be made stare at this work and try to learn something about rendering the human figure.

Karen Genoff’s bronze-cast The Apron, in Ebenezer Place off Rundle Street, with its workman’s apron, wheelbarrows and assembly of crates and vegetables, commemorates “the people of the Adelaide Fruit & Produce Exchange who brought colour & life to the East End between 1904 and 1988”. Not generally known is that the work sits right on the “32 metre line”, the demarcation between the remaining “Little Paris of Adelaide”, as it was known in the ’80s, and the development site known today as the Garden East apartments complex. It’s a reminder of the battle lines that were drawn at the time between developers and defenders of living and material heritage sacrificed to visions for a more “vibrant” precinct. 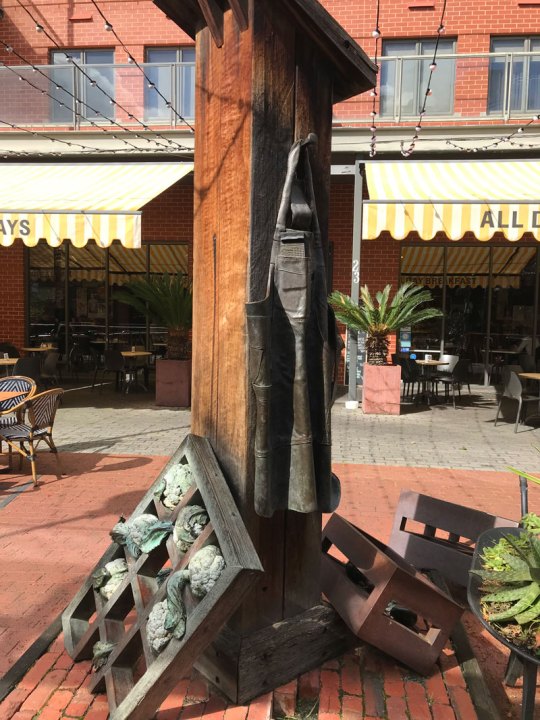 Why any community should be satisfied with effigies of creatures posing as serious public art is a mystery. The key word is “art”. Something has to happen. Make connections. Tell a story. Just do something.

On that basis, some works deliver. On the banks of the Torrens behind the Zoo is John Wood’s River Markers, with its commemoration of flora and fauna prevalent along the banks of the Torrens at the time of colonial settlement. The idea of celebrating tiny, vulnerable creatures with big sculptures is a heart-warming gesture. So let’s hear it for the Blue Spot Goby. 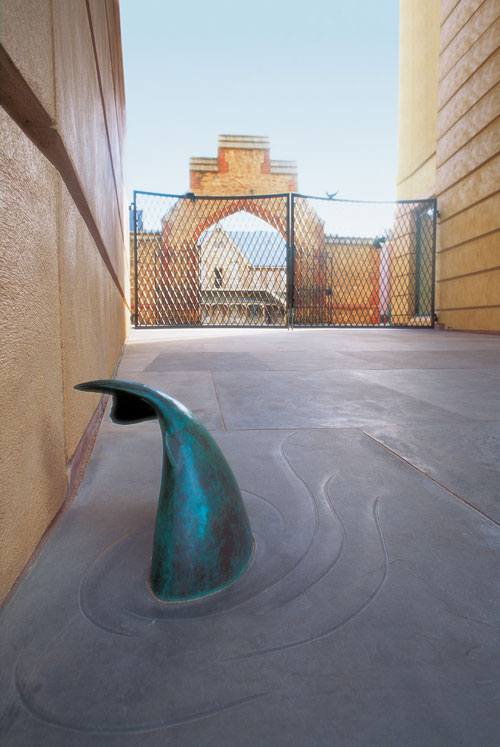 Catherine Truman’s Slate pool walkway (aka Fish Gates) at the Art Gallery of SA is an immersive experience which encourages shoals of people of all ages to swim into the gallery courtyard through the net-like gates. Wannabe sculptors who think that by sticking any old fish (or pelican, for that matter) onto a pole that they have made art are fooling themselves and their communities. Slate pool says, “Be inventive. Be ahead of the game”.

Angela and Hossein Valamanesh’s 14 Pieces water feature in front of the SA Museum is based on the fossilised vertebrae of the Ichthyosaur. Being a distant ancestor of dolphins should add a cute quotient to this work. But there is nothing cheesy about this sculpture, just a distillation of scientific fact, deep time and disciplined aesthetics.

Paul Sloan’s Pigeon in Gawler Place joins the pigs in celebrating feral behaviour. The artist’s claim that these creatures are “proud flaneurs, promenading through our leisure and retail precincts” reads as a tongue-in-the-cheek valorisation of shopping culture. Apparently it’s fun and good for business – unlike real CBD pigeons, which are a public nuisance. Looking at this (hopefully) ironic work, I kept thinking about John Wood’s River Markers and its reminders of all the species that once populated the Adelaide area at the time of colonial settlement. The message underlying this work should prompt our “feathered friends” admirers to consider “re-wilding” public art policies to commission art which reminds us of what was here, what remains and how to sustain it. So dump any dreams of a giant, stainless-steel rattus rattus (to complete the feral trifecta) and bring on the all-conquering echidna. 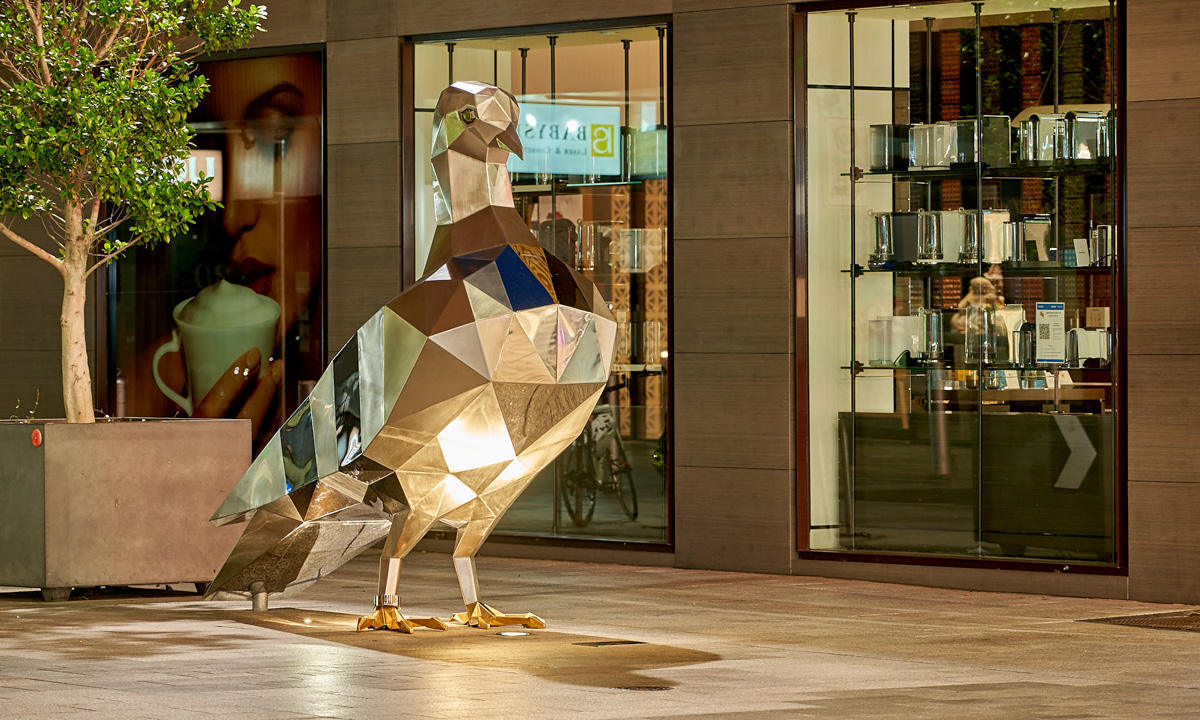 Before dismounting from “creatures”, consider that on Anzac Day members of the Barossa Light Horse Troop lead a commemoration of fallen soldiers and the thousands of horses who did not come home from World War I. Apples, carrots and flowers are laid on the Light Horse Memorial Horse Trough on East Terrace. Forget art for a moment. This simple block of stone carries the emotional weight of generations. Think about that next time you’re looking at something that in the name of “public art” is filling in some corner or avenue with an aesthetic gesture or flip quip.

Collaborative processes continue to ensure that public artworks marking Indigenous history and culture achieve potential. Consider the Warriparinga ­– Living Kaurna Cultural Centre. At the entrance to Warriparinga is the Tjilbruke Gateway. This “forest” of tree trunks was created by Margaret Worth and Gavin Malone, working with Kaurna artist Sherry Rankine, and tells the story of the Kaurna ancestral being Tjirbruke. Like many community-inclusive sites it offers an unfolding, immersive experience and is the stronger for that.

Up north, at the Greenfields wetlands, Salisbury, there’s a different kind of work, Together Woven, created by Marijana Tadic and Alexis West. It marks a Kaurna hunting practice involving throwing boomerangs into flocks of birds. That it has been conceived as an artwork is evident in the striking way of interlacing units to trap light, evoke a flock of birds and define the boomerang shape. Clever. Most importantly, it gives suburbanites a point of connection with Kaurna history and land their newly minted houses stand on. 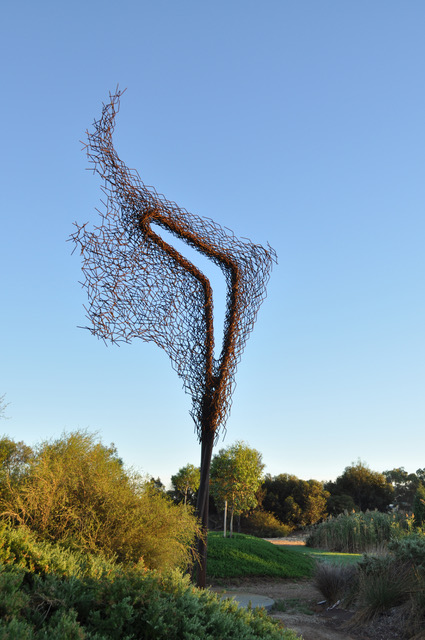 Aleks Danko and Jude Walton’s Lie of the Land on Sir Donald Bradman Drive, West Parklands, echoes Together Woven’s implied message of prior occupancy. Some people are puzzled by these beehive-shaped stone structures. That’s good. Hopefully they are puzzled sufficiently to check out the back story and discover connections between Kaurna culture and European perspectives. This is public sculpture at its very best – sculpturally bold, conceptually inventive and culturally connected. 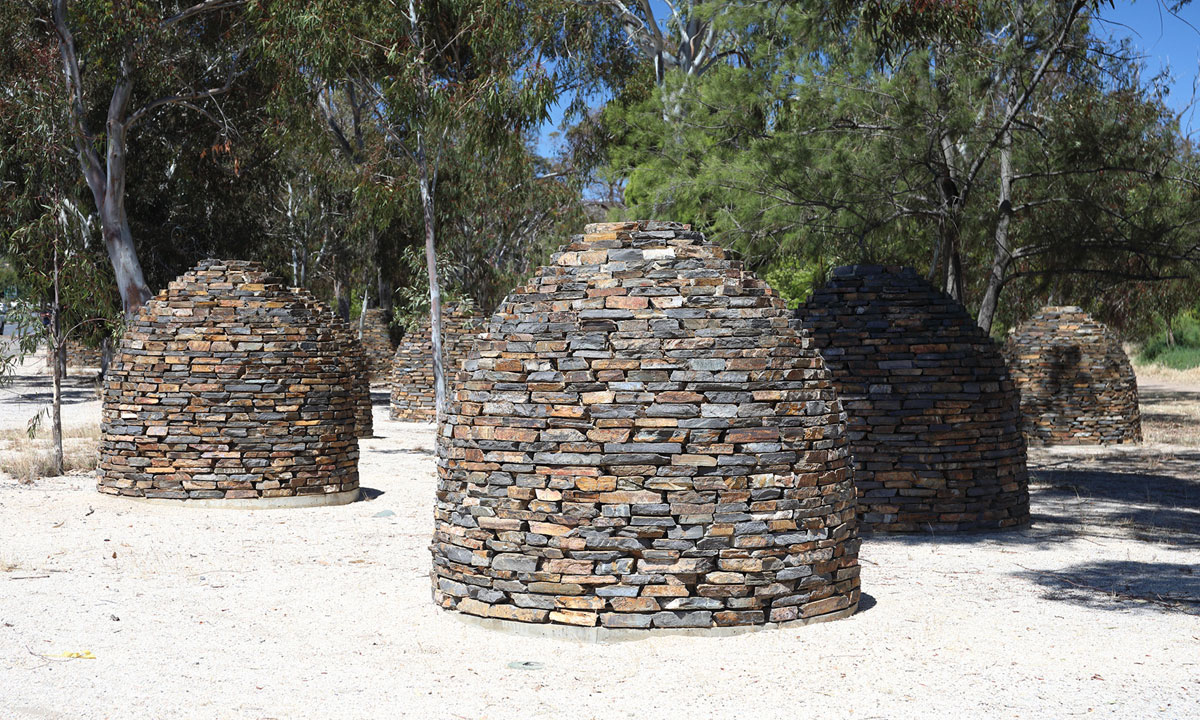 The Lie of the Land, by Aleks Danko and Jude Walton. Photo: Tony Lewis / InDaily

Consider the contemplative power of Bronwyn Oliver’s Eyrie on the back face of the InterContinental Hotel; Greg Johns’ Fugue near Frome Road (endless variation within a closed system), Andy Goldsworthy’s poetic Black Spring at the Botanic Gardens, Bert Flugelman’s Tetrahedra at Adelaide Festival Centre Plaza and Angela and Hossein Valamanesh’s Ginkgo Gates at the Western Entrance to Adelaide Botanic Garden. These emblematic works demonstrate mature and uncompromising talents in full flight, undistracted by a felt need to entertain or compromise. They demonstrate that most of the best, most visually and conceptually compelling public art, comes from hard-won studio practice.

The Big Statement is the Holy Grail of public art. This may be a challenge best met by architects and civic engineers if the city is looking for an equivalent to Melbourne’s International Gateway, known affectionately by locals as the “Ribcage” or “Zipper”. Adelaide has seen a few attempts, “gateway projects” in the main, where big vision has collided with cold reality.

The Public Artworks project, linked to Darlington Interchange, is the latest Adelaide public art work referencing the Tjilbruke Dreaming. It was created by Kaurna/Ngarrindjeri artist Allan Sumner in collaboration with artist Karl Meyer and Exhibition Studios. This two-part installation, the tall figure of Tjilbruke, Puru Yuwanthi (Still Standing), and a smaller Coolamon form, Purruna Martinthi (To Cradle Life), makes a big statement. But separated by the Expressway and feeder roads the relationship between these two units is probably lost on passing motorists. Time will tell if casting Tjirbruke as some kind of super hero striding over a depressing, industrialised landscape (defined by a car park, power poles and strange green boxes) will take viewers on a journey. For now, the integrated storytelling of Warriparinga and the monumental silences of John Dowie’s interpretation at Seacliff will suffice. 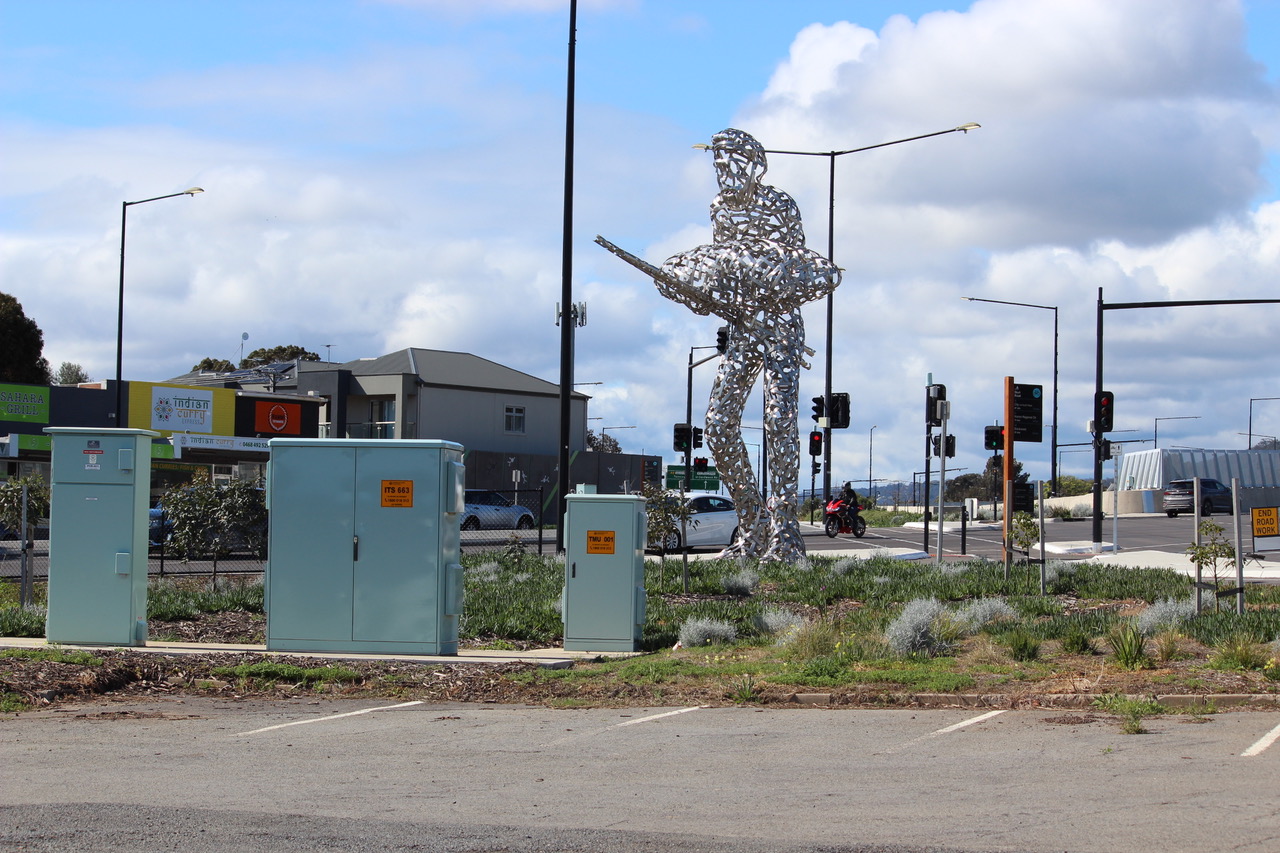 A similar comment can be made about the three-part installation at the Glen Osmond intersection which has to function within a traffic-driven environment. In this setting, the subtle messaging within Tony Bishop’s Fossil Forest (in fierce competition these days with an OTR service station sign) and the very existence of the two bespoke bus shelters nearby, is lost on the diesel-scented air. Another issue is that Fossil, in particular, is degraded by damage, weed encroachment and rubbish. 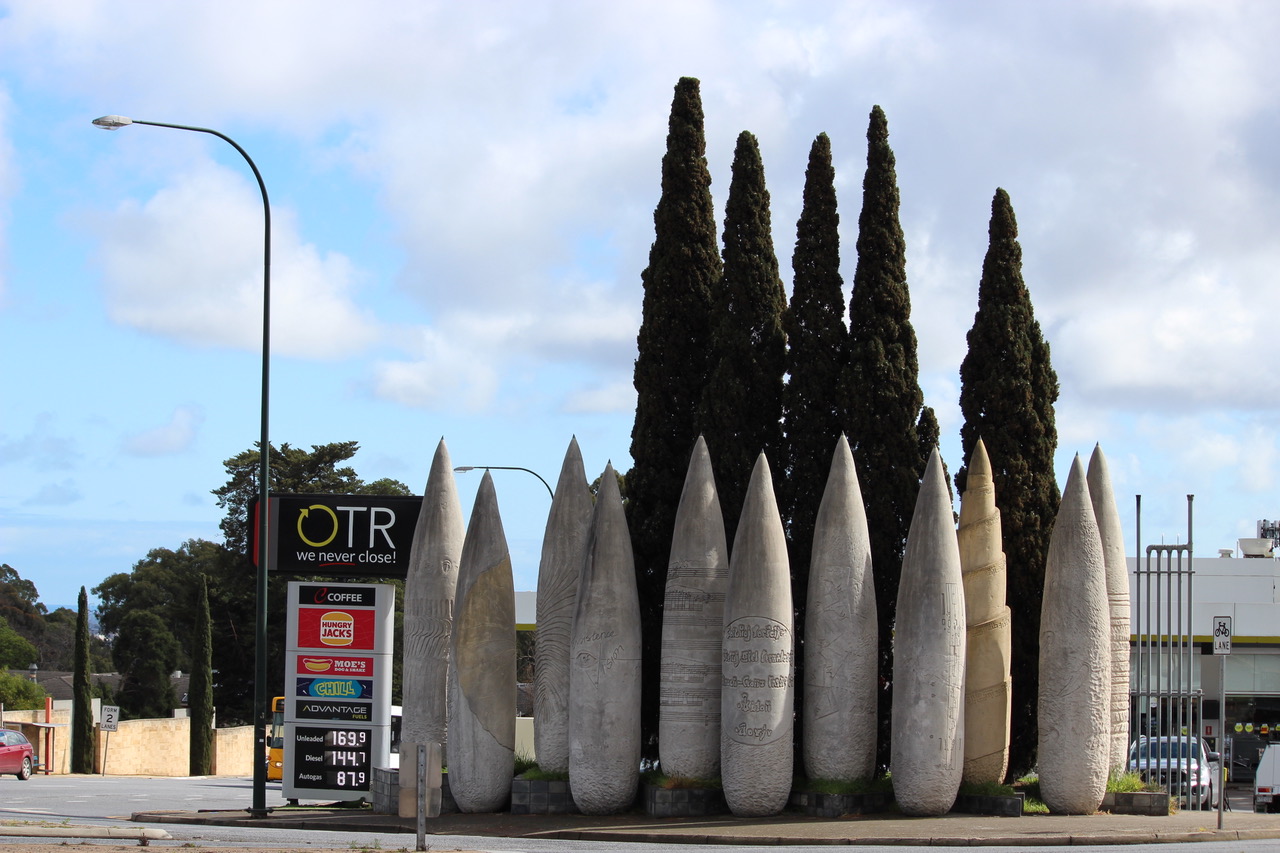 In defiance of set-and-forget budgeting provisions, permanent public art works have the annoying habit of weathering and needing occasional TLC. If left to decay, it would be better they were never born.

Sometimes I think public art works are like little newborns left on various doorsteps, with no-one to really care for them or wanting to adopt them.

This is the second article in a two-part series on public art. Click here to read last week’s story, “Taking it to the streets: public art at the crossroads”.

John Neylon is an experienced art critic and the author of several books on South Australian artists. He is currently writing a history on public art in SA.