It could be Adelaide. William Light’s “grid”, with its cleansing carapace of Parklands, has come to symbolise social enlightenment, and in the view of some social historians and town planners, is a thing of beauty, even a work of art. But if not the Adelaide grid then “Scotty” at Scotty’s Motel at Medindie perhaps. Now there’s a real icon, all five metres of it. With an impeccable prevenance of being the first of the Australian Big Sculptures, launched in 1963, beating the Big Banana at Coffs Harbour by half a nose, it has lots of street cred. But wait. Surely a piece of advertising can’t be considered a work of public art?  Can it? 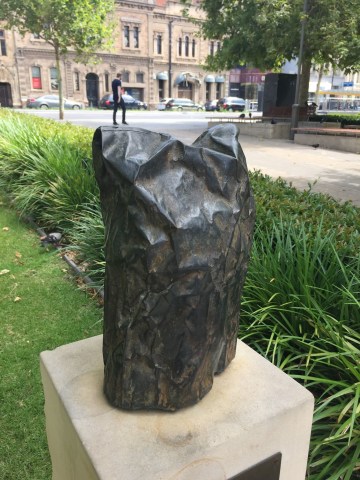 Perhaps Michelle Nikou’s Paper Bag, on North Terrace, near the State Library. There must be other contenders.

So what is public art?

In the words of Leonard Cohen, “everybody knows”.  Here’s the Australian Centre for Contemporary Art’s definition: “A public artwork is an artwork in any medium, planned and executed outside a gallery context and intended specifically for exhibition within public space.” There are hundreds of similar definitions a mouse click away. They say everything and nothing.

“Public art”, “art in public places”, “art for public places”, “public sculpture”, “site-specific art” – do all these names mean the same thing? No, or rather it depends on who is using them. Purists may prefer “art / sculpture in public places” because they privilege the quality of the art work ahead of all other considerations. “Public art” tends to be favoured by government and sponsor agencies because it covers all bases. But be aware. It may be referring to pavement chalk drawings.

What does it do?

How long have you got? Some claims are very extravagant – like curing warts or bringing about a North/South Korean unification. All Adelaide councils make claims. The City of Marion Community Vision 2040 states that “public art works can help to create a more attractive urban environment which reflects local character, community pride, ownership, sense of place and community identity”. Adelaide City Council pumps the economic benefits. What’s there not to like about that?

Here’s Michael Leunig on this question:

Perhaps Leunig was talking about the train wrecks – every city has them – when community expectations and tastes aren’t in the same postcodes as artists’ visions. Adelaide has had its fair share of public art debates. The Hajek Plaza, for example, became a lightning rod for complaint. Don Dunstan saw it as a gesture of cultural self-confidence, Adelaide shaking off its provincial fustiness. Placard-waving protestors at its launch in 1977 were heard shouting: “When don’t we want it”. Adelaideans can be divided into those who love and those who despise the pigs in Rundle Mall. 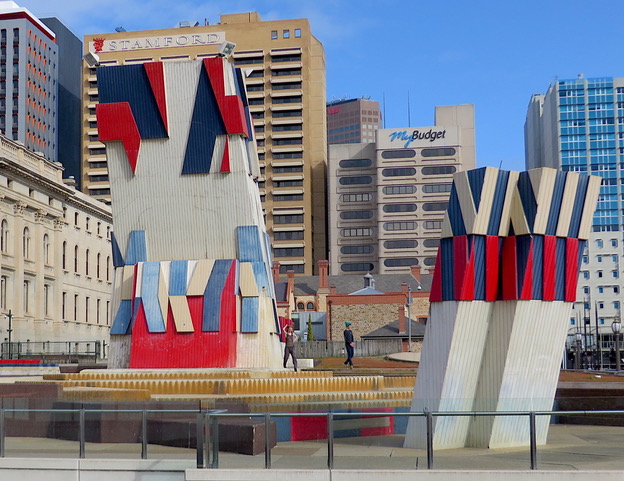 Does the public have a say?

Until recently, not really. But when the federal and state governments in the later 20th century began funding and developing policies about community arts, terms like “engagement” and “consultation” began to wag the dog. Today, all public art commission briefs require applicants to demonstrate that they have consulted, sometimes until the pips squeak. Is this a problem? Not for selection panels with their biros paused over the appropriate tick boxes, but for artists of vision the idea of “colouring in” a concept according to pre-set templates is a bitter pill to swallow.

How easy is it?

I’ve lost count of the number of times artists have confided that maintaining a public art practice is hard and getting harder. The compliance processes of major projects can assume Byzantine complexity. Like, “Have you considered stranger-danger concealment factors?”, “Will anyone be offended?”, “Can your wind-shear calculations be verified?”.

The problem is that public art can be a real bitch. Projects of their nature call for in-depth technical know-how, project management expertise, and not the least, skills in envisaging how ideas will actually work when the safety fences are packed away. Then there is the financial pressure of keeping subcontractors on hold while selection is finalised. It’s not a pathway for the faint-hearted. 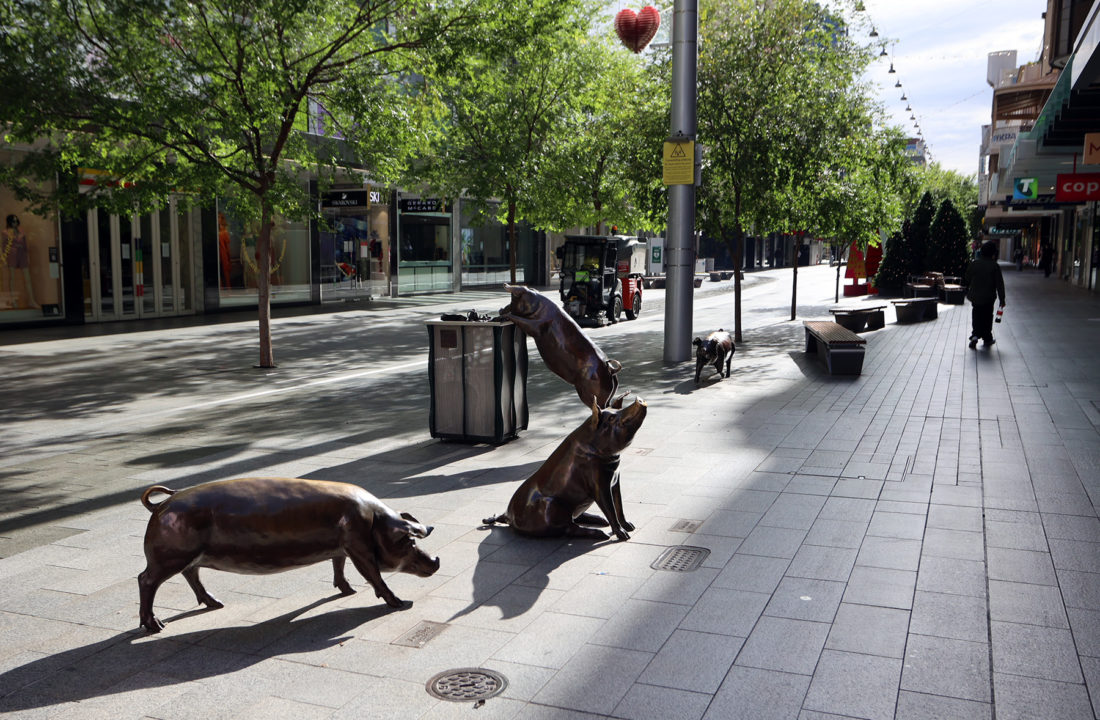 Marguerite Derricourt, A Day Out: Pigs in Rundle Mall, 1999, bronze.

What happens when the best idea (yours) doesn’t get selected?

Adopt the foetal position. Entertain dark twisted thoughts about certain artists or panel members. Drink with fellow rejects. Vow to give it all away.

I have the highest regard for a number of artists who pick themselves up off the canvas and keep going. But the reality is that the tide is turning against the individual, under-resourced artist. Public art at the pointy end has become big business. The era of the designer/fabrication company with its visualisers, engineers and contract specialists is upon us. Just add a genuinely creative idea. Now where might that come from? Likely the really interesting artists with big vision who may be thinking of giving it all away. Now there’s a problem.

Does the word ‘good’ belong in the same sentence as ‘Adelaide public art’?

The devil is in the detail. Meet you at the crossroads.

John Neylon is an experienced art critic and the author of several books on South Australian artists. He is currently writing a history on public art in SA. Next week in InReview, he will look at “the devil in the detail” of what constitutes good ­– and not-so-good – public art in Adelaide.