“If I’m putting works out to exhibit,” says artist Roy Ananda, “there’s an implicit intention to communicate with other human beings.”

Ananda skips swiftly forward in the conversation and his friendly tone suggests that the idea of art as communication is self-evident. But his works strike a particularly open note that is not always present in contemporary galleries.

After more than 20 years of practice, Ananda has mastered a fine balance between depth and relatability in his art. While his work still draws on an early interest in process-driven, formalist sculpture, he has lately found himself increasingly engaged by overt explorations of his pop culture obsessions.

“Maybe once upon a time I would have thought, perhaps that’s not a valid thing to make serious contemporary art about,” he says.

“I would have thought, ‘My obsession with Road Runner cartoons, there’s not room for that’. But then when you get more confident in your own practice, you think – wait a minute, that’s as much about the physicality of materials as a Henry Moore carving is.

“It’s using a pulpy medium, but it can still have interesting things to say about human nature.”

The diversity and reach of Ananda’s practice is being celebrated at this year’s South Australian Living Artists (SALA) festival, for which he has been named Feature Artist. The title comes with a major exhibition – Supreme Library at the Adelaide Central Gallery; a monograph publication focussed on Ananda’s art; and a concurrent exhibition at the Art Gallery of South Australia (AGSA).

Entitled Roy Ananda: Further Annotations, the AGSA show continues the artist’s series in which he attributes different elements of an image to fictional origins. In this iteration, Ananda takes two of the gallery’s collection artworks as his starting point.

“One is for a Peter Booth painting called Painting 1982… it’s this Hellscape of people eating each other, so I’ve annotated it with some of my favourite cannibals from horror films and bits of viscera on the ground have been attributed to different death metal album covers.

“The other one is Olafur Eliasson’s Dark Matter Collective installation, which is a beautiful work – a low relief wall sculpture with these 200-odd glass spheres. I have attributed them to different fictional orbs – crystal balls we might see in Harry Potter, or aliens that manifest as orbs in different science-fiction franchises.” 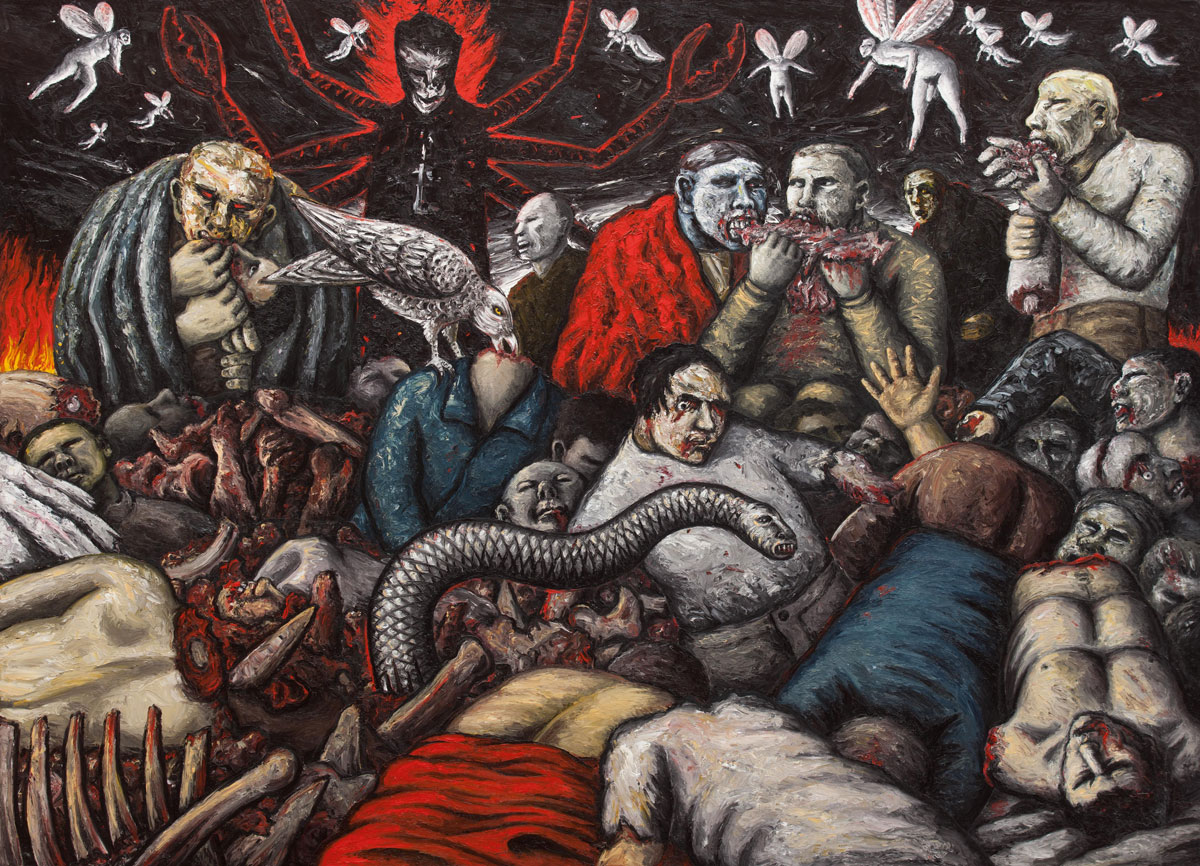 Peter Booth’s Painting 1982 (one of the works Ananda responds to in Further Annotations); Melbourne, oil on canvas, AM Ragless Bequest Fund, AGSA. Courtesy the artist.

These annotations are as significant in their minutiae as in their high concept – highlighting overlapping details only mega-fans might notice, while also unveiling how storytelling, no matter its genre, draws on fundamental archetypes.

In Supreme Library, Ananda brings a fresh lens to the overlaps between fictional worlds. For the hugely ambitious exhibition, he has attempted to catalogue his 4300-plus collection of pop culture materials and make a work that creatively depicts the tangled relationships between this mountain of eclectic ephemera.

“I felt like I really wanted the exhibition to be generated from similar processes to those generating the monograph publication,” says Ananda. “So, that sense of surveying a collection of stuff – in the case of the book it’s almost 20 years of my art practice, in the case of this show it was turning that lens on my collection of pop culture artefacts.

“That’s a really interesting big body of data that I have a big personal stake in, but it’s sort of unwieldy, so how do I corral that into something organised? Dewey has his decimal system, what’s my system? The Ananda Axiometric System or something like that?”

The result is huge swathes of paper that fill the walls of the gallery. Ananda has created an isometric, diagram-driven and colour-coded system that houses representations of select items from his collection. Here, photocopies of a Seinfeld DVD cover and Neil Gaiman book artwork are depicted in conversation with each other. 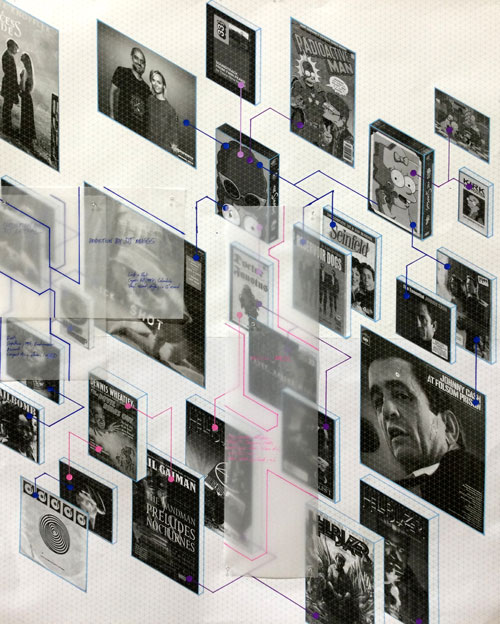 Cataloguing and creating this system has taken months, many of which Ananda spent entering data. The lengthy process, he says, was joyful – “almost like time travel” that allowed him to revisit formative moments. He hopes the exhibition will also prompt audiences to explore the breadth of their obsessions in new ways.

“There’s that lovely Roald Dahl quote about the most important thing in life is to be an enthusiast and it doesn’t matter what it’s of, within reason,” Ananda says.

“I’d like to think people will look at it and think how they might apply the same kind of logic to something they’re enthusiastic about. Maybe they think… If I could make my dream team of AFL players, who would be on it? I’m hopeful it might spark some creative remixing of people’s own interests.” 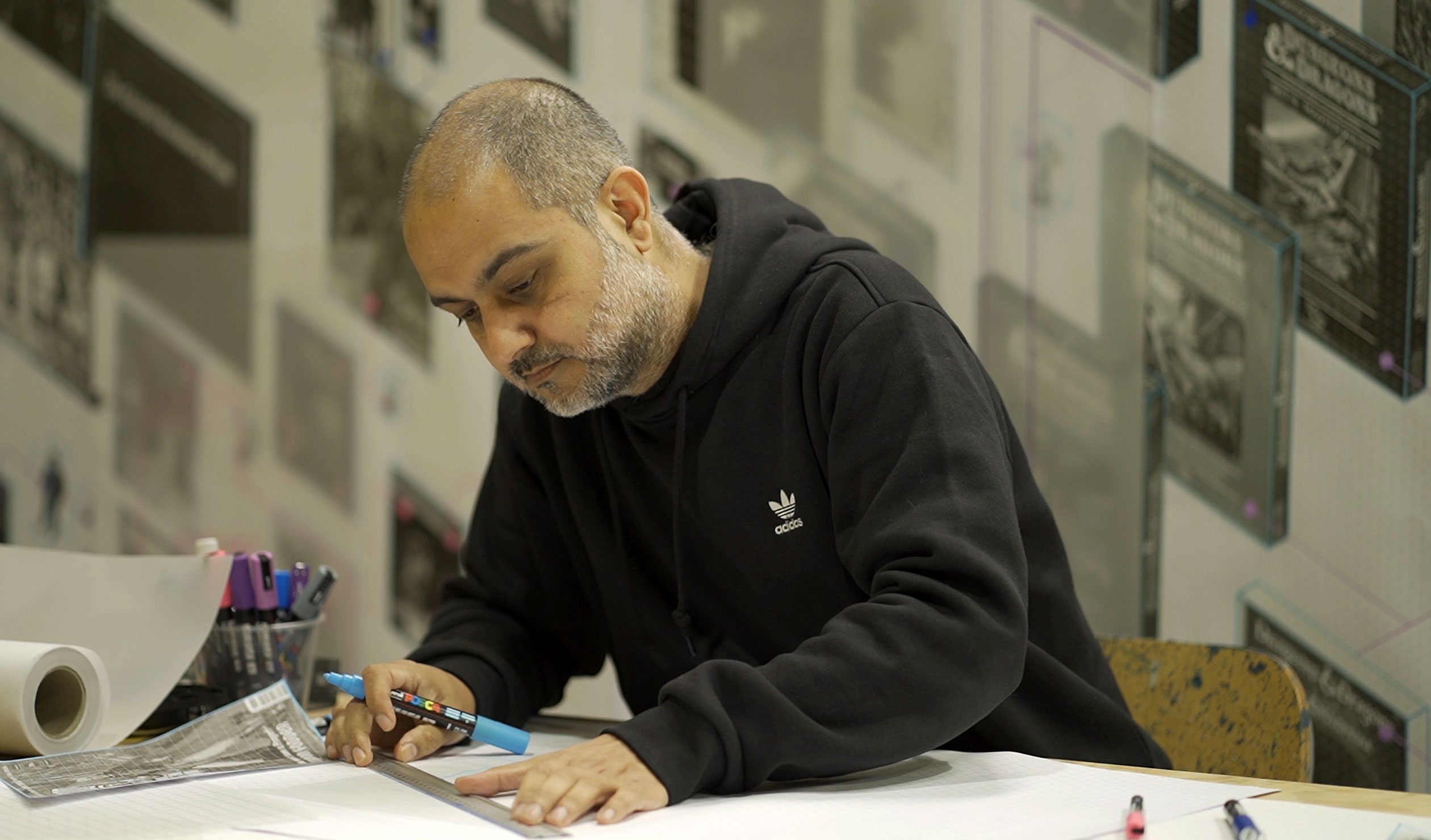 Roy Ananda at work on Supreme Library in his studio. Photo: Sam Roberts

This desire for remixing and reinterpretation is also evident in the monograph, where it has led to a series of creative collaborations. Alongside descriptive essays about Ananda’s practice and a wealth of images showing works spanning his entire career, there are playful and experimental fragments of fiction by celebrated author Sean Williams and footnotes that turn, before the reader’s eyes, into a comments-section-type conversation between all the authors.

True to the festival’s name, the SALA monograph is intended to showcase an artist in full flight, rather than act as a retrospective. Appropriately, the energy of Ananda’s career, driven by his incurable enthusiasm, leaps boldly from the pages. 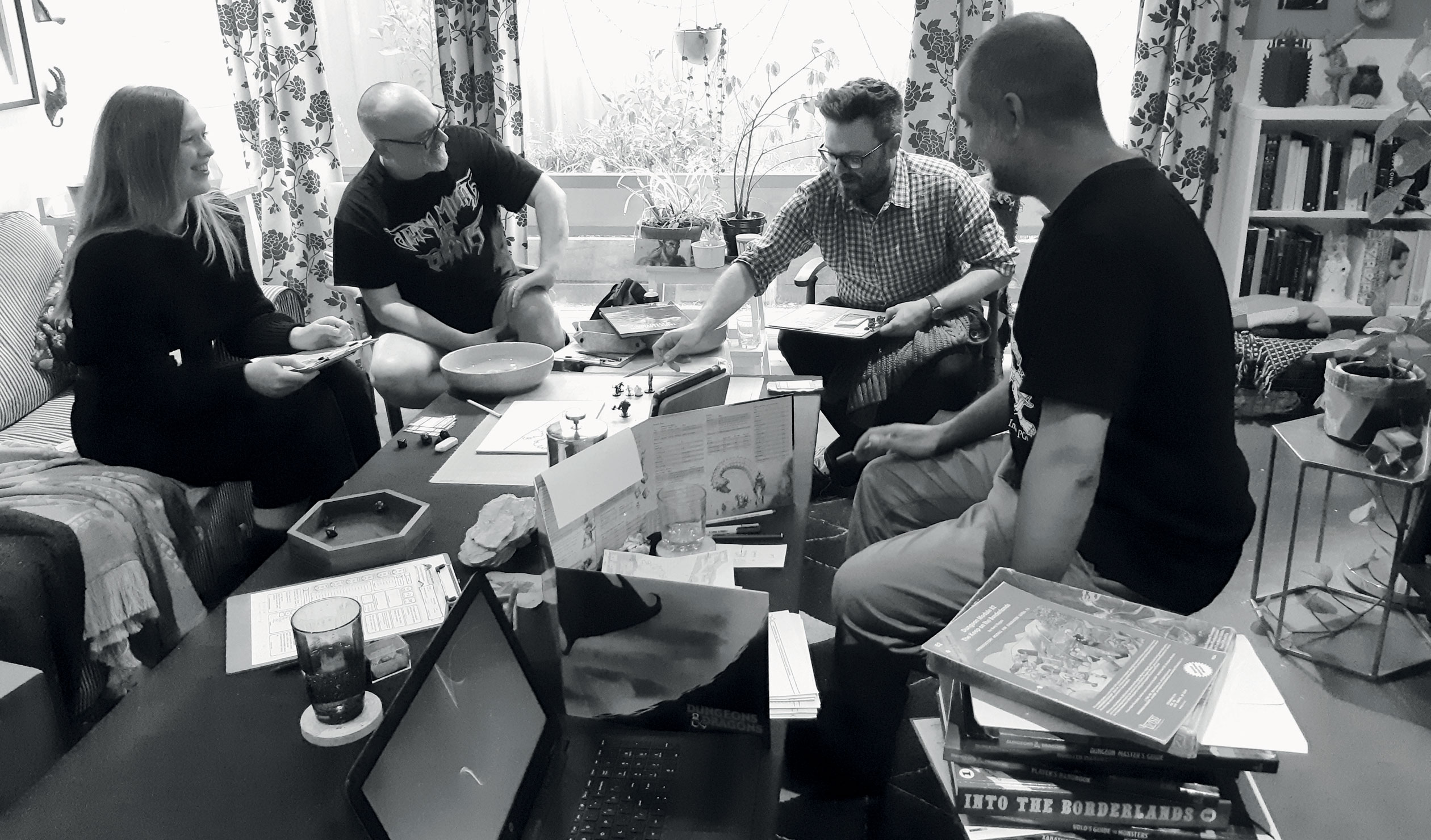 Note: While the official SALA opening event and some exhibition launches have been affected by COVID-19 restrictions, the vast majority of exhibitions will go ahead, with attendees required to wear face masks and follow social distancing requirements.