Created by Melbourne-based Grande Experiences, Van Gogh Alive has already thrilled audiences in more than 70 cities since its inception in 2011, including Sydney last year. It is currently also showing in London, Birmingham and Mexico City. Van Gogh, the iconic Dutch post-Impressionist painter whose work went unrecognised during his lifetime, would have been astounded as his posthumous global reach.

Adelaide does get to enjoy a first, though: the brand-new, transportable Grand Pavilion, which has been set up on the old Le Cornu site in North Adelaide.

The producers claim the vast, transportable structure is the biggest in the world, purpose-built in Germany under the supervision of Adelaide-based company SpanIT. It took six weeks to set up on the site, with finishing touches still being put in place early on last week’s opening day, which had already been set back by a week after a ship famously blocked the Suez Canal in March, causing serious delays. But open it did, families eagerly queuing up for some escapist entertainment at the start of the school holidays.

The Grand Pavilion houses a main digital gallery with two adjoining spaces designed as immersive experiences of the iconic paintings Sunflowers and Starry Night, which are sure to launch a thousand selfies.

In the vestibule there’s also a “Van Gogh’s Café at Arles at Night” where you can sip a glass of champagne from event partner Taittinger, a shop with merchandise and an “Instagrammable Van Gogh’s bedroom” – a life-size, 3D relief of Vincent’s famous painting of his bedroom in Arles. 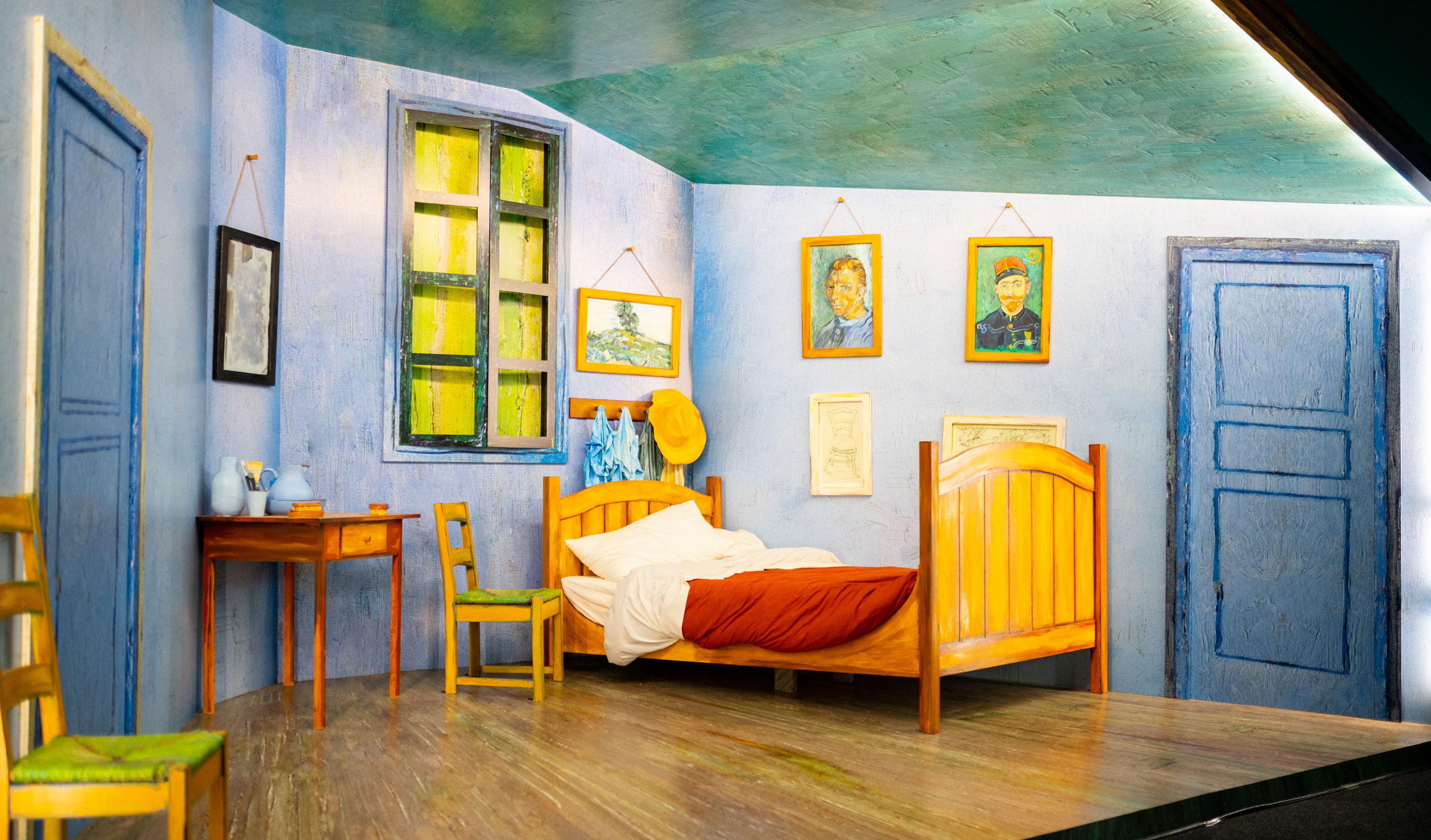 Behind the luxury Lexus with a Van Gogh artwork wrap on display at the entrance – Lexus being the main sponsor – are a few panels with basic summaries of the different periods of van Gogh’s life as an artist, which lasted 10 short years before he died of suicide at the age of 37, depressed, ill and impoverished, having failed, he thought, as an artist.

Van Gogh’s ethereal Almond Blossom is projected in repeated patterns onto the ceiling of the vestibule, with its white blossoms on silvery branches set against a blue sky. It was painted in 1890 as a gift to his new nephew, also named Vincent, born to his supportive brother Theo and sister-in-law Jo. The work reflects the artist’s love of Japanese woodblock prints, with its bold outlines and unusual framing of a fragment of the tree. It also reflects his obsession with colour, the sky made up of daubs of complex shades of blue, faintly visible in the digital projection.

Almond Blossom evokes hope, spring and renewal, but its optimism and beauty is made more poignant knowing it was painted while van Gogh was in the asylum at Saint Remy after suffering a psychotic episode. He took his life six months later.

The projection is beautiful and immersive and gives a bright, fresh feeling within the vestibule, but without any context Almond Blossom effectively becomes wallpaper, a beautiful bit of décor that provides a backdrop to the Taittinger bar and the Lexus on display.

However, Van Gogh Alive doesn’t claim to be an exhibition – it’s an “experience”. As a result it is inevitably very different to the more contemplative experience of standing before the original in the Van Gogh Museum in Amsterdam, taking time to absorb the impact of the work, looking at real daubs of paint that bear witness to the motion of his paint brush. “It is looking at things for a long time that ripens you and gives you a deeper meaning,” wrote van Gogh in one of his letters. But Adelaide audiences aren’t going to be heading to Amsterdam any time soon, or to any of the major galleries around the world that house his works.

It would be remiss, too, to dismiss the importance of sponsorship – patronage has kept artists in work since long before the Renaissance, and in modern times, corporate partners have enabled audiences around the world to enjoy a multitude of artistic experiences. But corporate sponsorships are about brand, and so Vincent van Gogh and his work, which is now in the public domain, have become a brand, too, and the Lexus commercial that ends the digital experience inside the gallery moments after Vincent’s life has come to an end is somewhat jarring. 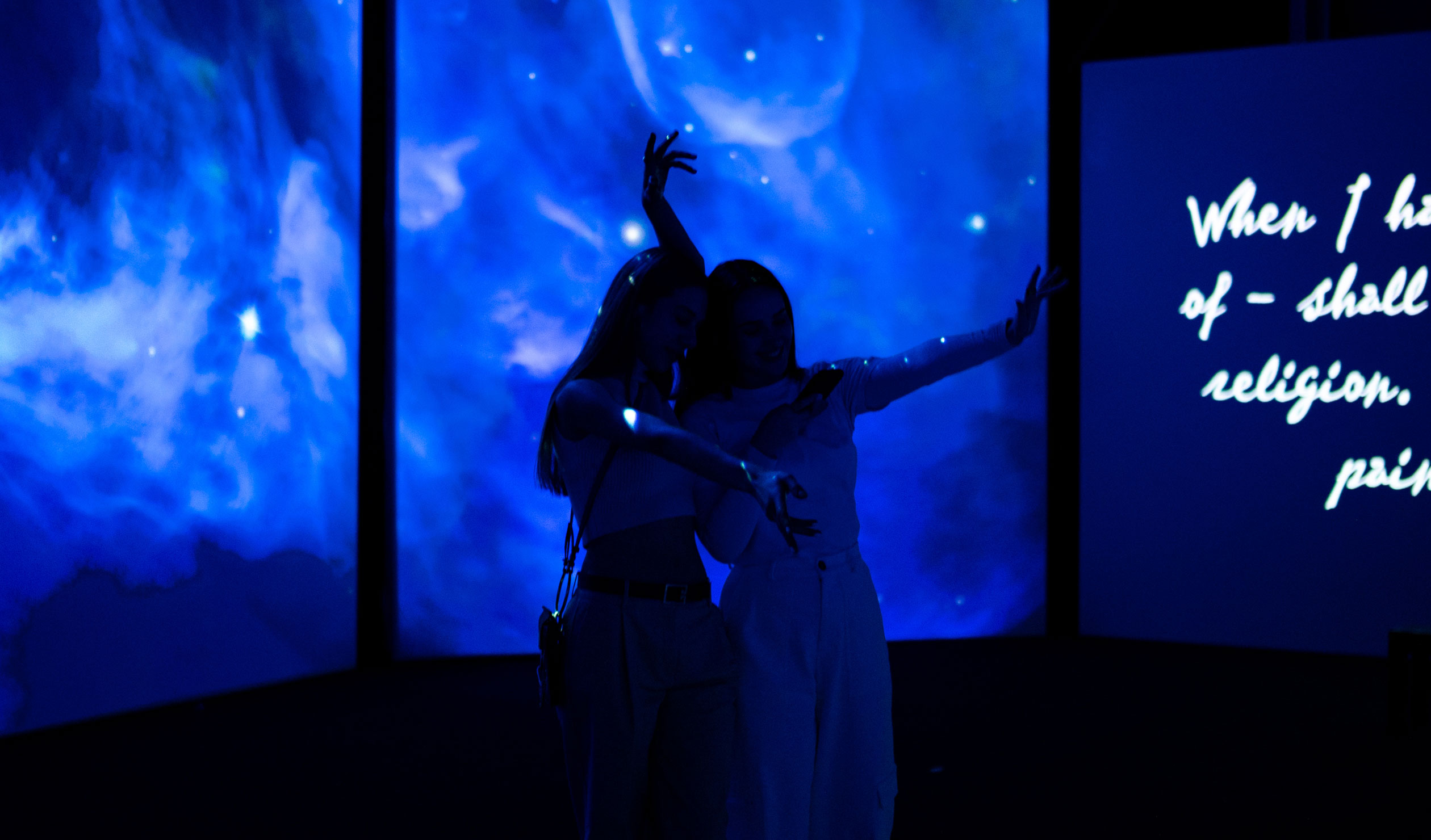 The main event is a vibrant, immersive, 42-minute loop of visuals and sound projected using Grande Experiences’ trademarked Sensory4 technology. There are vast screens on the walls and floor, all showing different images, mostly of van Gogh’s work but interspersed with vintage photographs, stock imagery and comparative artworks that provide some visual context to the chronological display of his artistic life. Some of the images are whole, while others are fragmented and magnified to highlight the vigour of van Gogh’s brushstrokes. Elements within some of the paintings are brought to life with computer animation; a train rolling through a landscape, or crows taking flight from a wheat field.

There’s plenty of social-distancing-friendly space; a few benches are provided for seated contemplation, but people are free to wander among the screens, or even to lie on the floor. Kids will love walking on the screens on the floor, finding themselves lit up by the projections. Given the sheer number of works featured and the speed with which they chop and change, visitors may need to stay for two loops to be able to take it all in. While tickets are booked in half-hour slots, you’re are free to remain in the space for as long as you like. 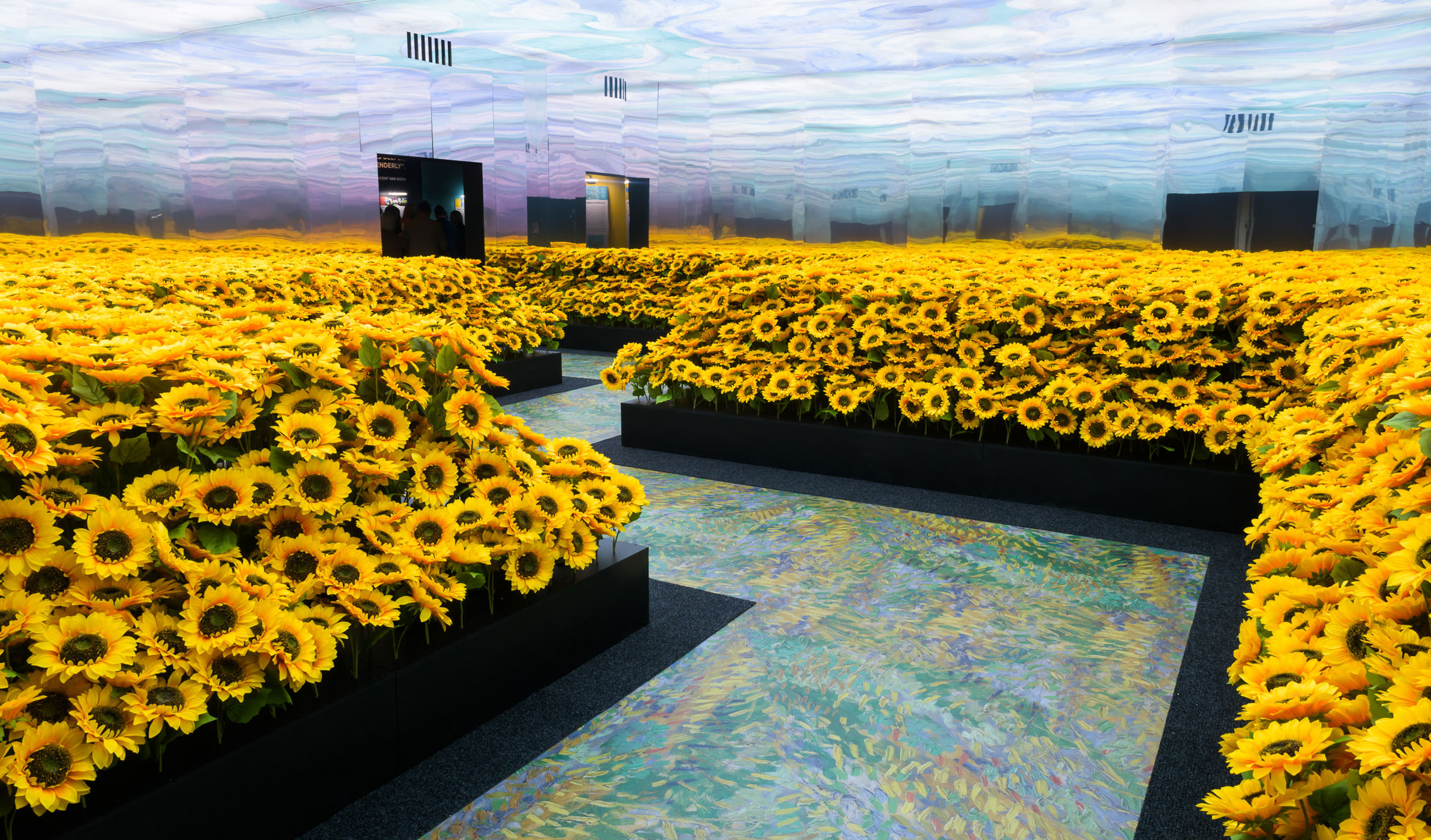 There are thousands of images in the loop, too many to furnish with detailed information. Van Gogh’s most iconic works are listed in the official program and on the summary panels in the vestibule, but not even the panel on Sunflowers states where the original is housed.

Distancing itself from the ivory tower environment of an art gallery, Van Gogh Alive places more importance on making this an inclusive experience for all, but knowing where the originals can be found might be useful. Purists might bristle at the paucity of information, but if Van Gogh Alive prompts someone to visit an art gallery for the first time, or to delve more deeply into the details of van Gogh’s work – and if it brings much-needed joy and colour to Adelaide audiences in these troubled times – then that can only be a good thing.

Van Gogh Alive is presented as part of Illuminate Adelaide at the Grand Pavilion on O’Connell Street until August 1. 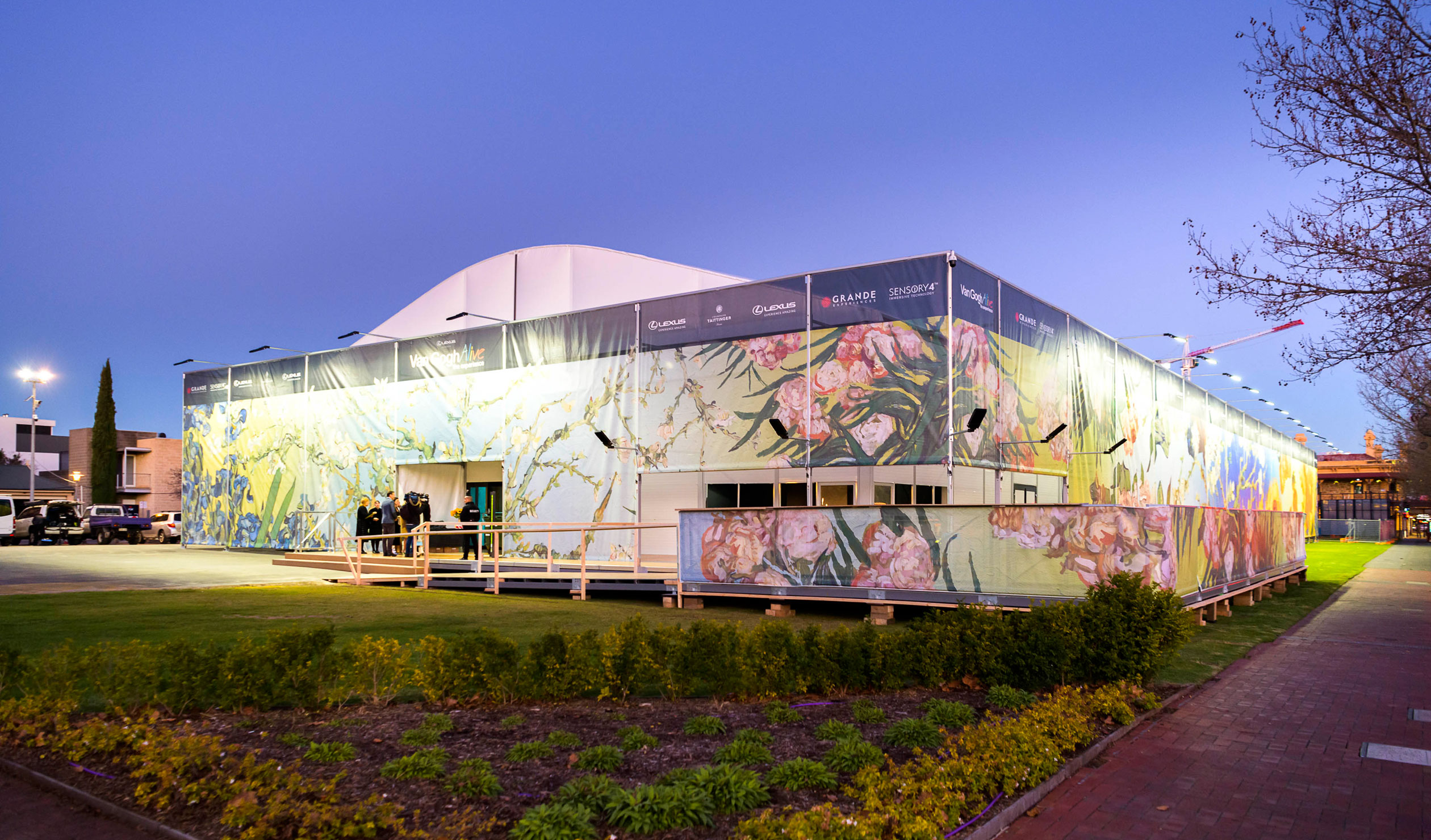 Van Gogh Alive is on the old Le Cornu site in North Adelaide.

'Not privatisation': Ticketek to take over BASS box office