In the 1970s a most curious painting appeared on the Art Gallery of South Australia’s walls. It was titled Perpetuum Mobile or Equator, depending on how you looked at it. One was on the reverse side of the other.

Dusan Marek, aged 22, painted it while voyaging to Australia in 1948 as a refugee fleeing Communist rule in his homeland Czechoslovakia. Bound for South Australia with a cargo of fears and dreams, the good ship the Charlton Sovereign slipped over the equator on October 12. Dusan marked the occasion with Perpetuum Mobile / Equator, painted on a salvaged wooden table top.

The journey had its ups and downs courtesy of the occasional storm at sea. Dusan, and his brother Voitre, landed in Adelaide safe enough in the “paradise of the kangaroos”, as he called it. But Perpetuum faced another storm. This work was rejected from display in the 1949 Annual Exhibition of Contemporary Art in Adelaide. The term “obscene” was levelled at it. 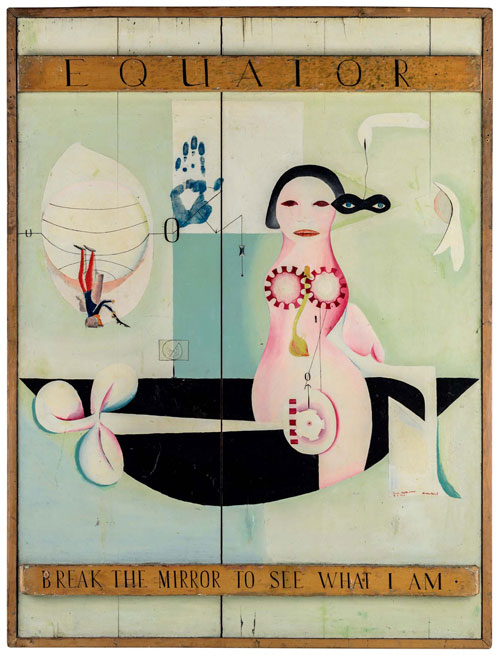 Unhelpful critique followed the Marek brothers when they mounted their first exhibitions in Adelaide and later in Sydney. They became known as the “Czech migrant brothers” and producers of “weird art”. All credit to Dusan for addressing such ignorance and conservatism front on. The Ern Malley furore that divided the local Adelaide community in the 1940s appeared to hold few lessons in how to deal with full-frontal surrealism, particularly one laced with nudity, sex and incongruity.  Dusan took out advertising space in an Adelaide newspaper to declare: “Art cannot speak through nice social norms / It must not fear to speak plainly / Man is not privacy / Break the mirror, which changes your sides / Empty yourself to see what you are.”

That was then. We are so cool now in matters of new art. Totally shock-proof. And yet the kind of art that the Marek brothers and fellow European surrealists pioneered in the 20th-century inter-war era retains hermetic, mysterious qualities.

The Art Gallery of South Australia’s Surrealists at sea exhibition, and insights contained within diaries and family records, incorporate heartfelt and accessible human stories. But the imagery, while visually intriguing, can be intellectually challenging. Dusan deeply admired the work and ideas of the Belgian surrealist René Magritte, who said that, “People who look for symbolic meanings fail to grasp the internal poetry and mystery of the image”. With that in mind, how is it possible to engage with an exhibition which exemplifies an intuitive approach to creating images which speak for inner states of mind? 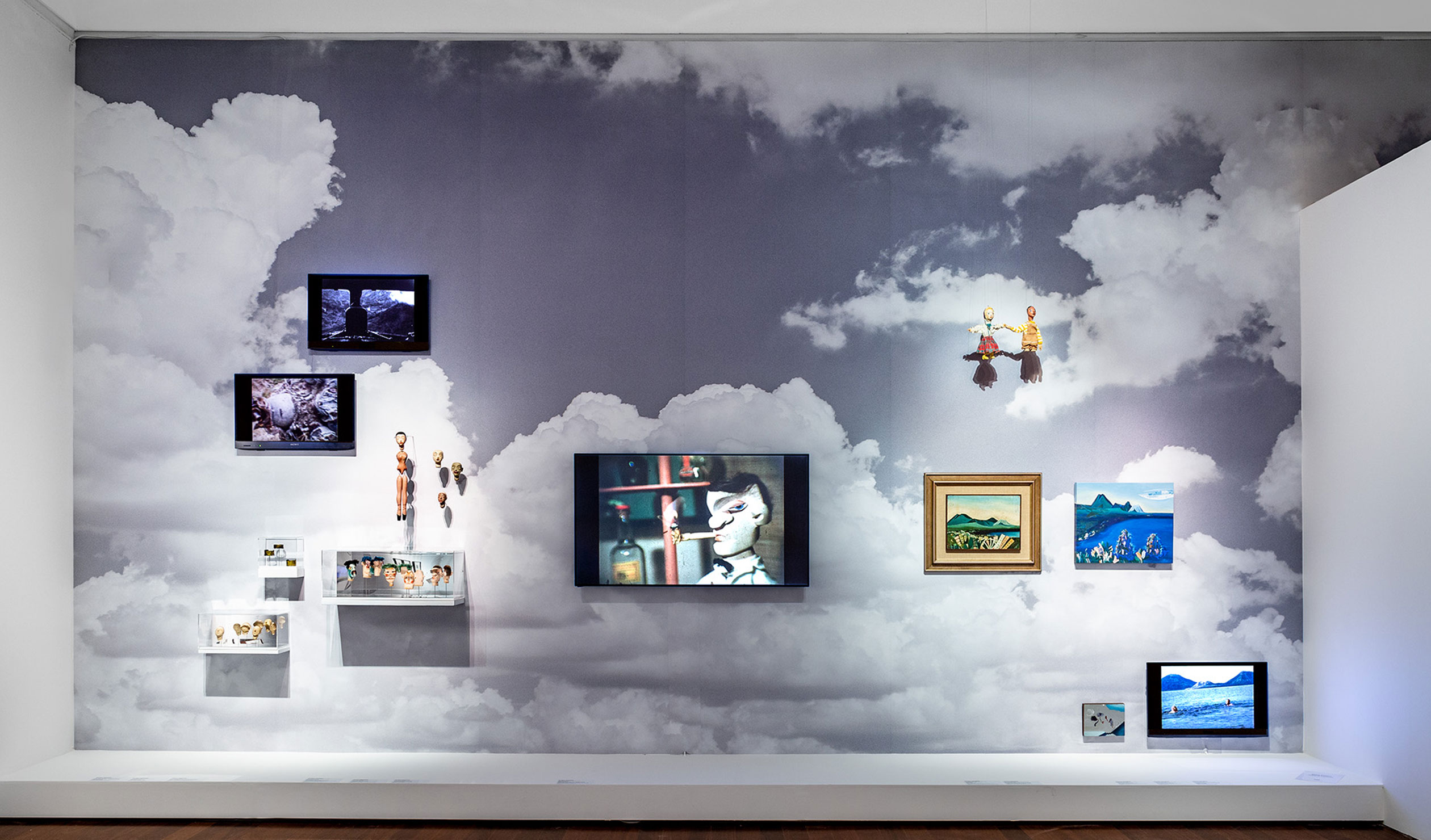 The 1993 NGA exhibition Surrealism: Revolution by Night made a significant contribution to an understanding of where Australian surrealism sat within modern European art. Dusan Marek was represented but there was little space in the project’s publication to articulate the artist’s Prague-inflected method of inventing anamorphic forms to express fluid identity and states of interconnectedness. This kind of imagery was always going to be harder to engage with, and pigeon-hole, than say an Albert Tucker Waste Land – inspired landscape with artfully arranged skull.

Surrealists at sea curator Elle Freak, who is also editor of the comprehensive publication accompanying the exhibition, has wisely chosen to give these largely self-obsessed works room to speak on their own terms.

The chronological hang traces the artists’ establishment of their respective practices. The fact that both artists worked across a diversity of media – including painting, drawing, printmaking, photography, sculpture, animation and film – continually refreshes viewing of this large exhibition of more than 200 works drawn from private and public collections.

There is a “cinema” of Dusan’s nationally and internationally acclaimed avant-garde films and animations which close the circle in referencing childhood puppet plays and folk stories. They have an oddly contemporary feel to them – partly because of their mashup style of delivery.

The drawings are the star performers. Voitre and Dusan are essentially graphic artists who worked instinctively with lines which simply took (to misquote Paul Klee) their ideas for a walk. They look so deliciously out of step with the gigantism and spectacularism of much contemporary art they deserve a warm conceptual hug. 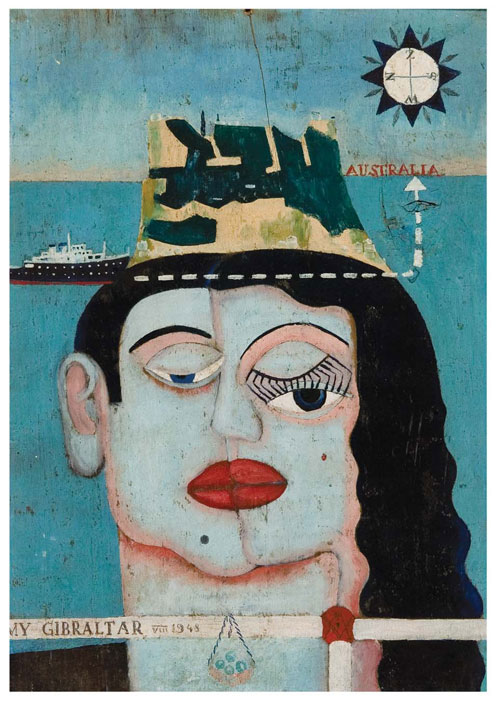 The Surrealists at sea publication accompanying the exhibition incorporates essays by multiple contributors who collectively provide background stories, not only on the two artists and their creative journeys but also the cultural and historical contexts which shaped their destinies. If you were captivated by Richard Fidler’s The Golden Maze then I recommend you start with Cheri Donaldson’s essay, “Prague: The magical capital”. In this exhibition, all roads lead to and from Prague, with Adelaide somewhat incongruously caught in the loop. Along the way you will encounter the extraordinary saga of Czech poetism, hidden from view to many who grew up believing that Paris was the centre of the surrealist world.

Dusan and Voitre Marek deserved better from their new homeland. They came bearing gifts, the most important being how to give positive expression to the inner life, no matter what the circumstances. It’s not too late to join them in a celebratory dip – somewhere between reality and dreams.

Dušan and Voitre Marek: Surrealists at sea is showing at the Art Gallery of South Australia until September 12.