Di and Viv and Rose is about just that: Di and Viv and Rose. Amelia Bullmore’s play follows three vastly different women who meet at university in the 1980s. While the play is set 40 years ago, its themes of friendship, gender, sexuality, trauma, parenthood and ambition profoundly speak to today’s audiences – perhaps a marker of how little progress has been made, but also testament to the timelessness of Bullmore’s writing.

Di (Julia Vosnakis) is a sport-loving lesbian studying business; Viv (Georgia Laity) is an intelligent sociology student with a hardened exterior, and Rose (Isabel Vanhakartano) is a kind and free-spirited art-history major. Considered writing and nuanced, thoughtful performances bring these characters to life, with complexity and contradictions preventing them from becoming female caricatures.

What truly makes this play is the chemistry between the actors. The show is presented by The Corseted Rabbits, a female-led collective focusing on showcasing female-led projects. While this is their first production as a collective, their ability to collaborate on stage, as well as off, is evident.

The performance opens with a series of fast-paced, platonic “meet-cutes”, one of the many charming choices from director Rachel Burke. After this introduction, the actors’ names are projected onto the walls of the set, along with the years and locations of each scene, stylistically resembling the opening credits of an ’80s film.

The show runs for just over two hours, with a 20-minute interval used to distinguish between two sections of the plot. The 70-minute first act is dedicated to the three women making memories and forming identities under the same roof, while the second act, a shorter 50-minute sitting, is for the rest of adulthood. The fast-paced, engaging performance means the time flies by. 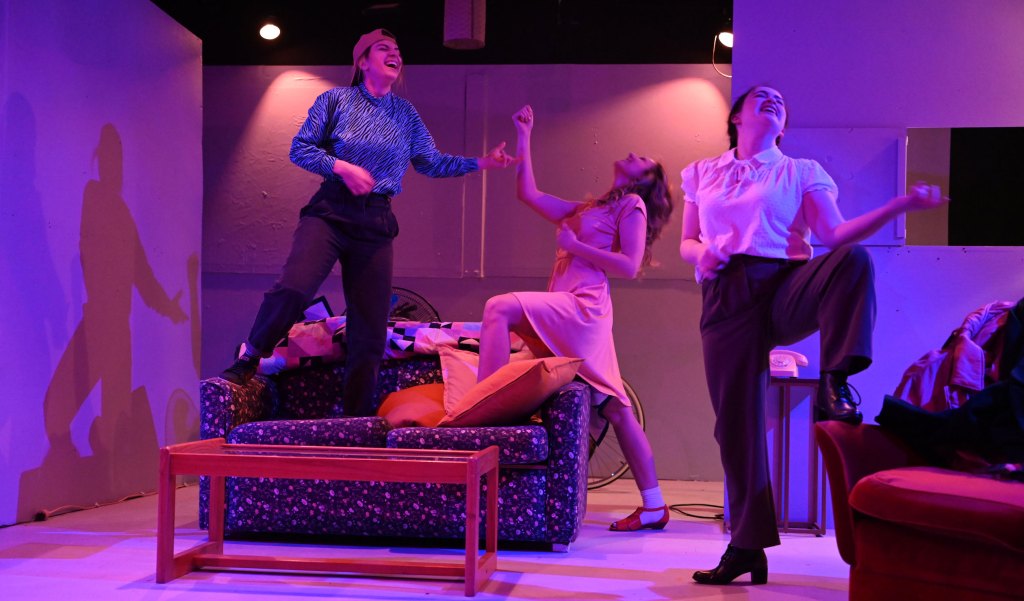 Music is crucial in bringing the era to life. The soundtrack includes Belinda Carlisle’s “Heaven is a Place on Earth”, Madonna’s “Like a Virgin” and Bonnie Tyler’s “Total Eclipse of the Heart” – just three of many ’80s hits that still make it into the playlist of current-day 20-somethings eager for a night of dancing.

The main set, designed by Meg Wilson, replicates a share house: a couch is at the heart of the room, a boombox sits on the shelf, and bikes lean against the walls. The set evolves as the women do – an added armchair, extra blankets, a fan – and their early adulthood is lived out in this living room.

In the most endearing scene, the characters lose themselves dancing around the set to Prince’s “Let’s Go Crazy”. The most moving scene is when a den of sheets is made around the couch in a time of need, as a safe, communal grieving place.

Di and Viv and Rose celebrates platonic love in a way that grants it as much validity as any romance. It asks us to protect the friendships that remind us of who we are, and is a stunning portrayal of the intricacy of female identities.

Di and Viv and Rose is at Rumpus until July 24.