On a seemingly minimal stage, in front of a decadent gold curtain, two performers begin the negotiation that – in one form or another – will become the common thread tying YES together.

“Are you okay?” one asks, as the other suffocates. The person struggling to breathe fills their lungs with just enough air to deliver a reassuring, self-effacing, “Yes”. As the show unfolds, this loaded question and answer combination becomes the signal that a new question cycle is beginning.

From this launching pad the two performers (Dana Miltins and Mary Helen Sassman) traverse a range of scenarios in which one party is always somehow obligated to answer “yes” to a barrage of questions.

Some scenes are surreal, abstracted out of their usual trappings to reveal their untenably dark underbelly. Interactions between a doctor and a patient, a real estate agent and a rental tenant, and a journalist and their subject submerge the audience in the murky undercurrents of coercion that exist in everyday, power-imbalanced relationships.

Other cycles are baldly comedic and genuinely (as opposed to internet-standard) laugh-out-loud funny. A neighbourly visit and an appointment with a wellness guru (“Sadness is the syphilis of feelings,” they say, sagely) offer light relief, while still keeping the spectre of consent and shifting versions of truth in sight.

This is genuinely experimental theatre, with the audience given neither narrative nor traditional characters arcs to follow. But the piece, which was developed over several years through a collaboration between The Rabble’s Emma Valente and Kate Davis and the performers, has been deftly constructed. 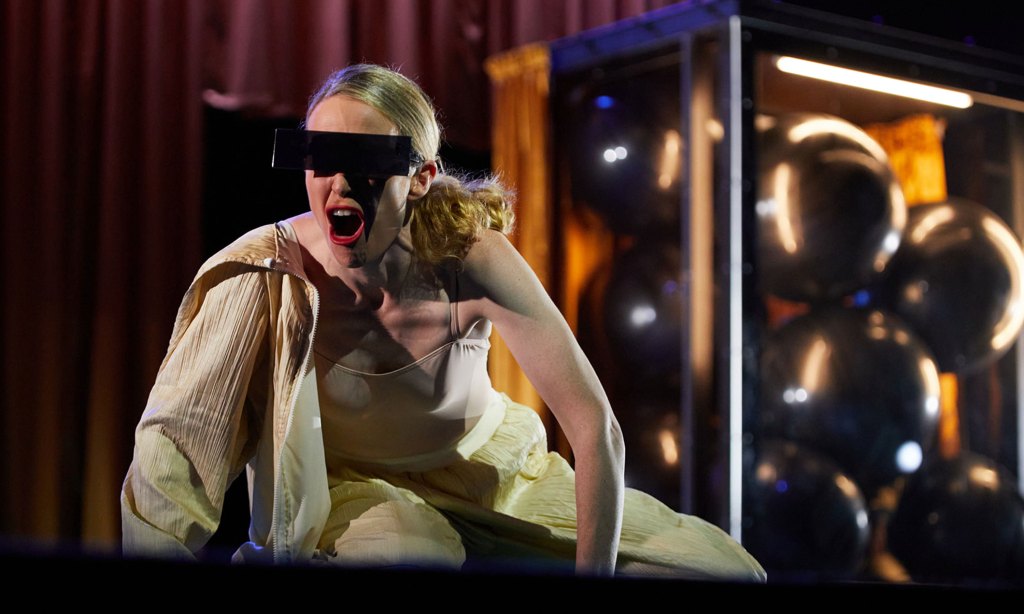 YES veers from the disturbing to the comedic. Photo: Pier Carthew

Truly anxiety-inducing crescendos, often harking back to suffocation, are peppered liberally throughout and accompanied by a devastating and steadily evolving spatial design, which charts a slow descent away from simplicity and “normality” into a series of deconstructed, disturbing, and oddly beautiful tableaus.

The freedom of form is liberating, allowing the performers – who tread an expert line between self-awareness and full characterisation – to convincingly swap roles, embodying the process by which effective social conditioning breeds new architects of damaging social systems.

Despite all these markers of excellence, YES falls just short of filling up the audience with its ideas. There’s a curious emotional vacancy that persists in some tracts of the work. This is notably absent when Valente’s pulsing and bass-y sound composition kicks in, but acutely present in the scenes that veer toward the aggressive. It’s in these scenarios – when a power imbalance is expressed through swearing, for example, instead of significant silence – that the script feels like it’s shifting away from showing, and into telling. A few more instances of restraint might have allowed space for the emotional to surpass the intellectual.

YES, while not completely immersive, is still a remarkable experience. It’s an effective physicalisation of the nauseous realisation that while the strictures of acceptability tightly bind us, it’s impossible to agree upon whether those forces are real or imagined.

YES is being presented by The Rabble and Vitalstatistix, in association with State Theatre Company SA, at the Waterside Workers Hall in Port Adelaide until June 26.