We have been warned for more than 50 years about climate change. The rapid deterioration of our biosphere is a concept terrifying to consider. Reports of polar melting, sea levels rising, and increasingly chaotic weather patterns have the enormity and unreality of science fiction. So how do we countenance this in ways that might sink in?

Dry, Catherine Fitzgerald’s mordant little climate satire, presents  the subject in a way that is often brutal and inescapably local. Set on a property in the arid hinterland of South Australia, Dry is a dystopian glimpse of both the present and the near future.

Two middle-aged sisters, Patience and Ellen, are holed up in a ruined farmhouse, running out of food and measuring water by the spoonful. The town pipeline has long been shut off. Their neighbours and the nearby townspeople have been put on a train and moved to refugee camps in the Capital.

The sisters defiantly refuse to move and spend their time trying to desalinate seawater and ward off snakes. They are like something out of a Beckett play: waiting in vain for the return of Ellen’s husband Klaus while they bicker about trivialities and reminisce about a bygone agrarian era. 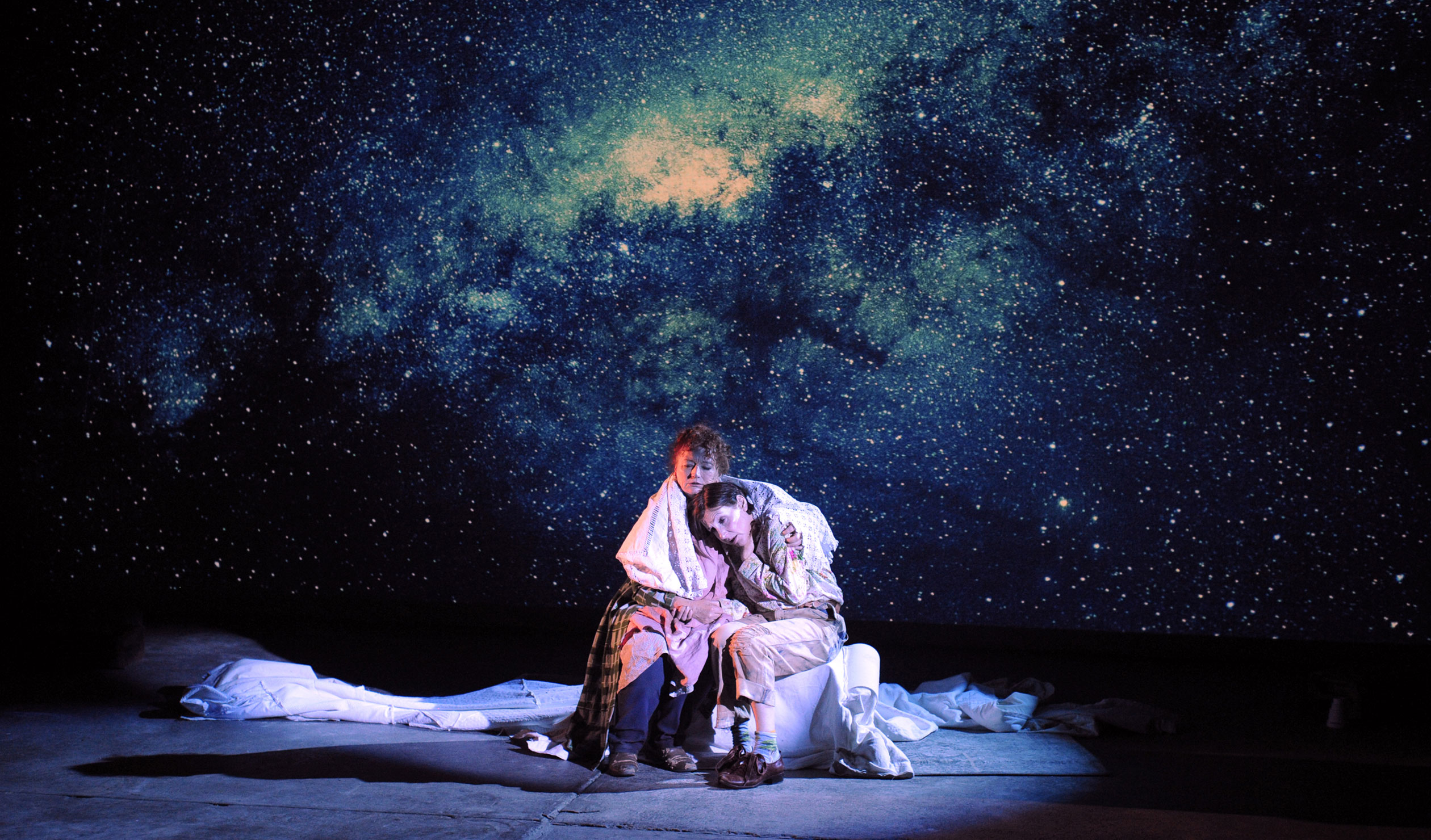 Fitzgerald’s engaging production has a dreamy quality. There is a nostalgia and child-like regression in the sisters’ ruin.

Under the high roof and on the spacious stage of Hart’s Mill at Port Adelaide, designer Gaelle Mellis’s set consists of a large screen for back-projections, a battered tent and a scattering of heirloom furniture – a carver armchair, Bentwood dining chairs, and a wooden table for mock tea ceremonies from bone-china cups and saucers.

The stage is sumptuously lit by Nic Mollison in reddish dust and buttery sunlight tones which, combined with Catherine Oates’s winsomely lyrical music, lend an elegiac melancholy to this catastrophic predicament.

And to ensure we are in no doubt where these events are taking place, Alex Frayne’s extraordinary landscape photography is magnified on screen, depicting South Australian scenes from Yanerbie Dunes, Oodnadatta Track and the landscape around Port Augusta.

Later in the play, when the sisters, joined by an unnamed African man, operate a Kalamazoo hand-pumped rail track car to move to what they hope is safety, Frayne’s photos of rusted-out signage, abandoned water tanks and petrol bowsers form a rolling diorama of the already visible decline in our rural hinterland as the Goyder line presses further south. 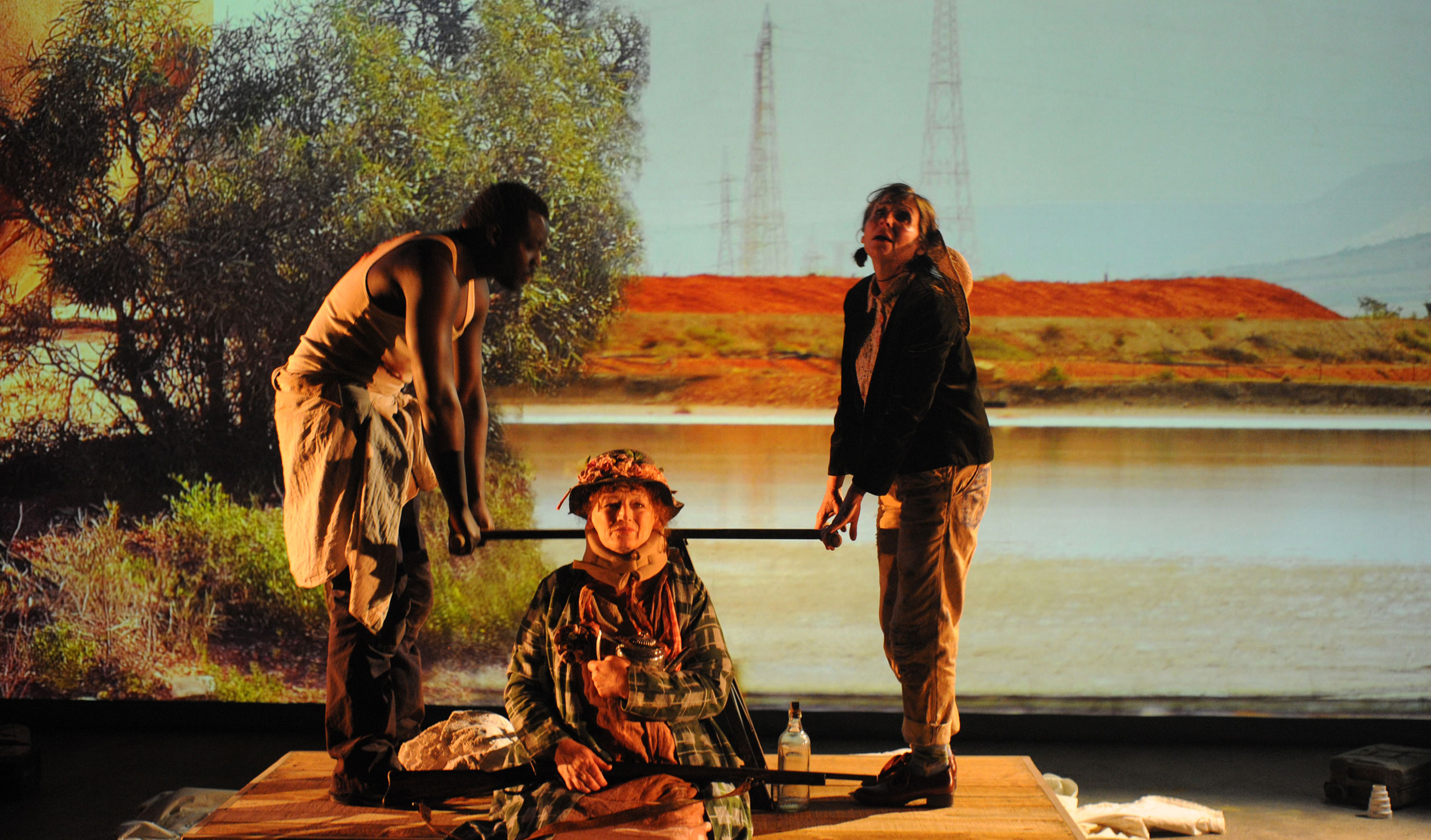 The performances are excellent, capturing the zany, but also tragic quality of Fitzgerald’s text. As the somewhat misnamed Patience, Eileen Darley, is the classic elder sister, adept at manipulating and gaslighting her gormless younger sibling. Darley, dressed in brown gingham with her lustrous red hair, is like some wise-cracking, marooned Southern Belle, steeped in casual racism, insisting on etiquette but swearing like a trooper, and ­– rifle in hand – determined to prevail.

In contrast as Ellen, Caroline Mignone is skittish, uncertain, strangely poetic and impishly funny. Her sinuous physical comedy and deadpan rejoinders are a delight (and a relief from the torpor) as both actors explore the mercurial, but repetitively absurdist, interplay of these habitual sisters.

As the unnamed, mysterious man, the other who brings ill tidings of the tyrannical chaos of the Capital, Stephen Tongun is memorably eloquent. We get only fragments of his origins but his speech of gratitude for being taken in as a refugee is laden with the author’s irony, and his treatment at the hands of the sisters is a reminder of white colonial presumption.

Dry is an intriguing work with a quiet ambition which captures us in unexpected ways. It is awkward in places, sometimes cryptic, and the final scene needs to be less abrupt.  But it is richly imagined, visually engrossing, and asks uncomfortable questions which are long overdue.

Dry, written and directed by Catherine Fitzgerald, is produced by Far and Away Productions and Country Arts SA in association with State Theatre South Australia. It is playing at Hart’s Mill, Mundy Street, Port Adelaide, until November 20.