The Flying Penguins’ cast, under the direction of David Mealor, is of tremendous calibre and presents a sleek, sharp production.

The characters, mostly, are larger-than-life salesmen with personalities that simultaneously charm and offend, evoking complicated sympathies from the audience. Each actor finds range and depth within his portrayal, ensuring that the agents are not caricatures but individuals with both flawed and redeemable qualities.

Throughout the production, they maintain a pace and chemistry that plays to the humour and heartbreak in the landmark play, which playwright David Mamet dedicated to Harold Pinter. Its 95 minutes is delivered without an interval, continuity being essential for the plot’s mounting tension.

Act one, set in a local Chinese restaurant – the out-of-hours site for some of the most significant business deals – introduces the agency staff in pairs. With soy sauce, noodles and chilli flakes between the characters, the audience is witness to a series of power play-offs.

The opening scene features office manager John Williamson, played by Bill Allert. Williamson is a cold character and the least physically animated on stage, which effectively enhances his status within the office. He is juxtaposed by Shelly Levene (Rory Walker), a tired, older real estate agent in the slump of his career. The dynamic between Allert and Walker is comical and cruel; it is a standout pairing.

The pitiful character of George Aaronow (Nicholas Garsden) is placed alongside the erratic, and at points hysterical, Dave Moss (Christopher Pitman). In their first scene, the two share hilarious banter, and both portrayals independently peak in the second act.

Mark Saturno’s portrayal of salesman Richard Roma is unnerving – his brutality contrasted with his charisma is uncomfortably convincing. As Roma moves between comradery for his co-workers and cunning plays of self-interest, he epitomises the complexities of Mamet’s characterisations. 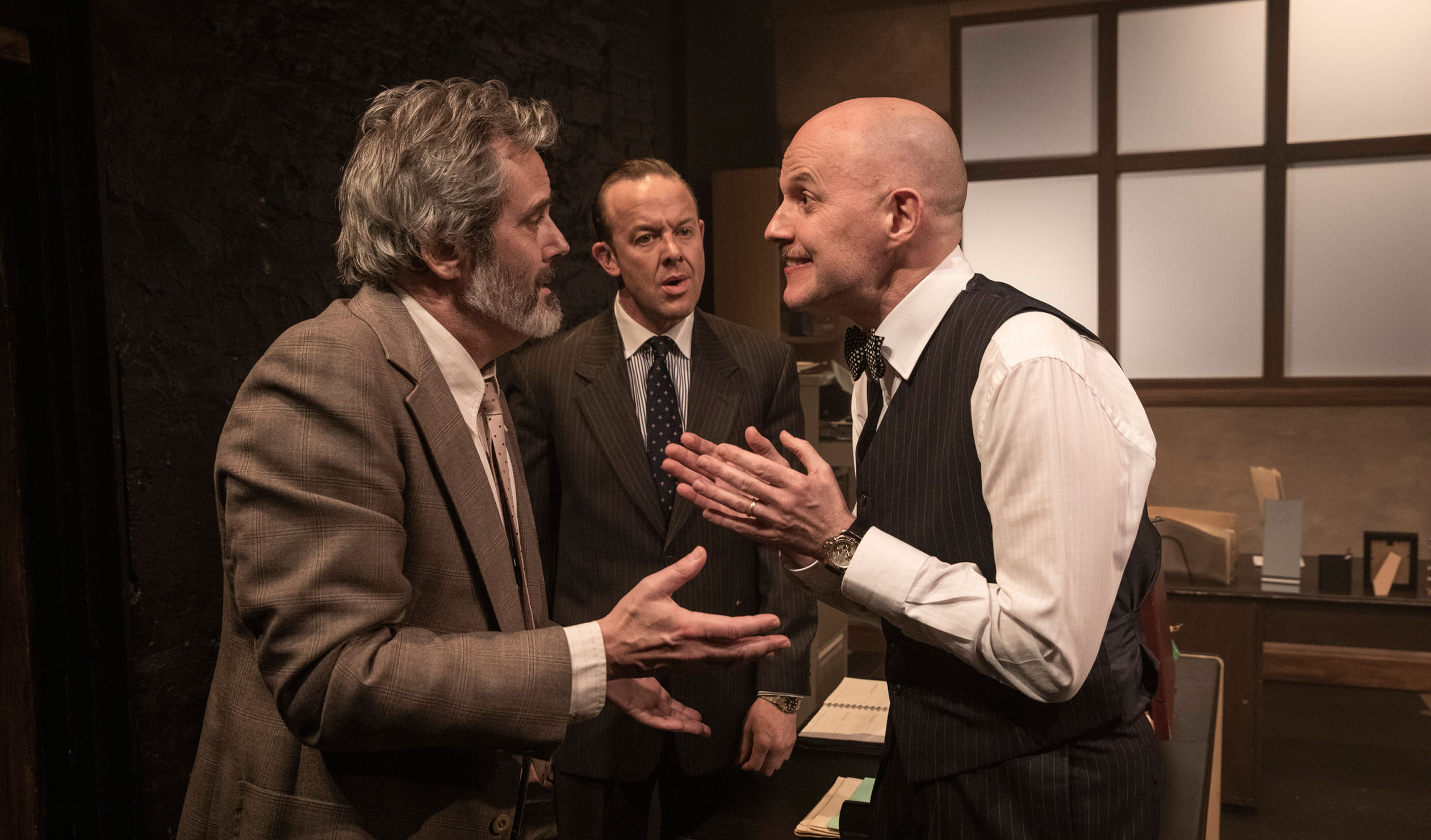 The set, designed by Kathryn Sproul, is impressive, and the swift and seamless change between the Chinese restaurant and the real estate office is both a dramatic reveal and a political gag which, accompanied by Quentin Grant’s musical composition, is quite a feature of the production.

The real estate office is a representation of the demographic that occupies it: a swimsuit model calendar hangs next to a dart board, and a miniature figure of a hula girl sits on one of the four desks. A ceiling fan spins constantly on the lowest setting, giving a sense of office stuffiness that heightens the discomfort between the characters.

Ironically, as the real estate agents are being investigated by Detective Baylen (Chris Asimos), the office resembles a police station and reflects the shared language of detectives and salesmen: leads, suspects and prospects.

While Glengarry Glen Ross was written in the 1980s, and sensitivities have evolved, the themes and characters, highlighted by commendable performances, touch on truths that live on: capitalism’s downfalls, the eternally “dying breed” of toxic men, and how the need to maintain dignity will push anyone to the edge.

Presented by Flying Penguin Productions in association with Brink Productions, Glengarry Glen Ross is at the Bakehouse Theatre until September 25.