“The potato race is a real thing,” writer Melanie Tait tells us in her program note for The Appleton Ladies’ Potato Race. “It happens every year in my hometown…”  Her town is not called Appleton, though, it is Robertson in New South Wales. And the characters are not members of her family, or other identifiable locals.

But, like her central character, local doctor, Penny Anderson, Tait did actually return home to discover that the cash prizes in the annual potato race (where people run a circuit with 50 kilo sacks of spuds on their shoulders) were greatly discrepant between the men and women contestants. And when she tried to do something about out it, all hell broke loose.

Kathryn Sproul’s design incorporates large embroidered panels featuring Australiana motifs and samplers, as well as whimsical show posters for the crop swap and the potato carnival. Her elegant, stylised high framed set features walls and doors (even the top of the proscenium) in faux corrugated iron which open out to enlarge the stage. They also provide surfaces for lighting designer Nic Mollison to project washes of contrasting, often bright colour, which, combined with his buttery scene lighting,  gives the production a delectable optimism even when emotions are running high.

Andrew Howard’s soundscape, like his work for the recent Euphoria, uses melodic ambient composition to excellent subliminal effect. His setlist of Australian female pop, including The Divinyls, sets the mood before the play begins, and the hilarious retro cameo of 1988 to the sounds of John Farnham’s “Pressure Down”, along with the acoustic version of Powderfinger’s “These Days” later, enrich and locate the action. 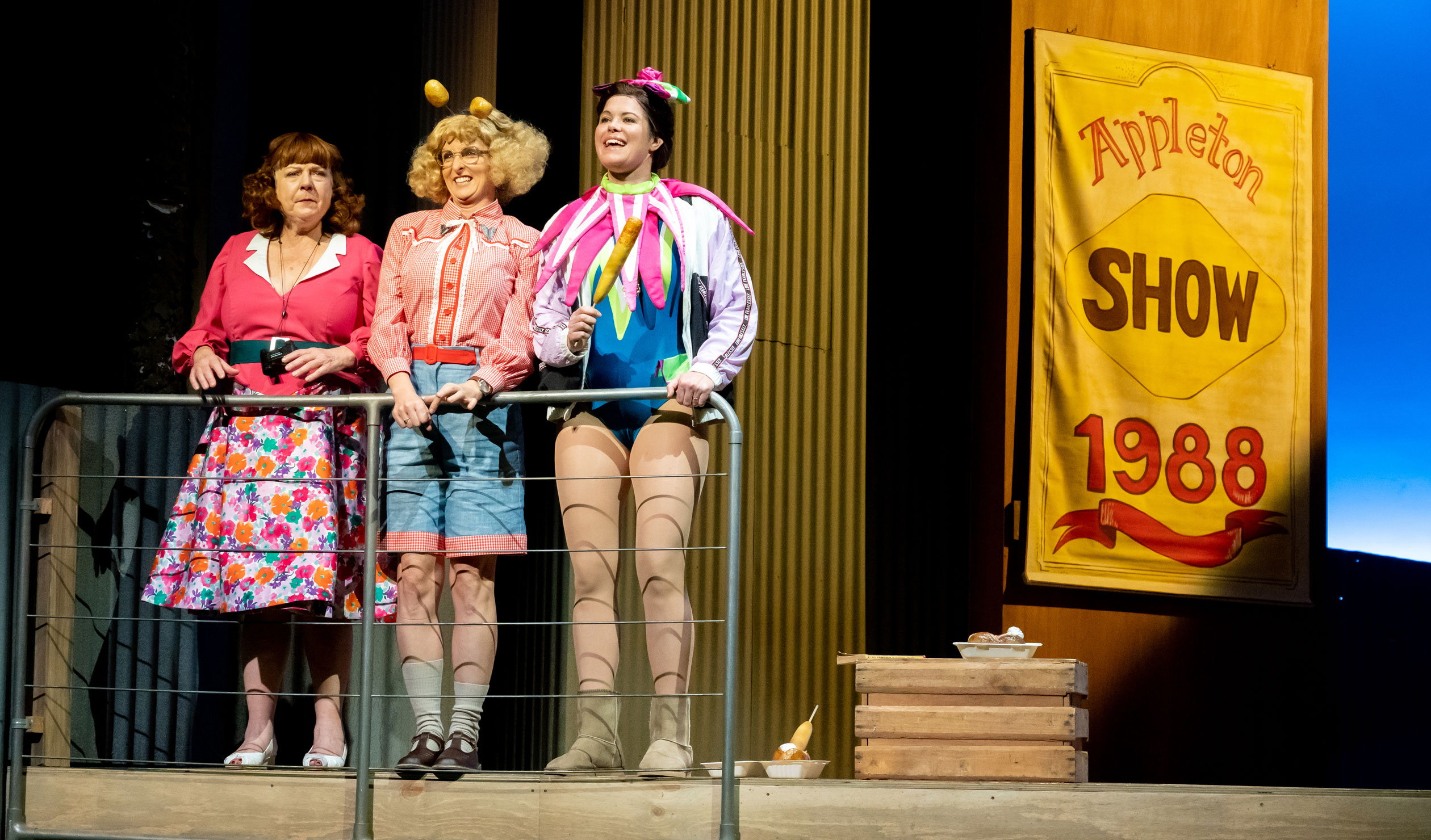 The performances, while often broad, are warmly and carefully drawn. As Barb Ling, Genevieve Mooy is kindness itself. With a drawl you could drive a tractor through, she is always looking to make the best of things ­– unlike Carmel Johnson’s peevishly abrupt Bev Armstrong, whose astute scepticism borders on downright intolerance. Tait writes these 60-something friends well, and they, like all the characters, develop interestingly in the final scenes.

Susie Youssef, as the Syrian refugee Rania Hamid, brings precision to a woman, who, a trained art teacher and culturally sophisticated, has to navigate a suspicious and openly bigoted community. Her friendship with Nikki Armstrong, the self- described bogan, played with affectionate energy by Sarah Brokensha, is especially intriguing. Brokensha’s Nikki is a strong portrait of a capable young woman, defined by class and lack of opportunity, working incessantly to raise four children and let down by a drug-addled husband.

The outsider, Melanie Tait’s proxy in the play, is Penny Anderson, memorably presented by Anna Steen. Returning as the local doctor, estranged from her lesbian partner, Penny is the one who got away. Financially secure, cosmopolitan and outspoken in a third-wave feminist way, she is the trigger for the controversy over potato prizes and the general inclination for the ladies of Appleton to get uppity.

With a title that inclines us to think of those genteel English rom-coms about Leek and Potato Pie Peel Societies, Marigold Hotels and Little Bookshops in Devon, The Appleton Ladies’ Potato Race is a lot less whimsical than it first appears. It is world of women, described by women. There are men but we don’t see or hear them directly.

The play is raucous and rather obvious initially, but develops with a complexity and subtlety that gives its well-managed conclusion an unexpected depth and impact. Elena Carapetis and her capable creative team have recognised and seized these theatrical opportunities and made this potato race a winner.

The Appleton Ladies’ Potato Race is playing at the Royalty Theatre until June 19.