You might say, that for satirist Jonathan Biggins, Paul Keating has been his bread and butter for a long time. As part of the Sydney Theatre Company’s Wharf Revue, along with Phillip Scott, Drew Forsythe and a select group of associates, Biggins has made an art form of topical sketch comedy for more than 20 years. Keating loomed large and often in the Revue, as he does in political life, long after his departure from parliament in 1996.

But in this multi-faceted stage monologue, Biggins has given depth and dimension to his study of Keating. He has brought his subject from skit to theatre, from sketch to a much fuller portrait. Wryly describing his Gospel as “the first three-dimensional, unauthorised autobiography written by someone else”, Biggins inhabits, impersonates, and embodies his subject with startling authority.

It starts lightly with some stage banter. Arriving with a fanfare from Mozart’s Don Giovanni (and echoing Barry Humphries), Biggins has Keating engaging in postcode sneering as he briefly quizzes the front-row audience – three random locations: Carrickalinga, Maylands and Myponga almost speak for themselves. But, of course, Biggins is working all of the Keating stereotypes – his haughtiness, impatience with trivia, his unwillingness to suffer fools or endear himself.

It is when he dims the stage light and switches on the slide projector that the narrative begins to develop and gather focus. Keating’s early life, the influence of his mother and grandmother, his father’s shift from tradesman to manufacturer (then the crisis of his death from a heart attack when Keating was only 11) is related with precision and feeling. There are still plenty of witty laughs but Biggins is bringing a playwright’s ambition to his subject and draws us into his world.

From the age of 10, Keating is letterboxing for the Labor Party and getting more involved in political activity. Biggins describes the dapper young man, already immersed in classical music, leaving school at 15 to work for the Electricity Board. We are reminded that Keating managed a pop group, The Ramrods, and guided them to a record contract with EMI. He was ready to take them to London but they lacked his belief.

Instead he turns his attention to political manoeuvring, sparring with the left factions, angling for pre-selection – eventually – in the federal seat of Blaxland. Elected in opposition in 1969, he is then returned to the Whitlam government in 1972. As a junior MP he studies the game closely. Mentored earlier by political legend Jack Lang, Keating befriends parliamentary officials to better understand the intricacies of influence and power. He is like David Copperfield (with more than a dash of the Artful Dodger) rising in the parliamentary world during a momentous time.

The Whitlam government makes history and is demolished by the same turn of the wheel. Keating watches and learns, and in 1983 he and Bob Hawke forge one of the most successful political partnerships in our history. 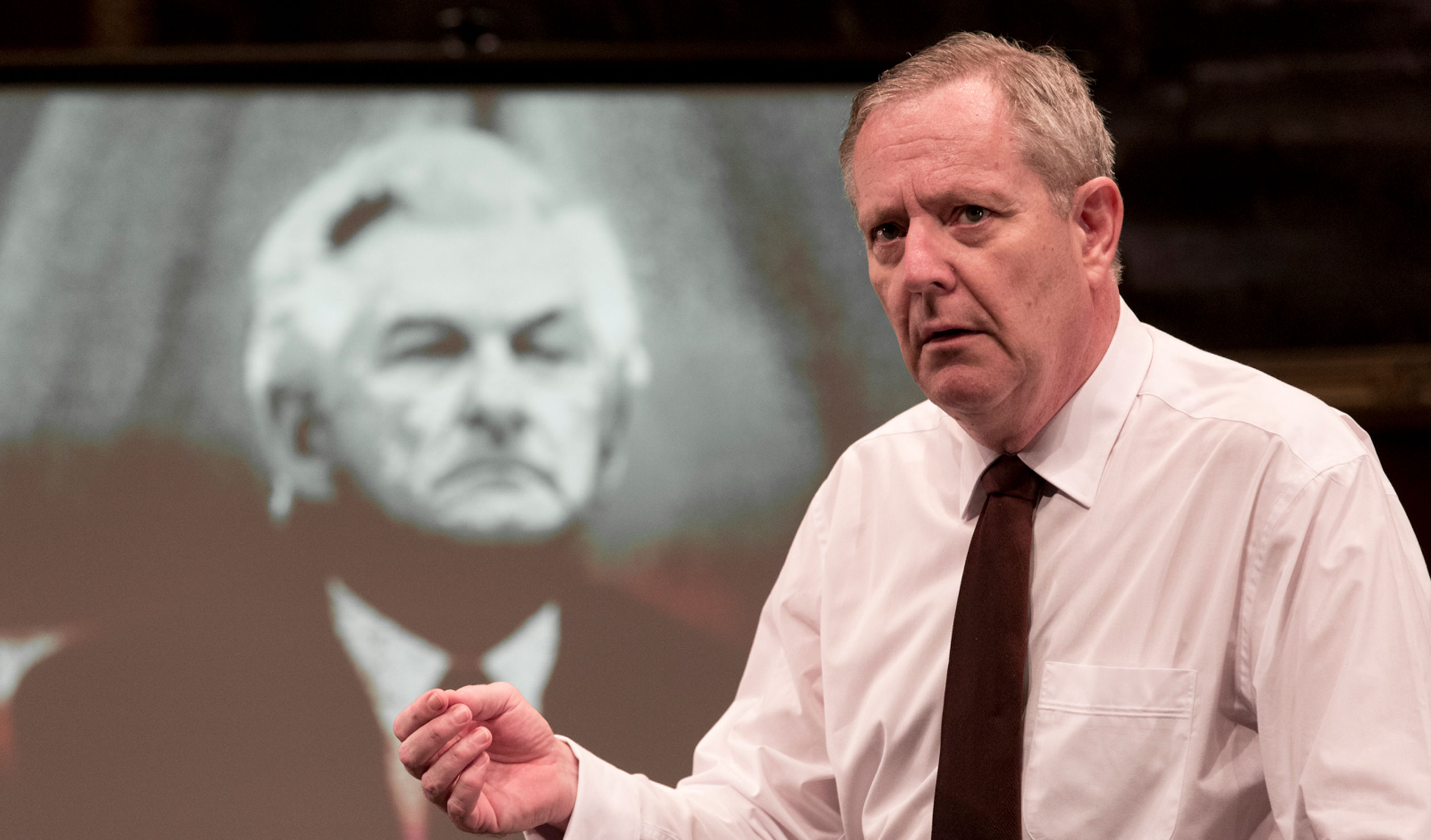 Biggins unfurls Keating’s career with gathering interest and precision. We find the details engrossing. It is just the way Keating himself engaged the electorate in his narrative of economic and social improvement.

Director Aarne Neeme has deftly guided Jonathan Biggins through this excellent venture. Mark Thompson’s set (subtly lit by Verity Hampson) aptly captures the Keating aesthetic – a French clock, 18th-century portraits of Napoleon (and is that Robespierre?), the gilded chair, the dark sumptuous bureau and the classical columns all hover between parody and the trappings of a connoisseur. Keating shows us his Breguet pocket watch. He likes nice things. The interesting thing is he wants all of us to have them too.

Biggins’ performance is remarkable and unerring. What begins as a stock impersonation becomes much more. Despite bearing little resemblance to Keating, he mimics gestures and idiosyncrasies to great effect.

Using his height as Keating does, Biggins moves with the edgy purpose of a matador, one hand on his hip, the other rhetorically demolishing a political adversary. The Blacktown accent is there, clipped, sneeringly cadenced, witheringly considered, wickedly aphoristic – all part of the Keating armoury. But then there is also the stillness and authority of the Redfern speech.

The Gospel According to Paul brings good news and not just to the disciples. It is witty, often hilarious, occasionally excoriatingly funny – all of the rapier badinage that we associate with Keating. But there’s more. More than just verbal steak knives. It is a study of the art and purpose of leadership, and a reminder of a notion of government that wants to be the best for its people. Biggins is using recent past history to shine a light on the tawdry present – with its deception and spin, its shabby cronyism, and mediocre lack of purpose.

State Theatre Company SA is presenting The Gospel According to Paul at the Dunstan Playhouse, Adelaide Festival Centre, until May 1.