Breathing new life into a classic, Gaslight is a perfect choice for the first major production to be staged at the gorgeously refurbished Her Majesty’s Theatre. Cunningly demonstrating that the past always has something to teach us, this classic play still resonates just as powerfully with audiences today as when it was first staged.

Written in 1938 and spawning the classic 1944 film starring Ingrid Bergman, the play is set in the Victorian era of the late 19th century, yet it explores gender and class issues that are sadly still relevant today. Using the original Victorian staging, Director Catherine Fitzgerald has cleverly brought the material’s feminist and social themes to the surface, while never detracting from the suspense and mystery of the underlying narrative. 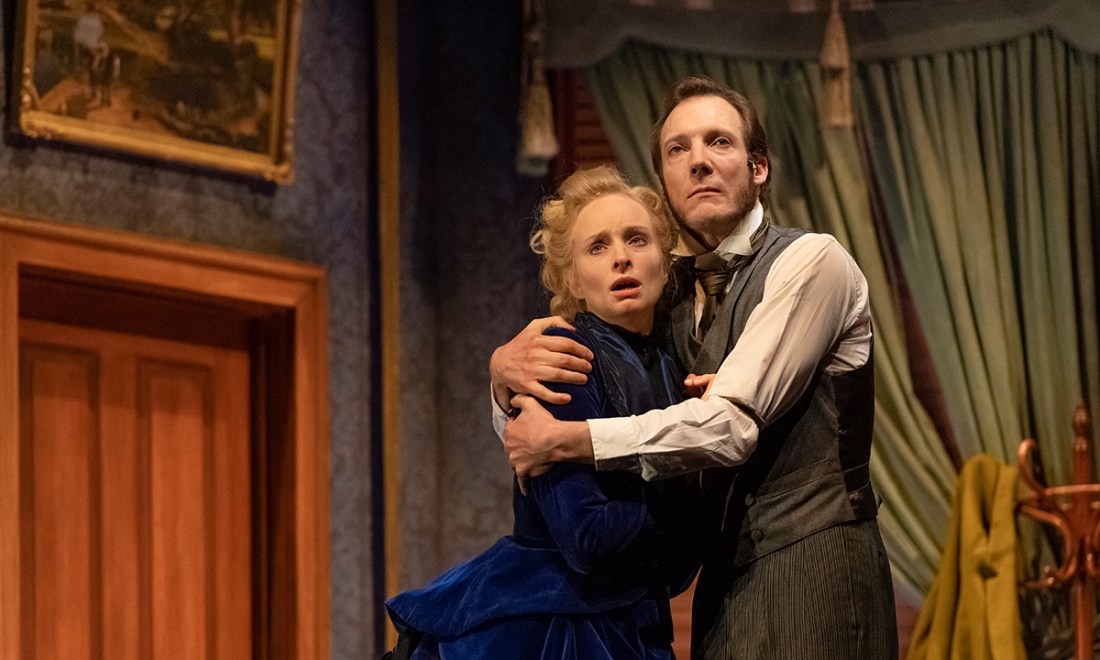 This suspenseful drama so perfectly illustrated a particularly loathsome form of domestic abuse, in which a person is psychologically manipulated into questioning their own sanity, that the play’s title has come to describe the behaviour. To “gaslight” someone has now entered the vernacular and the verb can be found in the Oxford English Dictionary. 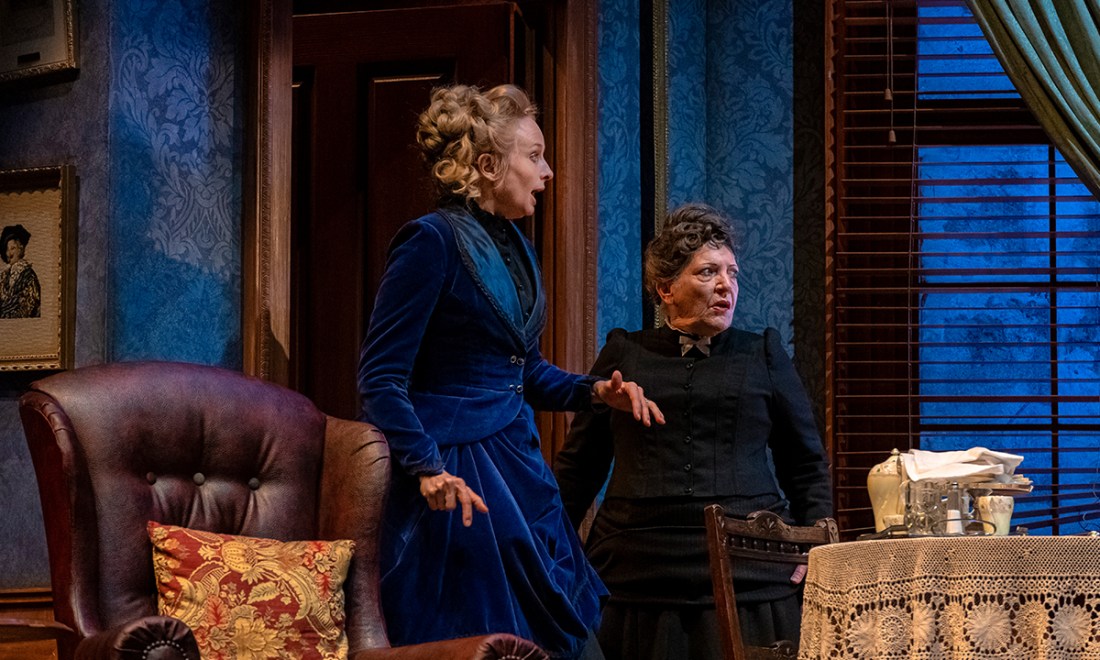 Ksenja Logos as Bella and Ellen Freeman as Elizabeth

The victim in this case is Bella Manningham, played with delicate finesse by Ksenja Logos. She’s close to breaking point: losing her belongings, pictures are disappearing from the walls and she’s hearing footsteps in the night coming from the top floor of the house, which her husband keeps locked. Added to this, when her husband leaves the house each night, the gaslights in the drawing room mysteriously dim, only to brighten just before he returns. Her husband, the detestably patronising Jack Manningham, brilliantly embodied by Nathan O’Keefe, tells her she is losing her mind. And as the evidence he produces begins to mount, she is starting to believe him. 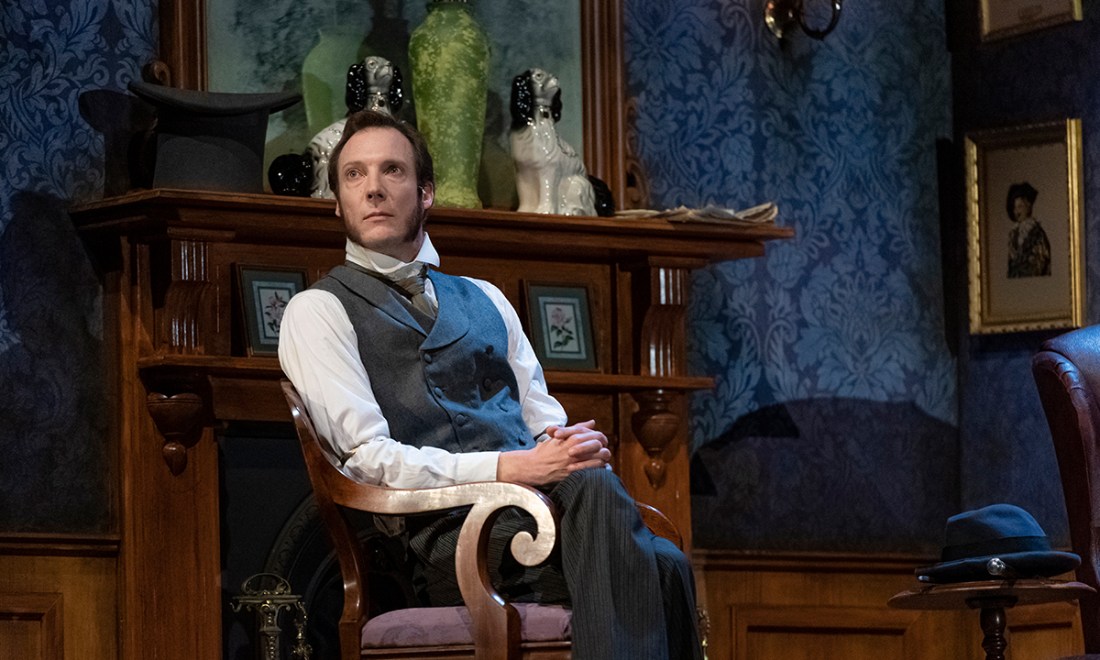 The entire play is set in one room over a single evening, the close and claustrophobic atmosphere of the slightly dingy Victorian drawing room ratcheting up the tension of the drama. The first act was so fraught with the patriarchal and class power wielded by Jack towards his wife and domestic staff (charmingly played by Ellen Freeman and Katherine Sortini) that the audience’s tension and anger was palpable. So despicably condescending and manipulative is Jack’s behaviour that if the delightful Eileen Darley hadn’t made her appearance as Inspector Rough to lighten the atmosphere and intensify the mystery, the strain of witnessing such extreme emotional abuse would’ve soon become unendurable.

Casting Eileen Darley in the traditionally male role of Inspector Rough was a wonderful touch. Not only was Darley a breath of fresh air in that suffocating drawing room, but her embodiment of Inspector Rough put a welcome female face on a character in this play with some agency and power. Bella and house-staff Elizabeth and Nancy are all at the mercy, not just of Jack’s behaviour, but of the class and gender structures that are actively disempowering them. So Fitzgerald’s flipping of Inspector Rough’s gender was a refreshing nod to the fact that traditionally it has been other women who have supported those finding themselves in emotionally abusive relationships. 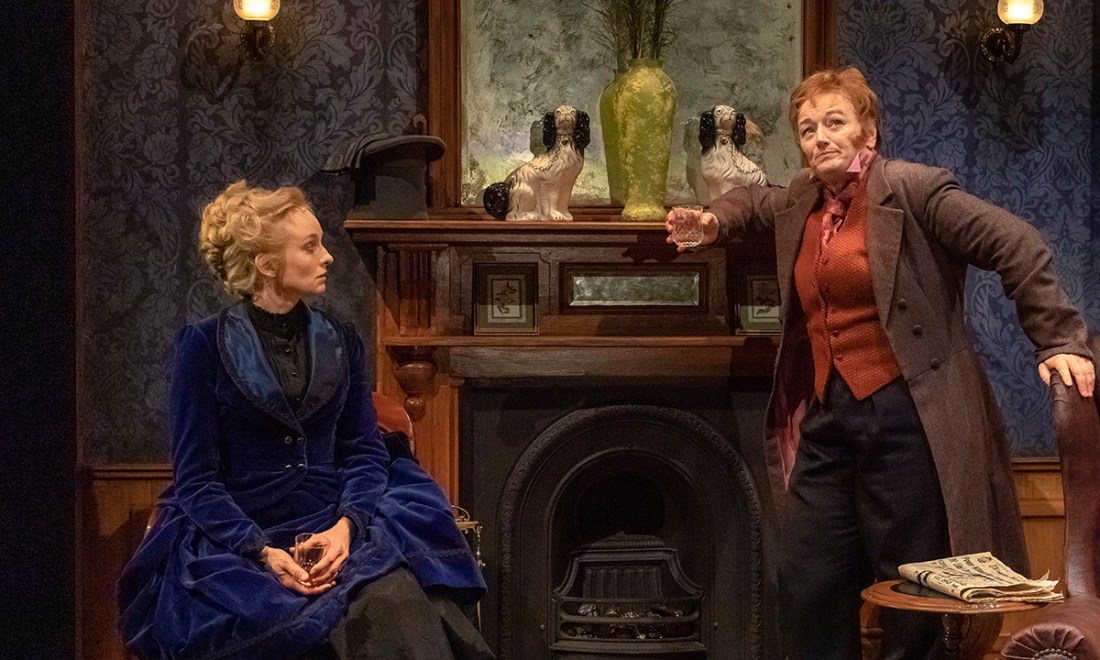 Casting Eileen Darley as Detective Rough give a female face some welcome power.

This production of Gaslight is a wonderfully suspenseful and emotionally-charged psychological thriller, with just enough humour and surprise to lighten an otherwise distressing portrayal of domestic abuse. 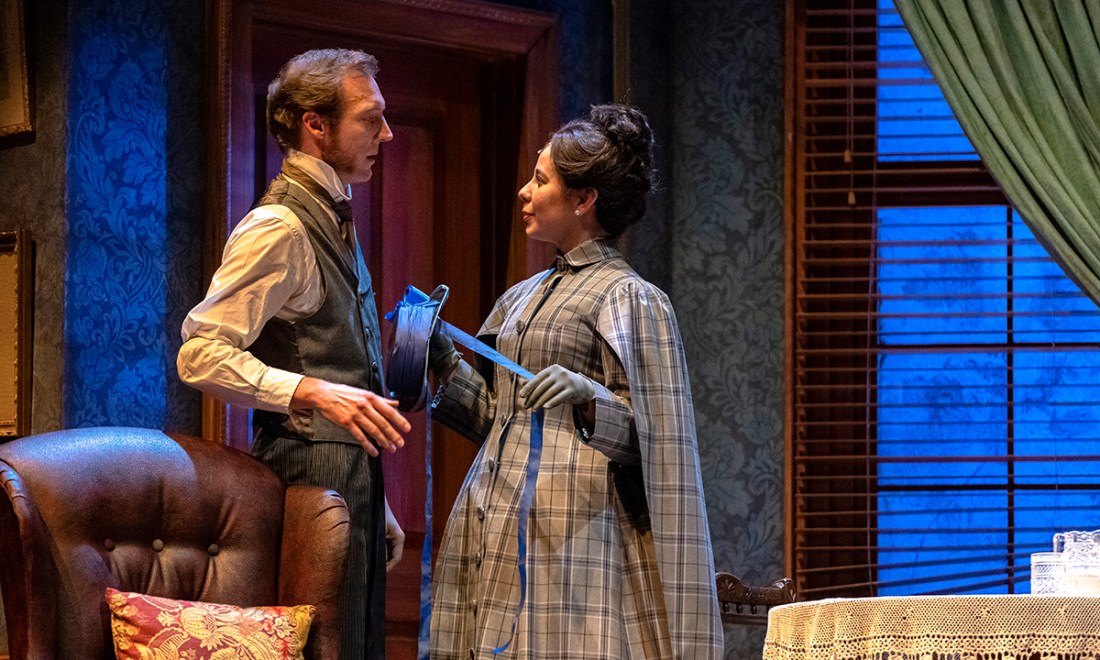 Nathan O’Keefe as Jack and Katherine Sortini as Nancy.

The scheduled season of Gaslight from September 4 to 19 at Her majesty’s Theatre has now sold out, but an additional performance has been added on Saturday, September 19 at 2pm.