Writer and director Jada Alberts, from Larrakia country in the Northern Territory, has penned and staged a play from the heart and lived experience; her words realistically portray the ongoing, inter-generational trauma being suffered by Indigenous people.

A co-production by the State Theatre Company of SA and Melbourne’s Malthouse Theatre, performed by an exceptionally talented all-Indigenous cast, Brothers Wreck shows life in a family that has to live with suicide and depression, and which frequently has to deal with death.

Dale Ferguson’s set, of plastic walls and white security doors, is versatile enough to simulate the starkness of a Don Dale detention centre, a home or a beach, and provides unique challenges for lighting designer Chris Petridis.

The central character, Ruben (played by Dion Williams), is a troubled young man who, like many males, attempts to deal with his issues by himself. He has a loving family, but feels feels alienated and disconnected from life as he struggles with the suicide death of his cousin.

Williams delivers a powerful and moving performance, especially in the monologues which explain the pain and torment he is attempting to deal with and why he has cut himself off from others.

Experienced actress Lisa Flanagan is a natural on stage and her portrayal of Aunty Petra shows the compassion, hurt and love in families. Flanagan’s performance, especially her explanation of why she should be respected as an elder, is a tour de force. 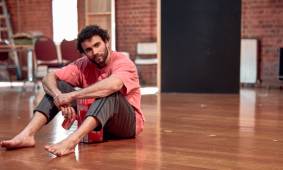 Trevor Jamieson, also an accomplished performer of stage and screen, radiates a grounded wisdom and earthliness in his character, David, a counsellor who desperately tries to help Ruben, while Nelson Baker (as Ruben’s friend Jared) and Leonie Whyman are excellent as the young couple in love. They represent hope for the future, but are also embroiled in passionate, dramatic family confrontations.

Alberts’ Brothers Wreck is an engaging piece of theatre which uses language skillfully, exposes raw emotion and highlights the need for significant change in this country. True reconciliation can never occur while one mob of Australians continues to experience severe disadvantage, dispossession and degradation.

Brothers Wreck is playing at the Odeon Theatre from June 27 until July 14. The play contains strong coarse language and adult themes including references to suicide and alcohol abuse. It is recommended for mature audiences over the age of 15. Read InDaily’s interview with cast member Nathan Baker here.