The University of Adelaide Theatre Guild again excels itself with The Peach Season, which is directed by the experienced John Graham, a great advocate for the quality of Australian writing, and features a strong cast that draws the audience into the dilemmas and emotion of the story.

The real star, however, is playwright, novelist and scriptwriter Debra Oswald, who has written for notable TV shows such as Offspring, The Secret Life of Us and Bananas in Pyjamas. The Peach Season is a brilliantly written and accessible script about the conflicting needs of safety and adventure in all our relationships and within ourselves; it touches on one of the core experiences of any age group.

The story revolves around a mother, Celia (Emma Kerr) and daughter, Zoe (Zoe Muller), whose quiet, secure life on their peach farm is disrupted when a shady half-brother and sister – Keiran (James Watson) and Sheena (Ellie McPhee) – stumble onto their property due to a car breakdown. 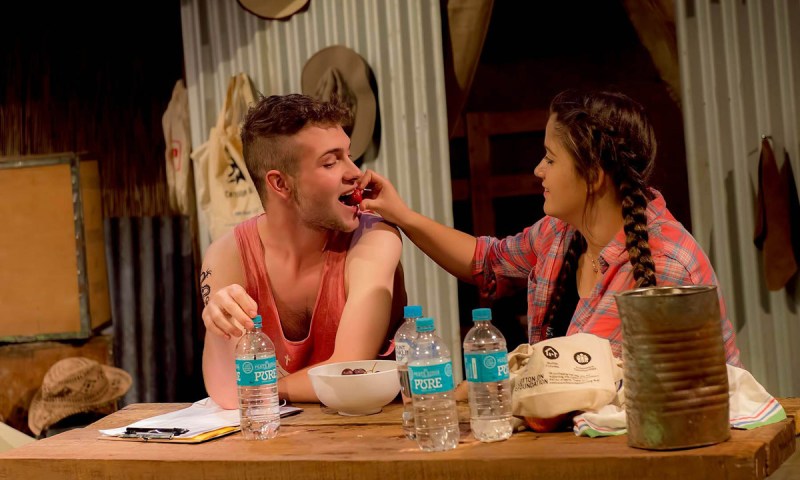 James Watson and Zoe Muller as Keiran and Zoe.

They have to work on the farm to pay for the repairs. Young love blossoms between Keiran and Zoe, sparking a cascade of events that threatens Celia’s need to protect her daughter.

Kerr and Sheena become central characters trying to protect their loved ones in the presence of love and sinister forces. Aided by well-conveyed changes in mood, lighting, pace and a versatile set, they evoke true emotion in their journey from carers to letting go.

Watson and Muller are appealing, and at times disturbing, as the young couple. Susan Nelle excels as Dorothy, Celia’s elderly neighbor and the wise observer who connects the audience to Oswald’s themes through her role as narrator, while James Black is outstanding as her son Joe, the middle-class good guy struggling with his responsibilities and fighting his inner desires.

A highly recommended production of a beautifully written play. Just the cultural tonic to ease the let-down from Mad March.

The Peach Season will continue at Little Theatre, University of Adelaide, March 17-19.