It can be a fatuous question to ask what a piece of music “is about”, because any artwork simply stands for what it is and should not need external meaning applied to it. Or at least that is what philosopher Theodor Adorno believed.

However, in the case of Cathy Milliken’s Ediacaran Fields, premiered by the Adelaide Symphony Orchestra on the weekend, it certainly did help to know something about the ideas she has explicitly built into this alluringly beautiful new work.

The clue lies in its title, although only palaeontologists and keen visitors to the Flinders Ranges would know that. Near Parachilna lies the newly declared Nilpena Ediacara National Park, site of extremely rare fossils that date back 600 million years ago to when multicellular organisms first appeared on earth.

Imagine sea fans, sea squirts and primitive jellyfish, for that is what Ediacaran fauna apparently looked like.

Ediacaran Fields is highly pictorial to begin with. One hears pulsing, slithering figurations across the orchestra that combine into a continually evolving entanglement of mobile energy.

The most striking touches were when instruments gradually slid down in pitch to depict these creatures gliding onto the seafloor and sending up, as it were, puffs of mud as they came to a rest. What a wonderfully bejewelled underwater world Milliken has created, and with a sophistication that would embarrass any film composer.

Later in the piece, militaristic bursts of snare drum and trumpet signal the arrival of Cambrian predators who usurp this peaceful paradise. Armed with pincers and claws, explained Milliken, these nasty invaders usher in a new biological era in which animals start killing and eating each other – marking the beginning of all modern lifeforms including ourselves. Much to contemplate.

Milliken is no more guilty of anthropomorphising nature than Saint-Saëns in Carnival of the Animals. But it’s with reason: in Ediacaran Fields, she implores us to view this ancient fossil graveyard as a totem for peace, and that’s a fine sentiment.

Rising to the challenge was a keenly vivid performance that brought her vision to life. Under conductor Benjamin Northey, the ASO delivered the score with great care and precision. Adding atmosphere, 100 unsuspecting audience members had to tap stones on queue at the beginning and end. A fun participation idea, it had mixed success – people were a bit unsure how to create wave of sound rather than just a clatter. 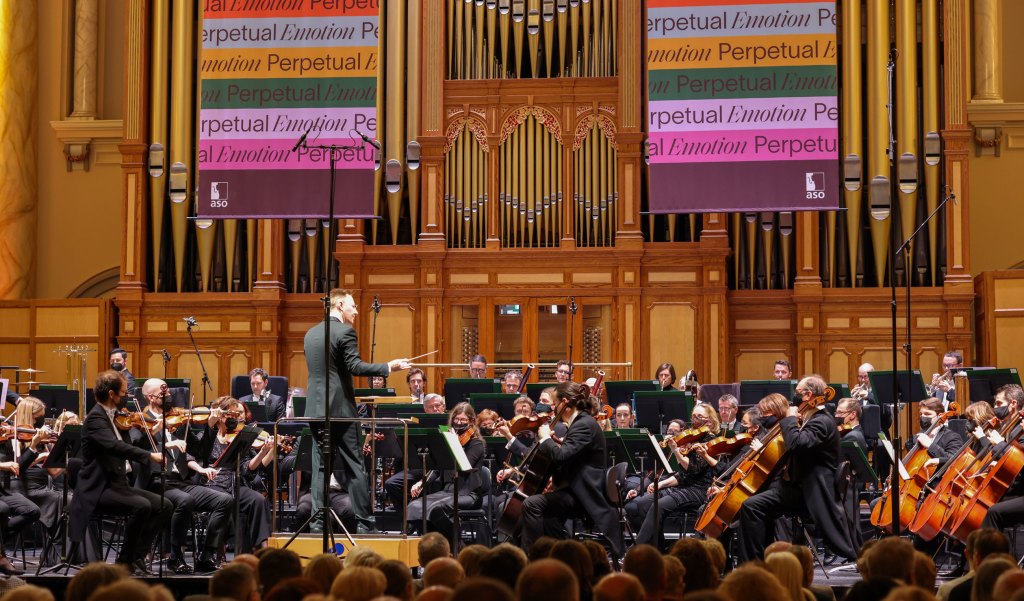 The concert, entitled Serenity, proved entirely worthy of its name when Emily Sun performed Vaughan Williams’ The Lark Ascending. Previously, we’ve only heard this Sydney-born violinist in a chamber music capacity (she played trios last year with Nicolas Fleury and Amir Farid for Musica Viva), and what a discovery it was to hear her with an orchestra. This divine performance began from the quietest whisper, her violin rising ever so gently and eloquently above a delicate shimmer of ASO strings. It felt like time had genuinely stopped, and that we were tuning into the sounds of nature. Hosts of violinists can play The Lark Ascending work very nicely, but Sun’s poetic evocation made this performance precious.

Speaking of Saint-Saëns, his Introduction and Rondo Capriccioso gave an admiring Town Hall audience the opportunity to hear Sun’s playing a second time. In this contrastingly showy piece, she again displayed a delicate touch but coupled it with lightning speed and genuine power in a performance of complete artistry. All through the piece’s whirlwind of scales, arpeggios and triple stops, Sun’s execution was faultless and her judgment impeccable. Just watching her left hand dance athletically all over the fingerboard was a sight to behold.

Full credit to Northey and the ASO for keeping with her in all of the tiniest details of timing. It was an ideal partnership. 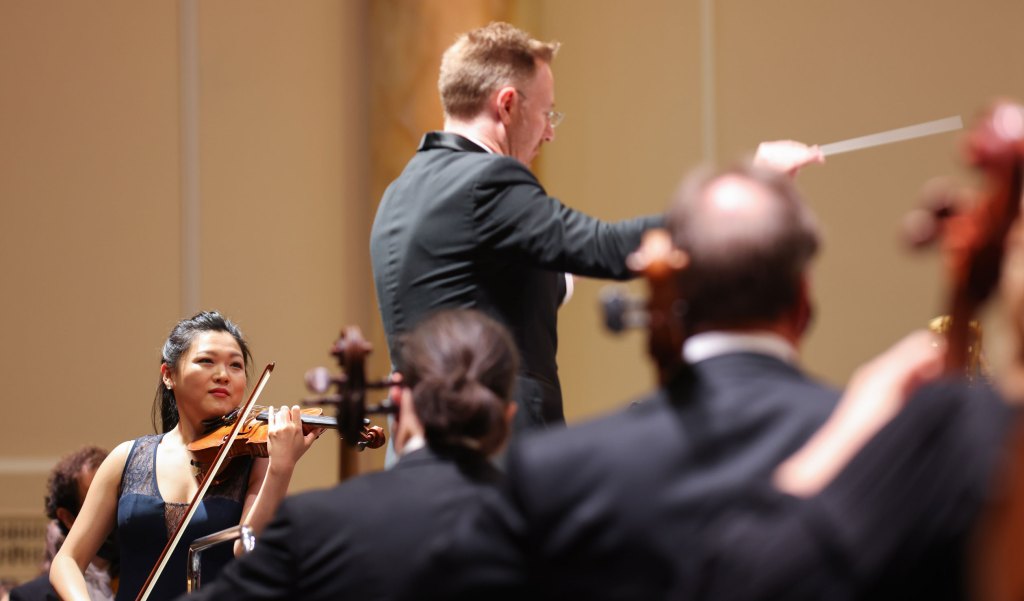 Emily Sun performs with the ASO under the baton of Benjamin Northey. Photo: Tony Lewis

As stimulating as all this proved to be, the main work people had undoubtedly come to hear was yet to come. Mussorgsky’s Pictures at an Exhibition, in Ravel’s much-liked orchestration, is a colossal and intensely coloured work in all the ways that Victor Hartmann’s modest little watercolour paintings which inspired it are not. The mismatch between music and visual source is staggering, at least in terms of scale; but as we know, Mussorgsky wrote Pictures at an Exhibition for solo piano with hardly a thought as to what Ravel, among a dozen other orchestrators, would later do with it.

Northey and the ASO delivered a trim, taut and terrific performance that deviated interestingly from the usual heavy symphonic interpretations that can pump up this work artificially. All its familiar outlines were given a pithy directness, not least of all the promenade theme itself, which conjured up a purposeful strolling from painting to painting.

Gnomus, the piteously deformed gnome who clumps about in ungainly fashion, was satisfyingly gruff and sinister, and The Old Castle was magically wistful thanks to lovely soft playing from Bernie Lagana on solo saxophone – a spell fell over the auditorium at this point.

Lightness is perhaps not a quality that comes immediately to mind with Pictures, but Northey lent an amusing playfulness to the quarrelling children in Tuileries and the chattering fun in Ballet of Unhatched Chicks. It sounded so exactly appropriate, and one welcomed his fresh, modern insights here.

Fortunately, the Great Gate of Kiev held up just fine, too – though doubts about the real structure’s future crossed one’s mind given current world affairs. Every detail was articulately shaped, although a certain momentum seemed absent in this final grand picture and led to a couple of timing errors in the closing bars.

Otherwise, it was an exceptionally tidy performance, and quite the best I have heard from this admirably accomplished Melbourne conductor. Absent was the weighty power that the Belorussian conductor Dmitry Matvienko brought so sensationally to Rach 2 in May. But Northey is compelling, too, and certainly shows that he can elicit marvellous results from the ASO, in this instance across a very wide span of repertoire.

Serenity was presented at the Adelaide Town Hall on June 24 and 25. The Adelaide Symphony Orchestra’s next Master Series concert will be Spellbound, on July 29 and 30. This weekend the orchestra is presenting the She Speaks mini festival, shining a spotlight on music by female composers.