When composer Mahler famously said that “the symphony is the world, it must contain everything”, he was of course egotistically proclaiming how his own grand orchestral designs could relate the full compendium of life’s experiences – all its trials and tribulations.

The fear in approaching his most epic works, such as the mighty Symphony No. 5 in C sharp minor, is that there is little that even the prophetic Gustav Mahler can tell us some 120 years hence about the fate of the world.

There was nothing much to gnash the teeth about in the first half of the program for Adelaide Symphony Orchestra’s Jubilation concert, and this was perhaps good news. Mozart at his most ebullient, courtesy of his overture to The Marriage of Figaro, and then Clara Wieck-Schumann’s remarkable Piano Concerto, both lifted the spirits.

Facing the ASO for his second time was Norwegian conductor Eivind Aadland, and his Mozart is excellent – simply among the best. Choosing a brisk tempo and going for contained energy and tautness, here was a performance that instantly put a smile on the face. Aadland has an unusually wide gestural vocabulary, which means he bobs and dives around a considerable amount before the orchestra, but he implants his picture of the music firmly on the players and crafts their sound with discipline.

Invite him back to play more Mozart, please. It is just a pity he is already signed up to the Tasmanian Symphony Orchestra as its new principal conductor.

Wieck-Schumann has gathered many champions in recent times, most notably Anna Goldsworthy here in Adelaide. We had in this concert another, the Sydney born pianist Andrea Lam. To begin with, her playing in the concerto seemed too high Romantic, too Lisztian, for a work that the composer started writing, extraordinarily, at the age of 13 and completed at 15. Lam applied liberal rubato and grand eloquence that made the work sound a lot more modern than it really was. In truth, it pre-dates all the big piano concertos of Liszt, Robert Schumann and Brahms. But it worked, because this excitable, original work can bear many different interpretations.

The really special moment in this performance happened in the Romanze middle movement, where solo cello joins the piano in an intimate duet. Simon Cobcroft, the ASO’s principal cellist, played with rapturous expression here. It really sounded more like a cello concerto with piano accompaniment at this point.

After a joyously spirited finale, Lam offered another work by Wieck-Schumann as an encore, her Romance in A minor. Composed in 1853 when her husband, Robert Schumann, had begun his descent into mental illness, its melodies were flooded with melancholy. One could not help noticing, too, how her warm, finely voiced piano style sounded so much like Brahms; except that it was he, 20 years old at time and at the start of his career, who was actually influenced by her. 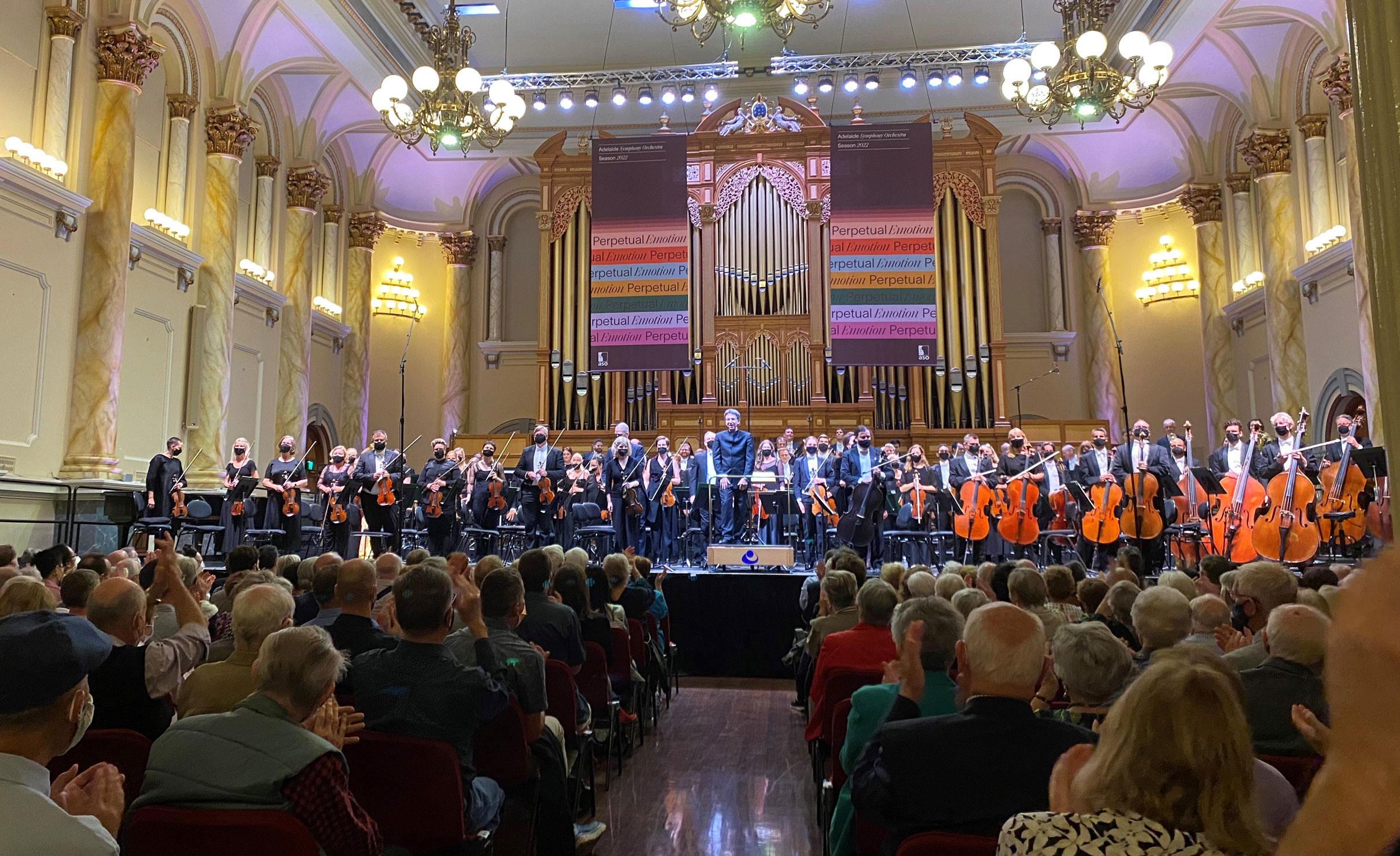 The ASO perform Jubilation before an appreciative audience at Adelaide Town Hall.

Then it was to Mahler. So much has to go right in performance in order to capture the apocalyptic vision of his Fifth Symphony. The ASO so infrequently play him at all that one felt nerves of trepidation – but not half as much as the players, of course, for whom this represents some of the most difficult orchestral music ever written.

And did it contain everything in the world? From bleakest depths to the most ecstatic heights, yes it did. The playing was pretty darned wonderful, too. Blemishes were minor in comparison with the sheer force and commitment of this performance.

Only Mahler could begin a symphony with a funeral march, and follow it up with a storm to be played “with the greatest vehemence” – as he indicates in the score. Typically, that funeral march, announced in the trumpet, is played with halting ceremonial gravitas. But Aadland chose to be different, giving it bursts of compressed energy and genuine menace. The effect was startling. The only quibble was that the soulful cello theme, which slowly emerges, felt slower than perhaps it should, and momentum sometimes felt a bit lacking in other quieter moments of the symphony.

Nevertheless, the contrasts were electrifying. The cry of horns, the blast of brass and the scream of violins in the storm movement sent shivers down one’s spine.

Along with due praises to Aadland, credit goes to principal horn player Adrian Uren, who so adeptly and flawlessly took the crucial solo horn part in the Scherzo – casually walking up to the front of the stage like a concerto soloist for this third movement. Fair to say, though, that all players rose magnificently to the occasion. It was great to see them let rip, and their fearless playing was an inspiration.

Speaking for myself, this was the best therapy I could imagine in these days of paralysing uncertainty. Looking around at the audience, many of whom were cheering at the top of their voices by the end, I think they were all feeling similarly.

Mahler is a composer who stands at the precipice and dares to look across. Yes, we could probably use more of his vision right now.