What is the role that made you fall in love with musicals?

I was already in love with movie musicals, but within my first few months of high school I got into the school production of Joseph and the Amazing Technicolour Dreamcoat. I was cast as one of Joseph’s brothers (it was an all-girl school!) ­– I was Asher and I had one solo line and it was the biggest thrill to sing it.

Joseph is a fantastically fun show – it plays with different musical genres, and is a pure exercise in storytelling through song and dance and comedy. The cast was mostly made up of the more senior girls at my school, and they were so wonderfully encouraging and talented. Their kindness and camaraderie was definitely one of the reasons I fell in love with performing in musicals.

The role that fast-tracked your career? 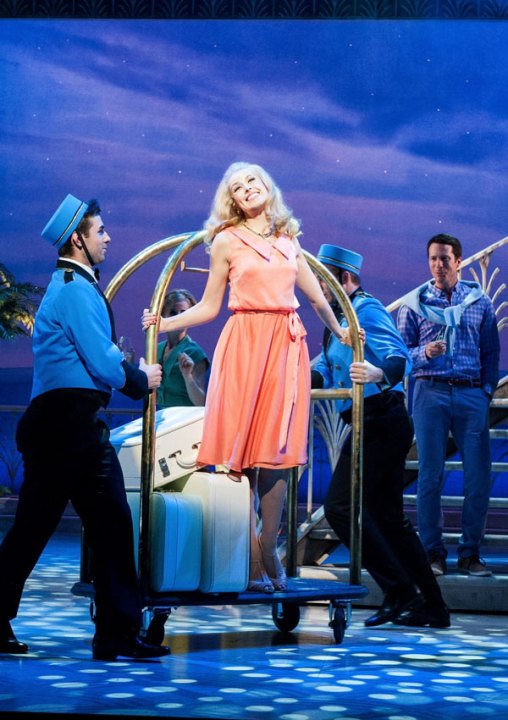 Amy in Dirty Rotten Scoundrels: ‘It was my first leading role in a show in Sydney’. Photo: Kurt Sneddon

Christine Colgate in Dirty Rotten Scoundrels, a role I played twice. It gave me a different boost each time. The first time I was originally cast as a supporting character but the lead actress was offered a West End role at the same time and dropped out, so director Roger Hodgman decided to bump me up. Being a production company show, it was a whirlwind rehearsal and performance experience, but it was the most incredible, steep and rewarding learning curve and taught me so much.

When I auditioned for the role again four years later, I had had a few years of experience behind me and was determined to prove myself and make a mark with it. Thankfully, I won over the producers and I got my chance. It was my first leading role in a show in Sydney, and it was a really strong introduction to the industry. The show was a real favourite with audiences and it means a lot to be associated with it.

Your most rewarding role?

Playing Maria in The Sound of Music was my dream come true.

I had always hoped the opportunity to audition would come around, and when I heard the show was coming, I set my sights on making sure I was in with a chance. To that point, I’d established myself as mostly a musical theatre “belter”, so I did a lot of work to round out my voice to a more Rodgers and Hammerstein-friendly sound.

The character of Maria always made so much sense to me – she’s playful, funny, optimistic, energetic and headstrong. And playing her was completely joyous. Connecting with those amazing children every show was rewarding; we were on a little journey together every night and had so much trust in each other. My heart was just so happy going to work every day to sing that sublime score. 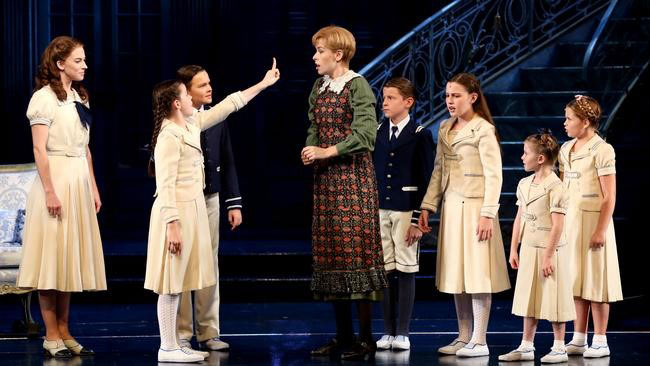 The role that taught you an important life lesson?

Reza in Once. I grew up playing the violin but reached a fork in the road at university where I realised I wanted to be an actor and singer more than a violinist. It felt like I had to break up with the violin. When Once came around, I started practising again, and in the course of rehearsals I was reintroduced to what I loved most about playing – playing with other people.

It was such a rewarding show. I made lasting friendships and reconnected to the essence of why violin – and music – had been so much a part of my life. Redefining my musicianship as something to share and revel in, not compete with, made all the difference. I’ve been carrying that ethos with me ever since.

A role that was inspirational?

Dusty Springfield in Dusty. Her dogged determination to create the sound she wanted, love who she wanted – it brought her a lot of pain but my gosh did she leave a legacy. It was intimidating playing someone with such an iconic sound, but surrounding myself in her music and her influences was incredibly rewarding and continues to inspire my music tastes and singing.

What makes a Broadway hit?

Something special happens when the right story and songs are written at the right time with the right team: the choreography and the staging work together seamlessly to tell the story of the work, and the performers are inspired to contribute their best.

I think a common thread is a bravery and hopefulness in the making of it – that a certain story has to be told no matter what. There can’t be anything cynical or manufactured to “get bums on seats”. It’s the something special that makes your hairs stand on end in a great show. Great collaboration has that effect, and great musicals rely on it.

You’re set to perform with the Adelaide Symphony Orchestra in its Festival of Orchestra concert A Night on Broadway at Adelaide Showground on December 1 – what are you most looking forward to about that?

Singing with a symphony orchestra is the most thrilling experience. The arrangements are fuller and more detailed, and the sheer amount of wonderful musicians on stage is far more than what you might get in a traditional Broadway show. I can’t wait to work with the ASO to bring these wonderful songs to life. And under the stars? That’s a bit romantic, isn’t it?

Which song are you especially excited to sing at the concert?

I’m lucky enough to be singing songs from not only the recent past, but absolute classics.  “Don’t Rain On My Parade” is an absolute favourite of mine. It’s so dynamic, powerful and uplifting. We’ll all feel like we can take on the world after that one!

Into the Woods: I played in the orchestra for an amateur production when I was a teenager and I’ve loved it ever since. It’s clever and funny and heartbreaking, and so musically interesting.

Once: Admittedly I’ve not seen Once, but being in it was one of my favourite experiences on stage, and the effect on audiences was so special. I’ve only ever heard raves about the production from anyone that saw it on Broadway, the West End or in Melbourne.

Follies: Follies was my first ever show. I’ve since seen the National Theatre production on screen (and I highly recommend it). The magic of Follies is that it speaks to performers of every discipline and age. The hope of young talent, the grit required of the seasoned veterans, the magic of reconnecting to your past triumphs, the pain of adult realities.

The Sound of Music: The film was what captured me as a child, but the musical came first. It’s only right that I include it on this list. (Note: the clip below features Lehpamer as Maria.)

Dirty Rotten Scoundrels: This has gorgeous production numbers and hilarious characters. It’s a fantastic example of film-to-stage adaptation done well. I love composer David Yazbek’s work – The Band’s Visit is one of his more recent shows and I can’t wait to see it one day.

Amy Lehpamer stars in A Night on Broadway on December 1 at the Adelaide Showground. It is part of the Adelaide Symphony Orchestra’s Festival of Orchestra – a series of outdoor concerts from November 24 until December 4.