If not for COVID-19, the ASQ would currently be rehearsing for a national tour – one of three planned for 2020. Instead, like all live performers, the quartet members have had to spend most of the year so far figuring out other ways to “make ourselves useful and get our music out there”, says cellist Sharon Grigoryan.

In April, they introduced Australian Anthology, a project involving the release each month on digital platforms of new recordings by contemporary composers. Now, they’re launching a digital streaming subscription-based platform ASQ Live + On Demand, which kicks off on August 2 with the first of eight weekly live-streamed webisodes titled ASQ Live at UKARIA.

Grigoryan says the quartet – whose home base is the Elder Conservatorium of Music at the University of Adelaide – wanted to make the series different to other livestreamed concerts.

“It’s going to be presented more like a TV episode,” she says.

“The centrepiece will be the string quartet performing, but we thought it would be a nice touch to have a presenter talking to the musicians to get to know the people behind the performance.”

For the host, they chose Adelaide-born Johanna Allen, a writer, performer and presenter whose career spans opera, cabaret and musical theatre, while cinematographer Maxx Corkindale has been engaged as director of photography to ensure the streams look slick.

Each webisode of ASQ Live at UKARIA will begin with a short “lifestyle segment” in which Allen interviews Grigoryan and fellow quartet members Dale Bartltrop, Stephen King and Francesca Hiew at their homes or favourite spots in Adelaide to find out more about their lives behind the scenes.

Allen says the project is a chance to explore art from a human perspective: “We get a joyous marriage – music from one of Australia’s most renowned classical acts, intertwined with who they are as people.”

The segment will also see the musicians visiting different parts of Adelaide and South Australia to speak with guest “makers and shakers”, ranging from a street artist to a restaurant chef and UKARIA’s head gardener.

Grigoryan – who has been filmed talking with luthier Jim Redgate in Port Noarlunga and food icon Maggie Beer in the Barossa – says the guests are all creative in different ways.

“We didn’t necessarily want to talk classical music with these guys; we just wanted to send out the message that music really is a universal language and you don’t have to be a classical musician to understand it and enjoy it.

“Also, if the guest list seems a little bit random, we did that on purpose for variety. We wanted to interview people we have a personal connection with … we wanted to bring the viewer into their world.”

Each webisode is around 45 minutes, with the centrepiece being the livestream of the ASQ performing one complete work before a real audience in the UKARIA concert hall.

Acclaimed pianist Konstantin Shamray will also join the quartet on August 16 for a performance of Dvořák’s Piano Quintet. 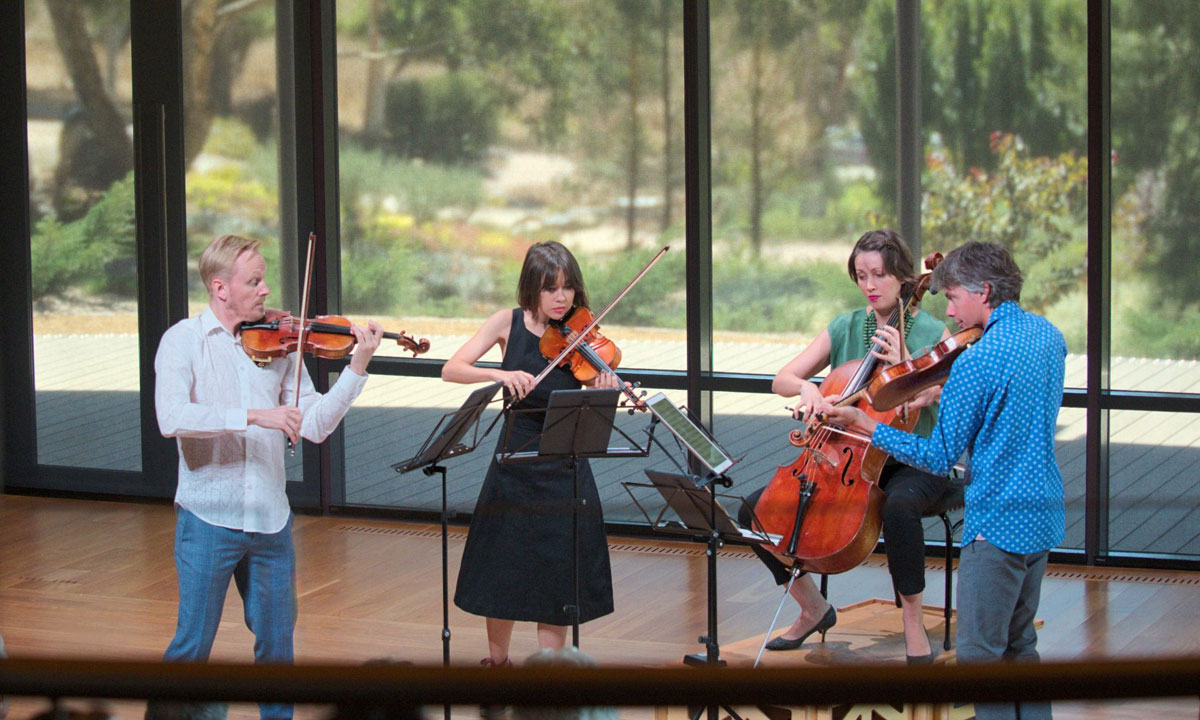 Grigoryan says the musicians are thrilled that the easing of COVID-19 restrictions means they can have a small audience in the concert hall, which will imbue the streamed performances with the “warmth and personality” of a live concert.

“That just makes the world of difference for us as performers… it will add a particular energy to the performance, kind of like having a studio audience.”

ASQ Live at UKARIA is scheduled to run until September 20, but if it proves successful the quartet may look at presenting more livestreamed concerts.

Performances of ASQ Live at UKARIA will begin at 3pm on August 2, with the full musical program and subscription details on the ASQ website.