She’s performed in many different places over her music career – from backyard sessions, to bars, barns, libraries, and festivals including WOMADelaide and Nashville’s Americana Festival – but this was for a uniquely coronavirus-era gig.

A friend in California’s Napa Valley was organising a virtual happy hour for the employees of the winery where he works, and asked if Menhennett would play the music via a live link.

“I can’t imagine any other circumstances where I would have been playing to a happy hour of work colleagues in the States,” she says of the small ray of light amid the COVID-19 pandemic that has quashed her main source of income.

When the restrictions on public gatherings began, Menhennett – whose musical style spans soul, roots and alt-country – immediately lost around six gigs booked for the coming weeks, from weddings to a house concert and a show with her band at the Wheatsheaf Hotel.

“Everyone I know who is fully reliant on music had a mini breakdown wondering what they will do for the foreseeable future in terms of income,” she says.

“After putting up a Facebook post on the weekend to see if there’s any interest in online concerts and teaching, I was quite overwhelmed by the response.”

She was booked by Bellwether Wines in the Coonawarra to perform a livestreamed gig on Friday night, and is now exploring the best platform to livestream more performances (keep an eye on her Facebook for details).

A former teacher at the Guitar Academy and winner of the national Telstra Road to Discovery award for songwriting, Menhennett is also offering Skype lessons in guitar and ukulele playing and songwriting.

“There’s so many aspects to being able to create a song,” she says of the writing.

“Just before COVID-19 I’d been invited to do workshops in high schools through Carclew – I had already started doing it at Murray Bridge with Taasha Coates [of The Audreys] – and that highlighted to me what I know about songwriting and what I could teach.”

Other South Australian musicians are also adapting, including multi-instrumentalist Adam Page, who last Tuesday livestreamed an Improvisation for Isolation concert and is planning to present another one this coming week, and country singer Beccy Cole, who streamed a Live From My Place interactive online concert last weekend with Libby O’Donovan and Kelly Brouhaha.

The initiatives are a win-win – providing potential income for artists, but also helping relieve the boredom and anxiety of others struggling with social distancing and isolation. 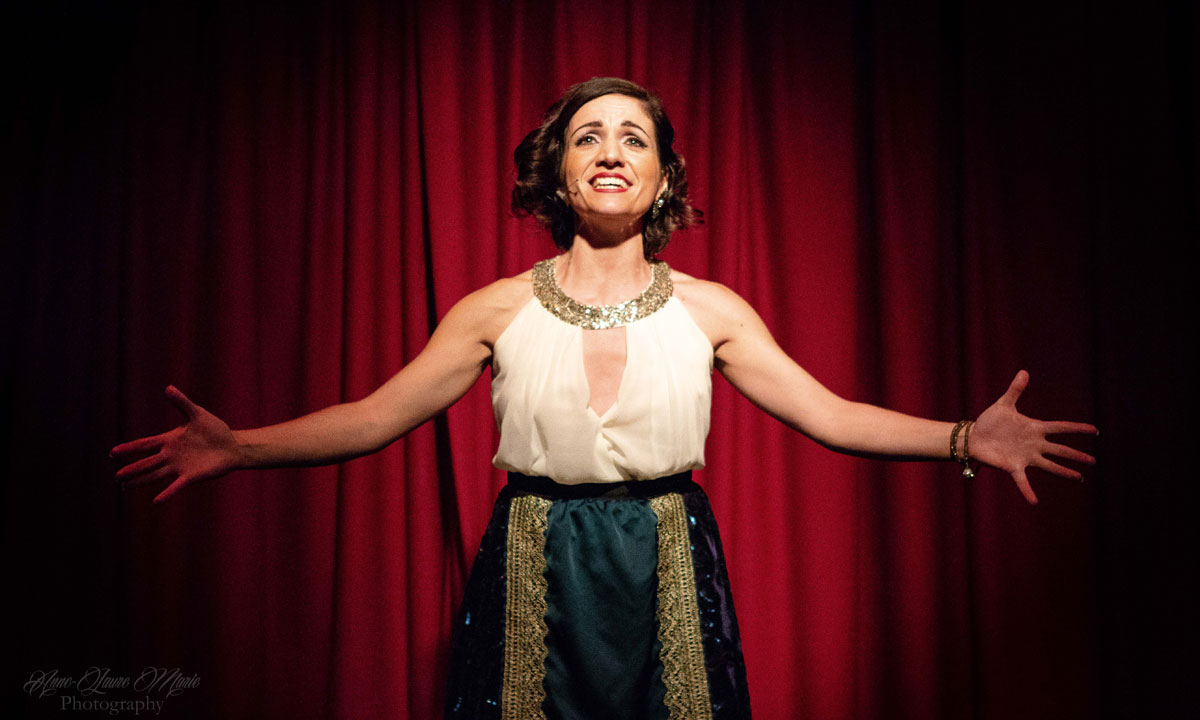 One singer who is quickly mastering the art of live-streamed performance is cabaret artist Michaela Burger, who launched her online Sequin Sessions last Saturday on the streaming platform Twitch, Facebook and YouTube.

“It worked and it was a really happy moment,” she says of the first session.

“It was supposed to go for an hour but it went for three hours accidentally because a lot of our friends overseas tuned in.

“It was so much fun and it was a really special moment to feel connected to people because you can see them jumping on as you go … it did open up this whole other world.”

SA-born Burger is a full-time singer, songwriter and actor who spends a lot of time touring and travelling between Adelaide and Melbourne.

For her, the COVID-19 crisis came at the worst possible time: after a quiet few months she had just finished performing A Migrant’s Son at the Adelaide Fringe and was preparing for back-to-back bookings through until June, including a regional tour of A Migrant’s Son, performances of her Helpmann-nominated show Exposing Edith, and a guest appearance at the (now-cancelled) Adelaide Cabaret Festival.

I need to do what I love doing

“In the first few days [of the COVID-19 restrictions], I had about 17 shows cancelled… on top of that I’m not sure what will happen for the rest of the year because I have about another 30 shows booked.

“I knew financially that this was really going to hurt… I also thought, ‘What am I going to do for three months?’.”

She knew she had to quickly find an alternative stream of income. After researching the available platforms for online streaming, she opted for Twitch, where people who tune in are invited to make a donation.

About 150 listened during her first Sequin Session, and she says they were very generous.

“I was really blown away by the response… people were amazing and I think they saw the value of it.

“It’s also really important for me as an artist to connect with people. I need to do what I love doing and what I feel I was put here to do.”

Burger plans to present a livestreamed Sequin Session each Saturday, from 7.30pm, and says they will include pop, jazz and musical theatre songs, plus original music – “I even did some country by request on Saturday”. She is also doing a livestreamed Nursery Rhyme Time for Toddlers at 10.30am on Wednesdays.

In addition, Arts Centre Melbourne this month released a livestream performance of Exposing Edith which is available to view on YouTube.

Burger says being homebound will motivate her to work on a new show she has had in mind for a while, and she thinks other singers and musicians will also boost their creative output.

“Because of isolation I’m expecting there will be some really transformative art that’s created and which comes from a very deep place… when you’re in isolation, you really connect to the human condition.” 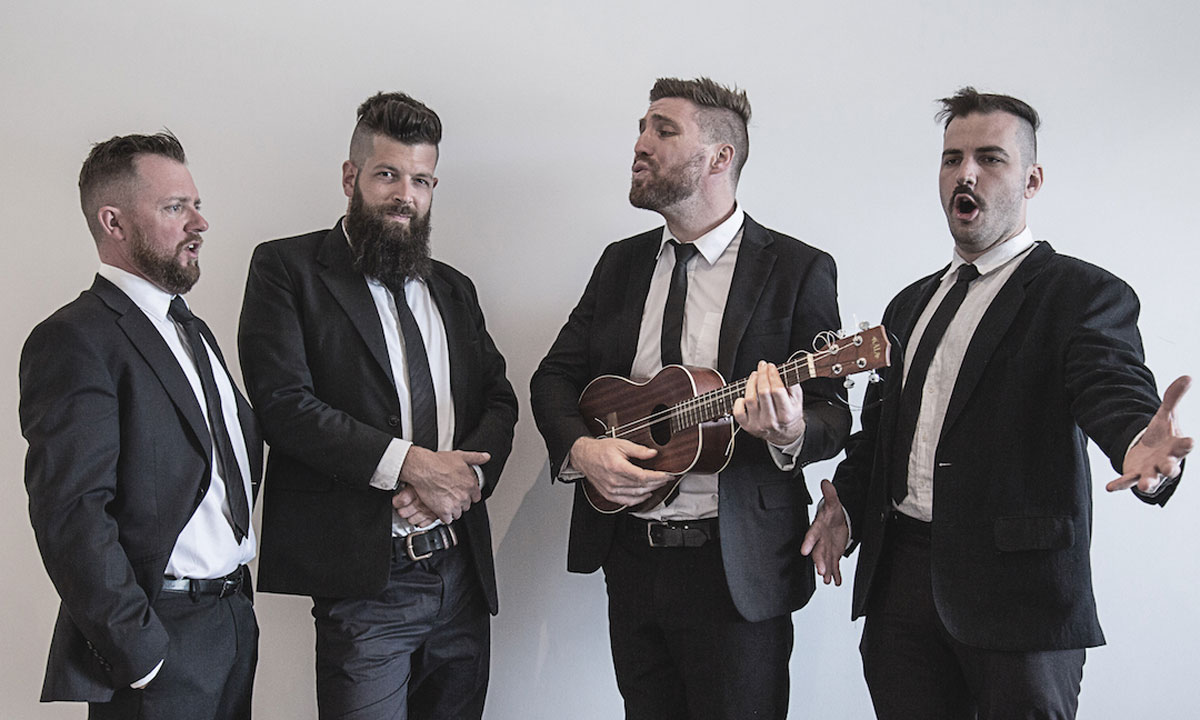 “I guess all we can say is that it looks like there are some bloody tough times ahead for all of us,” began the Ukulele Death Squad’s COVID-19 Facebook announcement last week explaining the cancellation of all its upcoming gigs.

The Adelaide-based Squad – which promotes to itself as “the world’s most dangerous ukulele group” – had just completed a successful Fringe season, including a closing weekend show at the Regal Theatre, before the first new rules restricting large gatherings of people were introduced.

“We were lucky to get that through,” says lead ukulele player Benjamin Roberts. “That will be our last stream of income from live performance for the foreseeable future.”

They’ve been forced to cancel the launch of their new eight-track album, which was to take place at the group’s Ukulele Death Fest at Kuitpo in May, as well as interstate events and a planned tour to China in June-July. The closure of the Guitar Academy means Roberts has also lost his job teaching ukulele.

In response, the Squad are going online with livestreams and lessons, including tutorials from the newly released Ukulele Death Squad Official Song Book, which features the chords, tabs and lyrics for about 15 of their songs.

He says the Squad plans to still release its album, at least digitally. Meanwhile, he is experimenting with livestreaming solo performances on Facebook with a link so people can make a donation.

“I know finances for people are tough at the moment but if people are enjoying the performance and want to support us they can donate.

“A lot of artists can’t perform live so they’re looking to be creative and still perform and share their music.

“I’ve last night also just put up a solo EP [Live at Chapel Lane] that I recorded and I never thought would be released but getting that out on a solo platform is a way to generate some sort of income.” 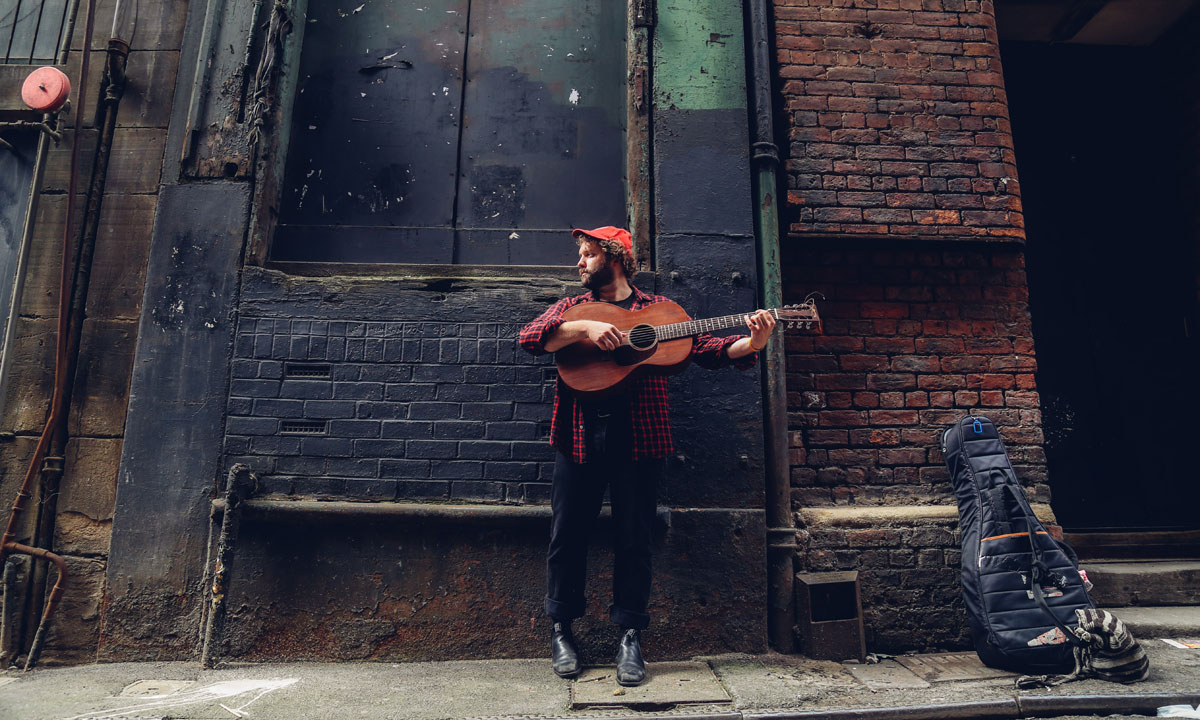 Tom West was in New York, part way through a six-month tour that was to include performing at the South by Southwest festival in Austin, when he realised the world was turning topsy-turvy.

“It was weird because people there weren’t worried and that was what freaked me out … I like reading the news, I do it more than most people, so I was keeping up to date with what was happening in Europe [in terms of COVID-19],” he says.

“But life in New York was going on as normal – everyone was still catching the subway, the restaurants were still packed … it was just getting to the point where stuff was starting to be cancelled and I thought, ‘I’ve got to get out’. I caught a flight the next day.”

He arrived home on the Sunday morning before the mandatory 14-day isolation period was introduced for people arriving in Australia from overseas, but has isolated himself at home anyway as a precaution.

West – who plays contemporary folk music; “melodic, lyrical, poppy songs – has been travelling between Australia and the US for the past two years, touring extensively with small-venue gigs.

He’s missed out on about three months’ booked work as a result of the COVID-19 pandemic, but livestreamed a set on Facebook last week in place of a show he was supposed to be performing in Chicago and is planning to do more.

West says monetised livestreamed concerts are already fairly common in the US, although at this stage he isn’t looking to earn money from his efforts.

“It’s more about engaging with people who are already following me and exploring that environment – it’s a pretty new ballgame right across the board.”

While West was in the US he finished working on a new album, which he now hopes to release in June. Like Michaela Burger, he believes enforced isolation will lead to a wave of creativity among musicians.

“I think it’s inevitable. As soon as I got home I started playing around.

“It’s like a reflex – that act of grabbing your guitar or keyboard or pen and paper; when you’re a working musician it’s instinctual.”

Meanwhile, he says the best way music lovers can support music makers is by listening to their music, supporting them on social media and sharing their content.

“All that stuff is really priceless, especially for people in a similar situation to me and my colleagues who aren’t household names.”

Kelly Menhennett’s contact details, and links to music from her two albums, Small Dreams and World of Mine, can be found on her website. Stay tuned to Facebook for updates about livestreamed shows.

Michaela Burger’s official website and Facebook page have details of her upcoming livestreamed performances. She recommends that other singers and musicians keen to explore livestreaming should check out platforms such as Streamlabs, OBS (Open Broadcaster Software) and Twitch.

Links for downloading and streaming Tom West’s music can be found on his website, with his livestreamed performance available to view on Facebook.

Check out the Ukulele Death Squad’s Facebook page for latest livestreamed performances and play-along video tutorials, and the group’s official website to buy or share their music.

More advice for musicians looking for ways to earn money during the COVID-19 pandemic – and how fans can support them – can be found in this CityMag article.