The local variation was created by State Opera artistic director Stuart Maunder for Opera Queensland in 2011, and later presented in 2017 by New Zealand Opera. Here we see it supported by the State Opera Chorus and a pared-back Adelaide Symphony Orchestra, conducted by Simon Kenway.

The Mikado’s narrative and temper offer sharp digs at society, pompous bureaucracy, and the difficulties of wending one’s way through the unpredictable territory where love and affairs of state collide. For many, this contemporary version will be their introduction to the G&S repertoire, a fact of which Maunder is keenly aware.

The story’s setting in Japan circa-1900 might risk charges of Western othering and appropriation. Even so, the essential weight of the satirical depiction is about the follies of state officialdom anywhere, including Gilbert and Sullivan’s own patch, the UK. Its plot is as convoluted as politics itself.

Simone Romaniuk’s stage design is spot-on and her costumes very engaging.  The schoolgirls’ appearance is a melange of Tokyo’s Harajuku district styling and Hello Kitty; all pink frocks and a hint of Shirley Temple. You might also think Studio Ghibli animé, given its element of caricature. If that’s a bit of a shock, one just has to suspend disbelief for the sake of the fun.

The entrance of Ko-Ko (New Zealand actor Byron Coll) in full regalia is a triumph of Romaniuk’s imagination, especially in its contrast with the nature of his character. 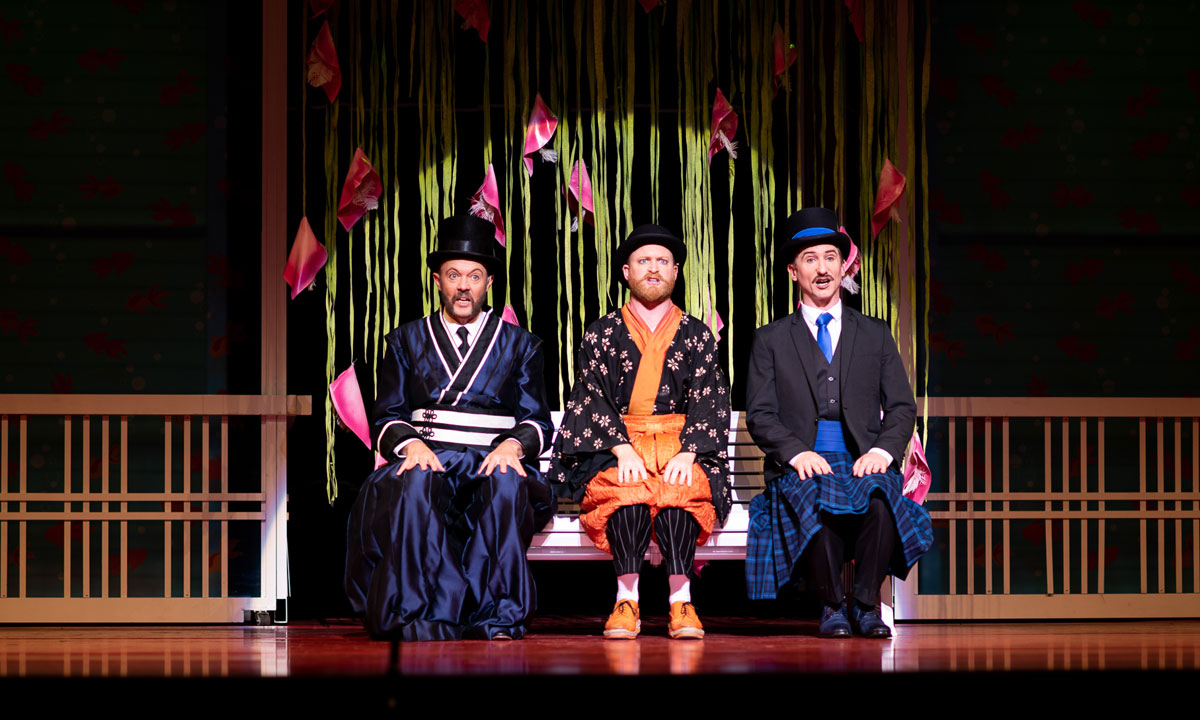 Coll is a fine comic foil, limber in panto style. Why is he played so Scottish? Who cares? He carries off the role delightfully, complete with pratfalls and clowning sensibilities.

Tenor Dominic Walsh is a fine Nanki Poo, the Mikado’s “wandering minstrel” son returning to save his friend Ko-Ko from execution for flirting and to claim his beloved Yum-Yum (Amelia Berry). He discovers that Ko-Ko has actually been made Lord High Executioner, but with awful terms and conditions. As they say, what could go wrong?

The voices are delightful, even if clearer diction or sound production would have allowed better appreciation of the modernised lyrics’ wit. Pelham Andrews (bass) is suitably grave and vain as the Mikado, and Andrew Collis (as Pooh-Bah) and Nicholas Cannon (as (Pish-Tush) both excel. Elizabeth Campbell effectively plays the Mikado’s would-be daughter-in-law, Katisha, as a Dame Edna type with a vicious streak.

The stage design and costuming are a highlight of this quirky new production of The Mikado. Photo: Soda Street Productions

In an imaginative marriage of East and West, old and new, there are quirky but effective insertions of contemporary references such as CDs and mobile phones. Updated songs, especially “I Got a Little List” and “Let the Punishment Fit the Crime”, contain telling and much-appreciated quips, including references to poor driving, particular politicians, and “ramping at the RAH”.

What would a love story like this be without uncertainty, even danger. Does there have to be an execution? A wedding?

The Mikado has something for audiences who already know the show and are keen to see the classic operetta adapted. School music teachers, too, might still be able to gather up students to see this (PG) production for its humour and singing and excellent staging. Others should simply go for the pleasure of a well-directed and performed experience of something new.

State Opera SA is presenting The Mikado at the Festival Theatre again on November 15, 16, 20 and 23. It is running concurrently with Madama Butterfly.