Adelaide Symphony Orchestra has embraced the world of virtual reality so audiences can experience what it’s like to be on stage with the conductor and musicians during a concert performance.

The orchestra has partnered with Adelaide-based Jumpgate Virtual Reality, which recorded its Classics Unwrapped concert conducted by Guy Noble at the Town Hall in May.

Members of the public will have the opportunity to don virtual-reality headsets and experience the result at five lunchtime sessions next week in the foyer of the Santos building in the city.

“We’ve had a number of board members and many of our players and friends of the ASO experience it, and every single person has had the same reaction – they are all blown away, because it is such an immersive thing,” says ASO chief executive Vincent Ciccarello.

“Just to be surrounded by all the instruments, to have the conductor standing in front of you, to be able to turn your head and focus on any musician while the orchestra is playing.

“You’re basically sitting in the position of the principal viola right in front of the conductor, but can turn your head 360 degrees.” 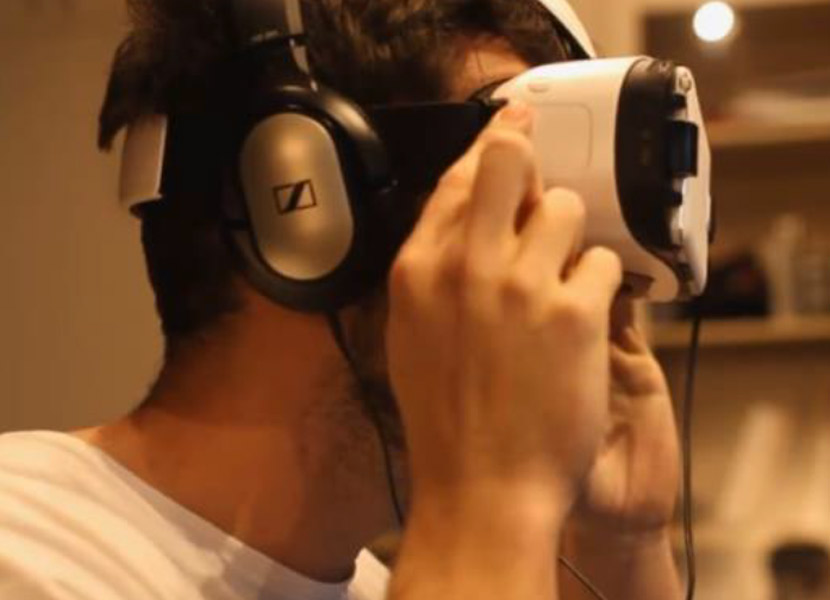 Jumpgate previously worked with the Seraphim Trio on a virtual-reality concert series that could be viewed through a smartphone app. The technology was first demonstrated in December when Seraphim launched The Beethoven Trios series in Melbourne, with the concerts also available online for personal computer-based virtual-reality headsets such as Oculus Rift.

Following the Seraphim Trio project, Jumpgate approached the ASO to gauge its interest in a pilot project applying the technology to an orchestral setting.

Ciccarello says while there is a novelty aspect to the experience, the orchestra believes it can also foster a deeper level of audience engagement.

“We see it as a really exciting audience development initiative.

“We see it as an opportunity to introduce people to the world of orchestral music mediated by the latest technology. Given that technology is playing such an important role in the delivery of all forms of entertainment, we want to embrace that.”

He said the virtual-reality technology could also be used in music education, with students able to experience all aspects of a concert through the headsets, while being directed to pay attention to particular features such as individual instruments or themes.

The Classics Unwrapped concert that was the subject of the pilot project featured more than 60 musicians on the Adelaide Town Hall stage performing works by Sibelius, Strauss, Hayden, Mahler and Australian contemporary classical music composer Carl Vine. Filming was surprisingly unobtrusive, with a small camera tree comprising 14 GoPro cameras placed in front of conductor Guy Noble, plus another camera at the front of the stage so Noble’s commentary could be spliced in.

Ciccarello says the ASO intends to offer more virtual-reality concert experiences in the future, one of which may result from the next Classics Unwrapped concert on August 12.

“This is what we see as our first step along this path and we’re really excited to develop it as a fully fledged platform that’s available as an app with a wide range of repertoire available.”

Members of the public can experience the Classics Unwrapped Virtuality Concert Series between noon and 2pm, from Monday, July 20, until Friday, July 24, in the Santos foyer (60 Flinders Street, Adelaide).

There will be six headsets available each day, with the program comprising Sibelius – Finlandia (Monday), Strauss – On the Beautiful Blue Danube (Tuesday), Carl Vine – Suite from the Tempest: Overture (Wednesday), Haydn – Symphony No 83 in G minor – Allegro Spiritoso (Thursday) and Mahler – Blumine, from Symphony No 1 in D Major (Friday).