A few things have changed in the Barossa. With international tourism only just recovering after a two-year hiatus, the region now seems to be in recovery mode. This typically bustling wine and food destination is much quieter than it was pre-pandemic, with many cellar doors and eateries having to adjust their offering or opening hours to suit a more local visitor market. But Barossans are a resilient bunch and there have been a string of new venues, cellar doors and eateries opening in the hope of attracting a new wave of punters.

Otherness Wine Bar in Angaston is offering an alternative to the traditional cellar door, and Culture Shock Provisions in the main street of Tanunda serves up Euro-style snacks and drinks to those looking for an alternative kind of experience. Schubert Estate will open its shiny new multi-million-dollar cellar door in Marananga later this year, and last year’s State Government injection of tourism funding in the region will see the refurbishment of cellar doors at Hart of the Barossa, Schild Estate, Lambert Estate and Seppeltsfield.

But it’s not just new or improved venues that will entice a fresh set of faces to the region. When the Artisans of the Barossa moved out of their former home base in Vine Vale (just outside Tanunda) in early 2019, it left a vacancy for another wine enterprise to move into the neighbourhood. Enter Calabria Family Wines. Already an established brand from the Riverina region in New South Wales that has been producing wines from their Barossa vineyards since 2010, they decided to make their brand presence more permanent. As part of the acquisition, they also decided to maintain the on-site partnership with Harvest Kitchen.

And we should be glad they did.

Today’s lunch happened by chance – or rather, by necessity. Part of the change for many Barossa venues has been to curate their operations around visitation and it seems that mid-week lunches are a casualty. Not at Harvest. The venue is open for lunch seven days a week (and dinner on Saturdays). A quick Google followed by a last-minute Tuesday reservation and here we are, seated in a casual venue with an indoor-outdoor feel that makes the most of panoramic views over the Calabria vineyards and across the Barossa.

The Harvest menu is all about options. First, you’ll need to decide whether to let the kitchen team feed you “like a Barossan” for $65 per person, or select a five-course approach – one each from five sections that feature three choices – called “Feed Me Eden” at $55 a head. I’ve seen menus with individual mains listed for more, and when the shared dishes begin to land the value here is even more astonishing.

Alongside wholemeal sourdough with lashings of whipped and tasty cultured butter sits a plate of Prosciutto di Parma, arranged on a plate beneath shaved fennel and scattered micro-greens, but it’s slices of pickled celery that steal the show. Yes, celery. I usually consider this a bit of a waste of a vegetable, with its watery nothingness rarely adding anything to a dish besides crunch, but here my prejudice is proven wrong. This pickle is delicious, flavoursome, tart and crunchy, too, of course, with a fresh light bitterness that is a solid accompaniment to the prosciutto. 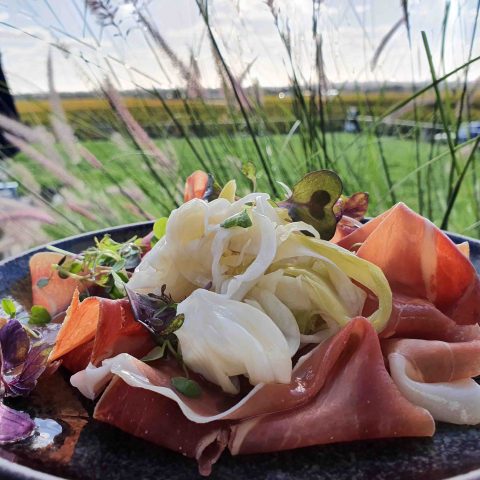 A jumbled assortment of broccoli florets with various bits arrives next. It’s not much to look at, but the taste tells an entirely different story. Barely cooked, each floret soaks up a white bean puree that is more than just a blended can of beans. It’s creamy yet retains some texture and has a smoked, earthy flavour with just the right balance of salt. Sweetness comes thanks to a generous proportion of dried cranberries plus scattered fresh pomegranate with its signature pop of sweet acid in each bite. 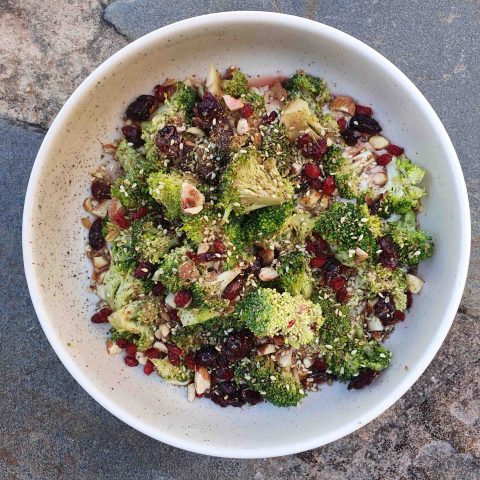 The star of today’s lunch (aside from the welcoming staff) is pork that is sourced from Gumshire – a producer located just down the road in Keyneton. Based on taste, flavour and texture, this Hampshire pig clearly led a comfortable life. A succulent scotch fillet is presented in a katsu (schnitzel) style, sliced, and splayed over a creamy bed of mash, but this is no average pub-standard dish. Barbecued quince has been used to create a chunky glaze that coats the fillet; it’s ever so slightly sweet, complementing the meat rather than competing. A side of julienned celeriac coated in a light and tangy creamy sauce acts as a salad and the addition of mung beans and toasted sesame complete the flavour profile of this unpretentious but utterly delicious dish. 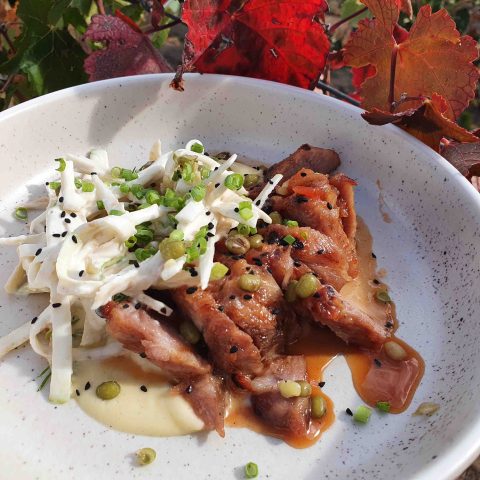 Harvest’s pork dish is the standout at our reviewer’s lunch. Supplied image

Another neighbour is Hutton Vale, and their lamb is seen on menus across the Barossa and the country for good reason. These are are producers who know that despite the eventual necessary fate of their stock, their care and treatment always shines through on the plate. Slow cooked and pulled, the Harvest kitchen has given this cut the appropriate level of care and treatment. Unfussed, the plate starts with a pool of pungent, savoury and smoky jus; the lamb is piled on top alongside a stack of pickled red cabbage there to provide freshness and crunch to this otherwise meaty and expectedly salty plate.

Despite the temptation from a list of desserts (that you can add for $12), we decide it’s time to call today’s lunch quits. For starters, we’re suitably full. And it is a Tuesday, after all.

Unashamedly Barossan, with chefs who respect produce and have a firm grasp on balance and flavours, Harvest Kitchen is one of those places you’ll want to revisit, for the service, the wine and value, if not to work your way through the rest of the Feed Me Eden menu.