You know those three initials that make up the well-known red blend G,S and M? There’s the Grenache that is everyone’s darling grape of the moment and the Shiraz that is the state’s most popular red variety by a million miles. And then there’s the M.

If there was a prize for the best underdog in the wine biz, dear old M wins hands down.

For most of us, it’s only ever been the bit player in the show, usually in the most minor of proportions. Rarely does it even appear on its own as a single varietal style, so getting to know this eccentric fellow is somewhat of a mystery.

Its name is the first step in its identity crisis, with three main variations in play. Those leaning towards all things French will call it Mourvedre (pronounced something like “moore-ved” – excuse my French) while those with a more Spanish view might like it as Monastrell.

In the Barossa, especially, it’s widely known as Mataro.

And it is there that a love affair with this grape has stepped up a notch in the past few years, with several winemakers bringing it to the stage in a leading role.

It’s about time. The variety has quite some history, being among the hundreds of cuttings brought to Australia by James Busby in the 1830s, initially to NSW before being distributed to Adelaide’s Botanic Garden where clippings were taken and spread into the burgeoning agricultural lands of the state. Mataro, as he called it, did plenty of time mainly as a team player in the flourishing fortified business, right up until the mid to late 20th century.

It’s considered by many Barossa insiders to be one of the region’s “best-kept secrets”. We’ve been drinking it forever, yes in those Tawny fortifieds, probably in a splash of old-fashioned Orlando Carrington Blush sparkling, if that was your thing, and more likely within a lot of Shiraz where it has been often used in small proportions to provide some tannin and spice characters to otherwise excessively fruit-forward wines.

Mataro’s quite different varietal personality is what attracts supporters like Angus Wardlaw from Brothers at War wines, who works up a very smart iteration from an 80-year-old vineyard in the Eden Valley.

“It gives us a diversity beyond just Shiraz and Grenache,” Wardlaw says. “It has an earthy savouriness to it which is quite a different flavour profile to other Barossa varieties.”

Sourcing that fruit from the Eden Valley is a feat in itself, he says, and being such an old vineyard makes it even more special.

“We wanted to showcase those amazing old vines – it’s quite rare to have such old Mataro from the Eden Valley.

“There’s not much of it out there.”

Tim Smith, based in the Vine Vale district of the Barossa, has been championing varietal Mataro since 2008, mainly sourcing his from three main grower vineyards across the region, the oldest of which he believes is around 140 years old.

“It should be as much a hero in the Barossa as Shiraz and Grenache,” Smith says.

He’s learned a lot about the grape since working with it solo, especially given it’s the latest ripening of the traditional Barossa varieties. This can lead to picking decisions erring towards too green or too ripe, both of which can lead to horrible results.

What you have to learn to love is Mataro’s unique sensory characters, he says, often referred to as meaty, gamey, and “funky”. Its spice notes are exotic, in his terms like Chinese Five Spice.

“It’s no mystery for me that it goes really well with Peking Duck. I always describe it as like walking through Chinatown on a summer’s night,” Smith says.

It’s also a lot about its structural feel, melding both acidity and its unique tannin profile which is why it comes into its own in many GSM blends.

Smith does his own variation on this theme, not surprising given his passion for Mataro, which he brings to the fore in his Tim Smith Wines M.G.S. which is a 60:20:20 proportional blend. It’s a terrific starting point for anyone keen to first explore the variety.

What is clear is that Mataro is a variety that is made by creative winemakers keen to tap into the Barossa’s history, driven to craft a unique style still linked to the region’s traditions. And it’s not just about market forces.

Dean Hewitson is, arguably, the best-known winemaker attached to the variety, having acquired what is considered the oldest working Mataro vineyard in the world, planted in 1853 in the Rowland Flat district.

There is one slight hitch here in that he uses the French moniker Mourvedre for his grape naming convention – although in his signature offering that only appears in the small print on the bottle’s back label. The presentation here is all about the Old Garden vineyard in Rowland Flat.

“That one little hectare of the Valley can tell the story of the whole Barossa,” Hewitson says. “It’s seen it all; it’s been part of it all.”

He recalls being told by a member of the Koch family growers that the variety went into Carrington Blush: high cropped, low colour, low Baume, perfect for the style. Of course, it was part of a long and celebrated fortified history, eventually being blended back and forth in red wines that were probably classified as “Burgundy Red” rather than “Claret Red”, until he picked up the vineyard in 1998 to make more of a star of the resource.

Not only do the vines reflect the region’s history, he says, but he also loves that they tell the entire story of each vintage.

“Because it’s late-ripening, it sees the whole season, which I really like. You see the whole growing season reflected in the variety. That’s really great,” he says.

“It is all of that,” Hewitson explains. “It’s really different, both as a stand-alone wine and when you add it to a blend it adds so much because of that different feel as well.

“That’s just fun to see when it does that.”

Its limited volume makes it even more desirable, while he also creates a high-end ($450) blend of equal parts, one barrel each, of the best of a unique patch of Shiraz and the best barrel of the Old Garden Mourvedre.

“There’s just not much of it around,” he says. “It’s a great thing to celebrate. It’s been around for a long time, and though it was a hugely planted variety for years, the vineyards that have survived are essentially the best vineyards.

“We don’t get many opportunities with it. Those surviving vineyards just grow great grapes.” 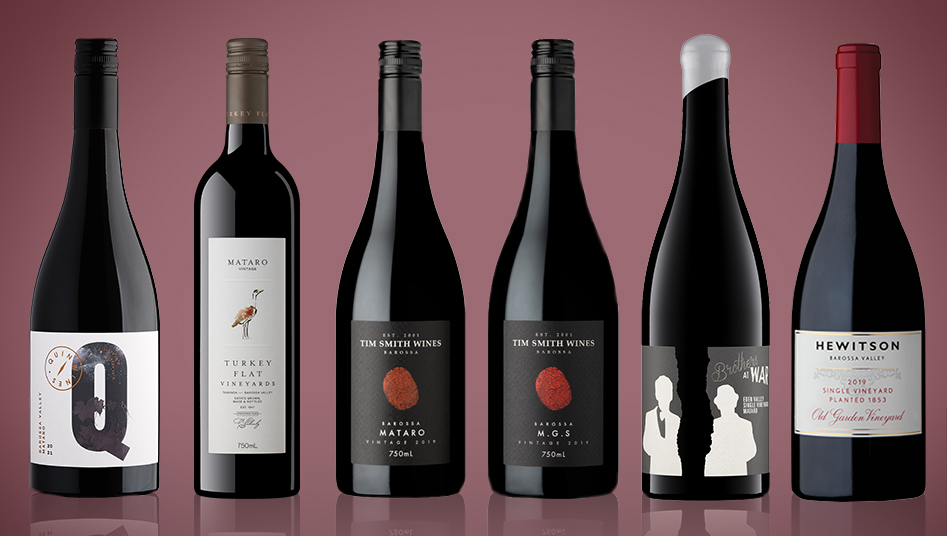 From Williamstown in the southern Valley, on the label noted at “Aldo’s Vineyard”, this is an immediate pleasure in the colour of the pour: garnet, typical of the variety’s restrained hues. There’s familiarity here, too, with its bouquet: earthy, five-spicy with a decent waft of that mix’s component Szechuan pepper (the aromatics, not its mouth-numbing heat). Black cherry seems to be a common fruit profile throughout this bracket, and that’s a joy in itself, more so as it is supported by a delicate sticky chewiness in the tannin coat. All up delicious.

No shirking here. This iteration is fabulously charry and meaty to start, the variety’s treasured tannins given a supporting role early on in the piece. The wine is a savoury, textural blast, plenty of peppery spices on the palate, grape and oak in sync and will do its very best work with protein-rich food on the side – anything from charred beef and rare steaks to Korean ribs.

Crafted mainly from three old vineyards, one believed to be 140 years old, there are sweeter fruit notes here than others in the bracket, but the wine is not as simple as that, with some pretty funky elements to the nose including plenty of smoked meat characters that are no surprise given the variety. Back to the fruit, where black cherry flavours are the key expression, perked up with a lovely slash of acidity across the palate, transitioning the wine towards a long and satisfying savoury finale tempered by fine, gravelly tannins. Rustic in one sense, adventurous and endlessly fascinating as well.

The three initials are familiar enough, just not in this order. Tim Smith puts his passion for the Mataro grape out front here in a 60:20:20 blend, and it works insanely well. The fruit profile is black cherry and plum, the palate aromatics exotic, definitely sitting in the Chinese Five Spice mode that the winemaker himself desires. Medium to fuller bodied in style, with a prominent yet measured coat of tannins, this is an individually creative variation that shows genuine gastronomic personality.

Note that this is an Eden Valley iteration, which still falls within the greater Barossa zone but definitely shows its terroir and its 80-or-so-year-old vineyard provenance. That said, its varietal expression is decisive, through and through, nose to tail. Black cherry as expected but layered intensely with Mataro’s much loved gamey and slightly feral, Asian spicy broth characters. What stands out more than anything is the mouthfeel, with lively acidity and granite dust-like tannins, building into serious, structural palate texture. This will sit brilliantly with big charry meats now, and for many years to come. Really impressive wine.

Note firstly that the label is all about the source of this wine, emphasising its single 1853 vineyard provenance and only revealing its variety, this time in its French expression of Mourvedre, within its back label small print. The Old Garden at Rowland Flat is considered the oldest fully working Mourvedre (Mataro) vineyard in the world, so it’s no wonder it is celebrated thus. The resulting wine is complex and deeply imbued with dark cherry and savoury layers, tightly woven, spicy oak notes included. The “meatiness” that comes with the variety is more resolved here than other examples in the bracket, as if multiple braising elements have melded into a rich and satisfying stock. Savoury, yes, but still with echoes of that glorious black cherry juice never far from the palate. A very special treat indeed.