When it comes to hotel restaurants, there are some that get it right and some that get it very wrong. It’s this inconsistency that can stop locals from making a reservation, with many in-house venues relying on hotel overnighters to fill seats. Here in Adelaide, we also seem to have missed the memo on calling into hotel bars and eateries after work, something more common interstate.

But when the PR machine started around the opening of the new Sofitel, and with it the promise of a new ‘modern French gourmand destination’, apprehension was quickly replaced by curiosity.

And oh Garçon, this is a restaurant that deserves some hype. They say that you take your first mouthful with your eyes and you’ll be eating up the interior before being shown to your seats of this ninth-floor showcase venue. The design here takes chic to a whole new level, with high-end (and probably high-spend) finishes, fixtures and fittings. There’s a fairly heavy use of light blues through the decor, but this is a far cry from Breakfast at Tiffany’s. A good use of panelled timber, bold artworks, top shelf lighting and gold details reflect an intricately detailed geometric tiled floor. Garçon Bleu isn’t just another French restaurant – it’s avant-garde.

And those seats I just mentioned? Not only stunning, they might just be some of the most comfortable in town. They undoubtedly have some of the best views too, if you’re lucky enough to snag a window spot.

Am I gushing? Absolutely. In fact, after tonight’s experience, Garçon Bleu might just be making its way to the top of my list.

Gianni Delogu heads up the kitchen: we pass him and his team at work as we’re greeted just out of the lifts. Ushered through the middle of a double-galley style kitchen and past a central bar with shelves loaded with the good stuff, we’re seated at our corner window table and the good stuff keeps on coming.

First, it’s Saumon Fumé, house-cured and served beneath a glass cloche filled with smoke that billows across the table as it’s lifted. Dinner theatre drama-check. The plate beneath is simple, yet stunning. Delicately rolled slivers of salmon sit beside a nest of kohlrabi coated in a zingy little dill sauce. Around the dish, dollops of avocado each prop up a tiny wafer crisp that adds texture, amped up with that salty pop of flavour courtesy of salmon roe. The cloche smoke was not just for drama either: it permeates through the entire dish, heightening the complexity of flavour in each component. 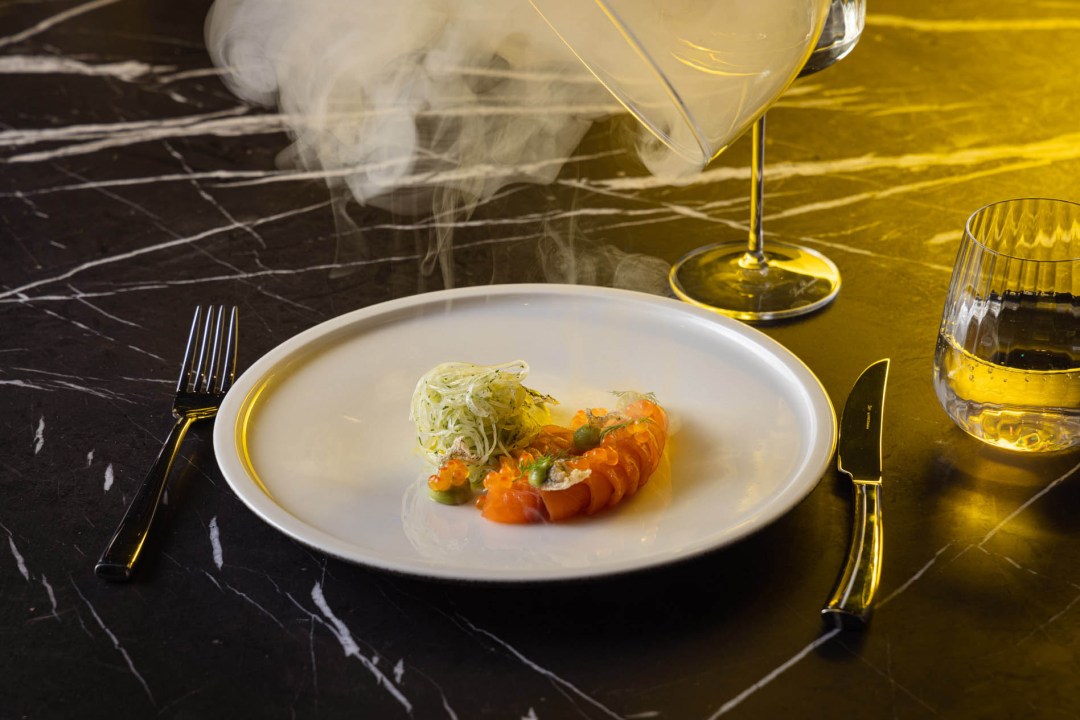 And then, as if elemental, a light and airy cheese soufflé lands next. It’s quite delicious. Delicate in texture yet robust in taste. With it comes a fragrant velouté style mushroom sauce interwoven with streaks of béchamel. It’s served as a pre-made (or is it twice-cooked?) dome on a plate. I’d hoped for something rising from its ramekin but this technical oversight is forgiven, as forkfuls of creamy, cheesy soufflé, mixed with the gravy and béchamel hit. Baby shimeji mushrooms packed with umami have been given a light pickle treatment that adds a little acid to this otherwise – typically French and absolutely appropriate – heavy and buttery dish. 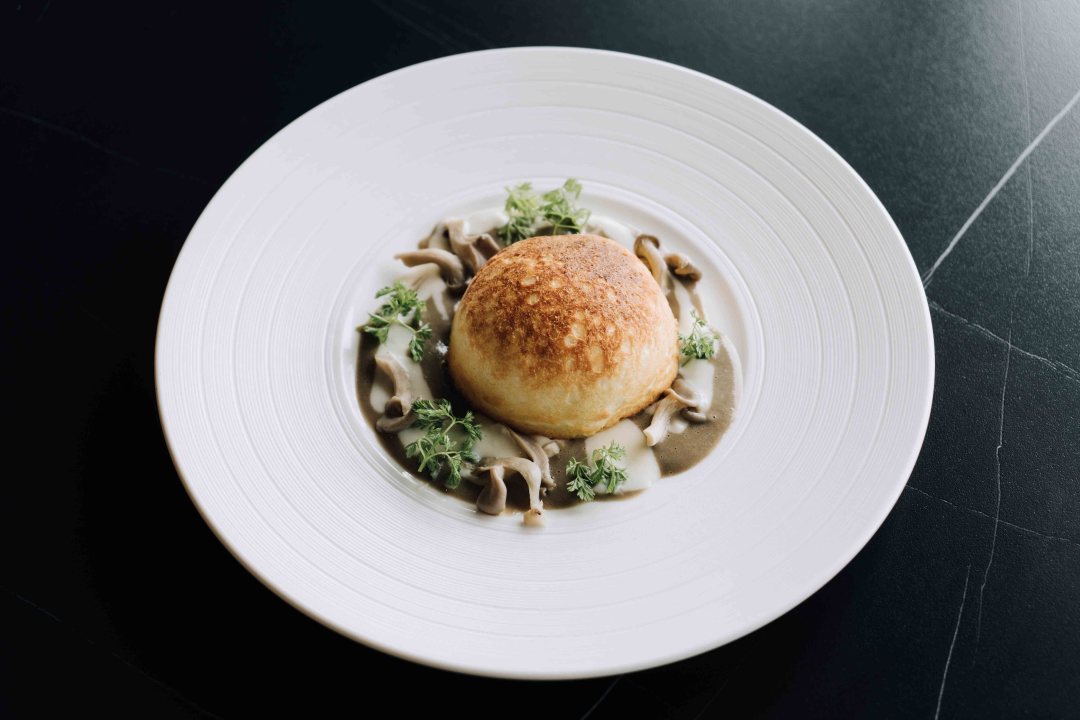 Onto mains and we’re pleasantly surprised by the barramundi, with thin fillets that may have been poached or broiled before searing and are just waiting to fall apart. The dish sings with punches of salty flavour from slivers of Goolwa pipis and petit capers, and tiny balls of cucumber that also provide some freshness. A silky fennel puree and brown butter add depth and richness, and the successful delivery of a French-style fish dish turned up a few notches.

Venison, listed as wild, is exactly that. It’s wrapped in a silverbeet leaf and served aside a stacked pumpkin arrangement done three ways: that is, layered slices sandwiching a luscious soupy mash and then topped with toasted pepitas. Slicing the venison parcel reveals a tender, nicely cooked fillet, soaking up a jus that has a delightful earthy and woody flavour that I can’t quite pinpoint, but the menu reveals it is juniper, the main ingredient used to make gin. It’s no wonder this regular martini drinker is hooked. 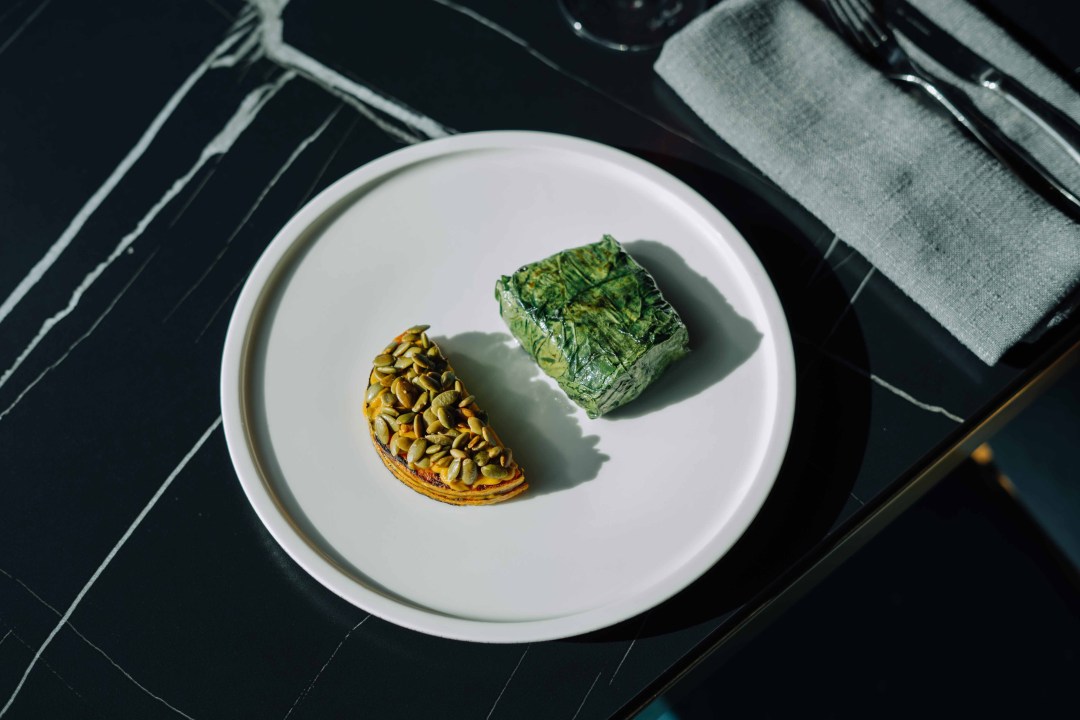 Venison wrapped in silverbeet with a pumpkin accompaniment.

And just as we’re done complimenting the menu to date, dessert arrives. I’m usually quite decisive, but this list has me stumped with too many tempting options. And so naturally, we order three (between two).

Tarte tatin is always a benchmark when it comes to dining anywhere French and, sacré bleu, is Garçon’s version good. It starts with a toasted base of layered and pressed pastry (think mille-feuille) that is topped with a floret style arrangement of poached and caramelised apple. On top is a sticky caramel that pools into the centre of this utterly delicious heap, with crunch provided by little puff pastry domes formed to resemble macarons. Delicieux. 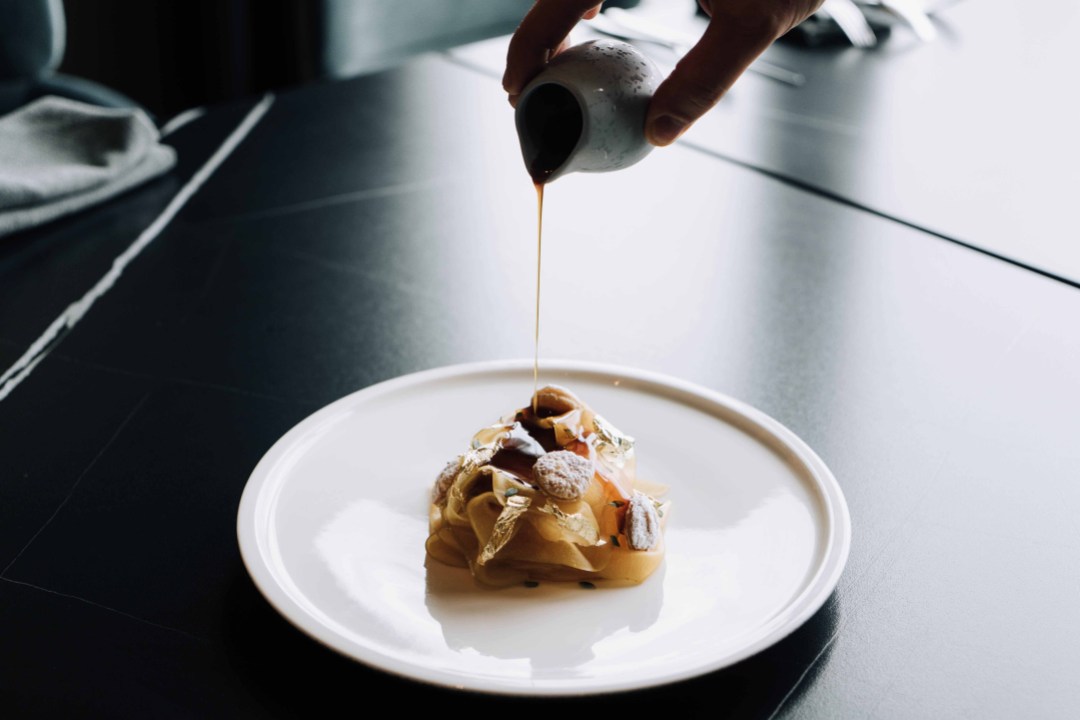 Dessert number two and three are on par, the first of which is a fondant that will have choc-orange fans salivating and the second, called vacherin (which I believed might be French for ‘yum’ but is more like French for pavlova) is perfect for fans of melon, meringue, or both.

In the arenas of food, style, theatre and service, Garçon Bleu is opulence delivered in a sensible fashion. It’s a new benchmark for dining in Adelaide and it all goes down in a hotel.