That’s a pretty stupid place to put a winery, said the truck driver to winemakers James Mungall and Ben Heide at the historic Patritti winery weighbridge.

The delivery man probably says much the same about a nearby vineyard on the edges of the old Marion swimming centre, beside one of the Marion district’s key traffic arteries, Oaklands Road.

He’s right, of course, if you’re a B-Double driver or a real estate developer. But not if you’re a lover of wine and grapevines and their essential connection to Adelaide’s history.

Or if you’re family, friends and winery workers led by third-generation Patritti winemaker James Mungall, who’s proudly carrying on the family tradition at the Clacton Rd winery in the southern Adelaide suburb of Dover Gardens, now virtually enveloped by 1950s and ‘60s suburbia as it morphs into faux Tuscan villas and 21st-century mini-mansions.

Still there it is, just over two hectares of prime real estate remaining as a working winery and cellar door, founded in 1926 by Italian immigrant Giovanni (later John) Patritti. He leased earlier planted vineyards in the Sturt River floodplain district, then known as Brighton and later as the City of Marion, and began making wine for his fellow “new Australians”.

Long before the houses came, he built the winery in the late 1920s with his best friend Christiano (Jimmy) Bissacca, then went on to own several acres himself, up until the 1960s making fortified and mostly red table wines while all around him the farmlands were slowly whittled away to housing estates. By the early 1970s, he also had diversified into non-alcoholic sparkling grape juices, a line that remains a solid business with much of it still being exported to China.

Two aerial photographs on the winery walls from 1949 and 1959 show the extraordinary growth of the surrounding suburbia, changing from vast tracts of orchards and vineyards to its current urban use within that booming decade. More vineyards went the way of compulsory government acquisition for schools to be built to service the new residents, and finally, the last grower vineyard directly surrounding the winery was shut down in 1977, but not before the Patritti family fashioned a fortified Verdelho from that year. Only a few small barrels of that wine remain in the company’s prized collection.

Amazingly, three tiny vineyards still remain in production across the greater City of Marion. They are all council-owned on recreational use land which the Patritti family winery now manage. The best known is the Oaklands Rd site, one very visible hectare of Grenache with a smaller section of Shiraz, the plantings stretching back to 1907.

The Patritti crew began looking after it in 2006. The fruit, then, was in less than perfect condition so the winemakers turned it to fortified, keeping up the tradition each year so now they have been able to put together a “rare” style Tawny as one of five wines in a set of “Urban Vineyard Collection” wines under the Patritti banner, due for release this Spring. 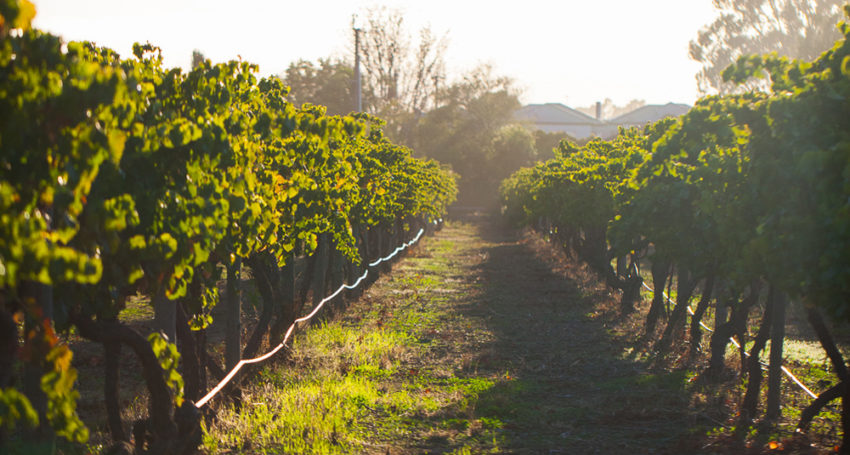 A better-known table wine, however, also comes out of this vineyard – the Marion Vineyard blend of those ancient Grenache and Shiraz vines. The surviving vines have been nurtured by Patritti’s viticulture and winemaking teams, improving the site and protecting the fruit from birds with netting in the past two years. This wine will also be repackaged under the Urban project banner.

“A lot of people drive past the Marion Vineyard and we hear all the stories,” Mungall recalls.  “It means something to so many.

“Young people sneak into the vineyard and smoke their first cigarette, they’ve pinched grapes from there, and every year the Greek ladies pinch the leaves for their dolmades.

“It’s been part of the community for a century, and it’s still a way to connect with them and the area’s history.”

As part of the winery’s long-term arrangement with the City of Marion, Patritti also looks after two smaller vineyards in more hidden corners of the district, still on public land. Like the Marion Vineyard, they have strong historical and environmental significance, planted along the Sturt River floodplain at a time when Marion supported a range of produce farming and supplied greater Adelaide with much of its fruit and vegetables.

At Warriparinga Wetlands, behind the Sturt Police Station on Sturt Road, a tiny patch of just 0.4 hectares of vines has been brought back to fruitfulness from a former vineyard that stretched across both sides of the river in a site once known as Laffer’s Triangle. For 20 years it was overrun by olive trees and later used as a construction site for the Darlington interchange road upgrade.

The remaining vines still produce bunches of white Pedro Ximenez and Palomino varieties, and have been saved by Mungall and Heide to produce a crisp white table wine for the Urban Vineyard Collection release, although in minute quantities.  A portion of the Palomino also has gone into a light red style, called April Red as it is processed quickly and bottled by the end of April in its harvest year.

If you live in one of these suburbs here, you can literally have a wine on your table that has not travelled any more than 10 kilometres

Back near the old Marion vineyard, tucked in behind the Warradale Army Barracks in the Oaklands Wetlands and Reserve, another tiny patch of old Muscat Gordo vines remains. These are the last traces of a thriving agricultural enterprise with a story stretching back to 1843 when an early wealthy settler, Samuel Kearne, built a handsome mansion and estate on the land, producing crops, tables grapes and other fruit as well as running champion horses. Over the years and across several changes in family ownership, the land was slowly lost to public use and failed government planning, the home sold and falling into disrepair, vandalised and eventually demolished.

Just half a hectare containing 800 vines is left, thought to have been some of the latest planted in the area, at least 60-years-old. The Patritti family has managed it since 2018, restoring the vines, installing irrigation and nets and this year harvesting between one and two tonnes of fruit, the first commercial pick since the 1960s.

Mungall and Heide have decided to turn this into an aromatic white spirit as a different way of expressing the remnant muscat vines – it also will take its place also in the Urban Vineyards project release.

“So many people walk past these vines, and whenever we’re here everyone stops and wants to talk about it,” Heide says.

“They’ll get to see it shortly and be able to taste something from right here.”

The imminent release of the wines will coincide with the Spring opening of the winery’s new suburban event and tasting space set in one of the original cellars among massive old oval oak casks and in the courtyard of the original winery.

“If you live in one of these suburbs here, you can literally have a wine on your table that has not travelled any more than 10 kilometres – from the vineyard, to the winery, a local bottle shop, our cellar door, and to your home,” Heide says.

“That is unbelievably unique.”

This artwork by Kate Mason (katemason.com.au) will form the basis of the “Urban” project’s labelling.

A crisp, aromatic burst to begin – gooseberry, crunchy pineapple and lemon sherbet with a delicate spice. A blend of 65% Palomino and 35% Pedro Ximenez, it’s virtually clear white in colour, and drinks deliciously, especially very cold. Brilliant for summer. It will take its place in the Patritti Urban Vineyard Collection due for release in Spring, labelled with the artwork above across all five under that banner.

A combo of 93% Grenache from the old Marion Vineyard fermented over 7% whole clusters of Palomino from the Warriparinga vineyard. Light garnet in colour, red fruit crush aromatics with a floral, earthy fragrance. Nouveau style light red yet without the confection often seen in this style. Fine tannins tighten the palate and add a savoury coat. The 2020 version of this used Pedro Ximenez in the mix and was a great hit, now sold out. Top summer red refreshment for sure.

This Marion Vineyard 77:23 red blend, Grenache dominant, has a great track record as a full-bodied style over the years, but in this new collection is toned more to medium-bodied and fragrant drinking with rose petal, blood lip, and faint eucalypt notes. It’s bright, fleshy, juicy and earthy all at once, embodying all the glorious mysteries of Grenache. Importantly as well, it has a specific vineyard character, like walking into an Indian supermarket with its heady aromas of sweet and earthy spices, white pepper most obvious. The 2018 vintage of this is still available in its previous label and highly recommended.

A white, grappa style spirit, highly aromatic with bready, yeasty, licorice characters. The first time out for this digestif, made from remnant Muscat Gordo vines on the old Oaklands Estate farm, now the Oaklands Wetlands and Reserve. From a pot still using the pure heart section of the distillation. Soft on the palate and highly drinkable. Employ as a digestif after a hearty meal, or even as a mixer with tonic.

The Patritti family has a long tradition in the fortified game, to this day still managing close to half a million litres of various blends in its Dover Gardens stores. They began working the old Oaklands Rd Marion Vineyard in 2006 and this contains a solera blend of mostly fortified Grenache from every vintage since – 15 years in the making. Aromatic and delicious with sticky date pudding and butterscotch flavours as well as fruity coffee notes, a lighter, contemporary fortified with easy drinkability.

As the Dover Gardens and Marion district vineyards were lost to suburbia in the 1950s and ‘60s, the Patrittis bought vineyards in McLaren Vale. This comes from their Blewitt Springs vines, matured for 15 months in plenty of larger, new French oak, which gives power and finesse to obviously fabulous fruit. The colour is wild purple, exciting the senses no end. It’s big chewy, grapey, and plummy wine proud of its full-bodied personality. Cellaring will benefit.

Want more? Read all of our wine reviews here.