It’s 1986. Australian of the Year, Paul Hogan, is telling the world where the bloody hell Australia is, Lindy Chamberlain is released from prison and newsrooms around the world are scrambling to understand the full extent of the HIV/AIDS crisis. This is the setting for the ABC’s new drama series The Newsreader: a show as gripping as the news it revisits.

Created, produced and written by Michael Lucas (Offspring, Rosehaven and Wentworth), The Newsreader focuses on a lead presenter of network news, Helen (Anna Torv of Mindhunter, Fringe and Secret City), and her producer, Dale (Sam Reid, Lambs of God, The Hunting and Waiting for the Barbarians). Like the pairings in Lucas’s previous shows, Helen and Dale make for a complicated but irresistible combination.

“I feel like every single thing I write there’s a recurring theme, and it’s two very different people… who have a kinship or love,” Lucas says. “Whether it’s Nina and Billie in Offspring or Luke and Celia’s [Luke McGregor and Celia Pacquola’s] characters in Rosehaven.

“Then in [The Newsreader] in some ways the core of it again is Anna Torv’s character, Helen, [who] is so bolshie and alpha, [whereas] Sam Reid’s character, Dale, is much more nervous and sensitive…

“The environments are really different, and the tone is different, but that sort of chemistry between really contrasting people who still love each other comes back again and again.”

Torv and Reid – who Lucas describes as “dream casting” – create an immediate intimacy, which surges throughout the newsroom and leaps off the screen. This is all the more impressive given the actors only met upon arriving on set in Melbourne, having recently returned from Los Angeles (Torv) and London (Reid).

“The pandemic, in terms of filmmaking, has caused so many problems,” Lucas says. “But if there was one silver lining it’s that a lot of international actors were home in Australia… In any other year they [Torv and Reid] probably would have been on an international production, but in 2020 they were both home.”

Helen is unashamedly inspired by trailblazing journalist Jana Wendt and similarly beloved by viewers, much to the frustration of co-host Geoff (Robert Taylor) and head of news Lindsay (William McInnes). Speaking of contemporary comparisons, Lucas points to Leigh Sales and Tracy Grimshaw, but he is particularly interested in how the relationship between reporter and audience has changed in the last 35 years.

“In The Newsreader… the news finishes and there are phone calls to the switchboard, [with] everyone offering their opinion. But social media has taken that to a whole other level, where you can directly tag or message someone. You don’t have to put your name to it, you don’t even have to speak to another person, you can just say what you want about someone.” 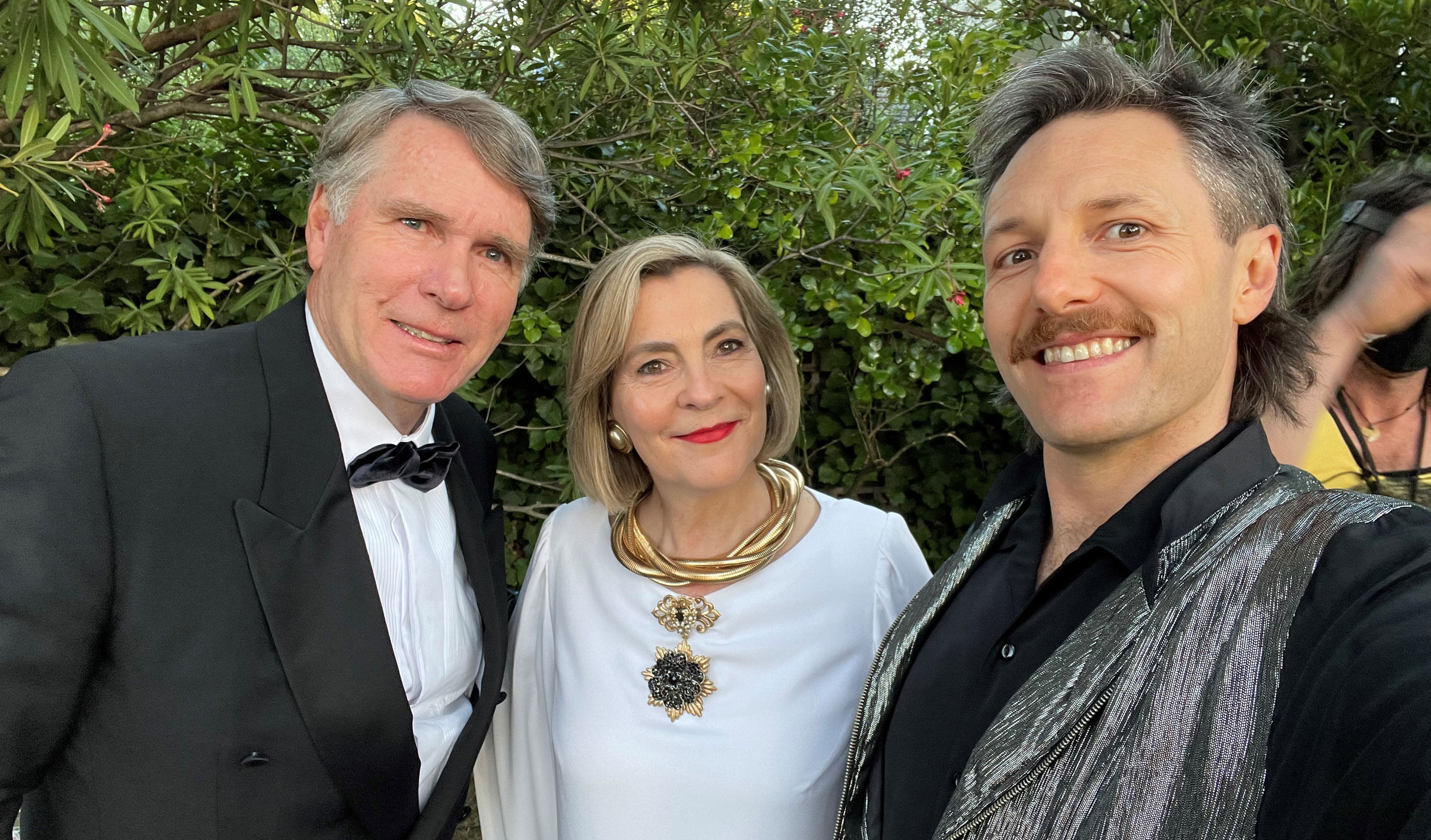 Behind the scenes: Michael Lucas (right) with actors Robert Taylor and Marg Downey.

Despite the differences in technology, other similarities between 1986 and 2021 are striking. The show takes in a time of great social reckoning and directly addresses news stories that encompass race, class and – compounded by Helen’s career trajectory – gender. Lucas describes his research as “eye opening” and “shocking”.

“I actually started researching in 2015, so before Me Too… I knew at that point we were still years off making the show, and I thought by the time the show comes out we will have moved on from these conversations and the show will be seen as [dated], but of course the absolute opposite has happened.

“When all this stuff started coming out of Canberra, I mean it’s the same sort of thing we’re talking about [in The Newsreader]: a cocktail of bullying and misogyny and a lack of understanding of the kind of impacts that could have on people’s mental health. It was really surreal to be seeing – particularly the Canberra stories this year – and realising how much they seemed to align with what I had researched from the ’80s.”

With a stellar cast, clear direction and studied set and costume design, The Newsreader takes the viewer back to the ’80s without characterisation. But it’s the carefully considered stories and their social impacts that make the show a tour de force.

Lucas says of the issues faced in The Newsreader, including gender, mental health and sexuality: “They’re not going anywhere. They’re just as pertinent, unfortunately, in 2021 as they were in 2015 when I started writing, and in 1986 when it’s set.”

The Newsreader premieres on ABC TV this Sunday, August 15, at 8.30pm, with new episodes available on iView weekly.

In the Studio with Ray Harris

“The best fertiliser is the soles of your boots”