No one wanted it this way but the prolonged shutdown of cinemas in France has left a lot of very fine films with nowhere to be seen, except in Australia. As a result, the 2021 Alliance Francaise French Film Festival will be showing a number of movies not yet seen in France, among them nine world premieres.

It was an unnerving start for the new artistic director and French cultural attaché, Karine Mauris, who says in 2022 the COVID effect is likely to be even worse, at least for the French.

At the outset she was worried the pandemic would slash the number of films coming through. Instead, she felt almost straight away the pressure felt by the distributors of French films in Australia who were handing over features not yet seen by their home audience, sometimes after directors had worked on them for years.

“There is nowhere to show them and they don’t want to put these movies on the internet, they want to show them in a real cinema,” Mauris says.

“So this year, the selection is very good! Next year there will be more than 300 movies for selection, so it will be even more complicated.”

Her choice for opening night could not be more French. Eiffel is a love story between the engineering genius who designed the Eiffel Tower for the 1889 Paris World Fair, Gustave Eiffel (Romain Duris), and his muse, Adrienne, played by Sex Education actress Emma Mackey. The engineer had already collaborated on the framework of the Statue of Liberty and was under huge pressure to come up with something worthy of Paris’s skyline.

“You’ve got everything; you’ve got romance, you’ve got beautiful Paris in the 1900s – and there were a lot of challenges because when they first saw the tower, Paris hated it,” Mauris says. “So it is the vision of this man against everybody, saying ‘This is what I want for Paris’.”

Delicious is set in 1789 France, when gastronomy was the domain of the aristocrats.

Coming off the chaos and misery of the pandemic, Mauris was keen to show films that uplift, and in that spirit chose Delicious, set in the countryside just before the French Revolution. It tells the story of France’s first restaurant founded by a talented chef who until then did what all chefs did: cooked for the private pleasure of the aristocracy.

Another key international premiere is Final Set, a psychological drama about a tennis player coming to the end of his career who is fighting to achieve the potential he once had. 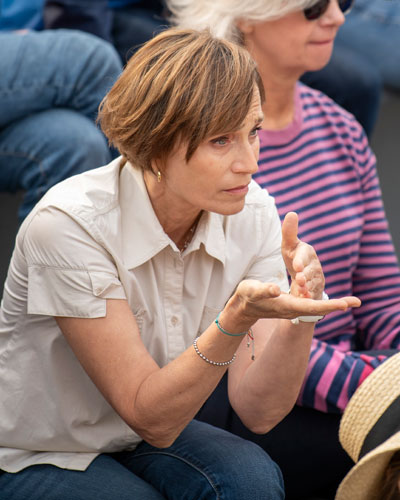 “His mother is [played by] the gorgeous Kristin Scott Thomas and she speaks perfect French,” Mauris says. “We always think of her as an English actor but in France she has an amazing reputation.”

Mauris saw The Man Who Sold His Skin coming off a series of screenings but found it a beautiful moment of cinema, based on the living art of Belgian conceptual artist Wim Delvoye. In the film, he tattoos a Syrian refugee who becomes a work of art.

“It highlights the complexity of the modern world,” she says. “He sold his skin to an artist to move to Europe but he has lost his freedom as a human being.”

There is a stream of films dedicated to the very French concept of the magnificent loser; people with big ideas whose follies combine comedy and tragedy. They include what Mauris says is the festival’s most challenging movie, Mandibles, an absurdist comedy about two men who train a large fly as a pet.

Also in a comic vein is Antoinette in the Cévennes, starring Laure Calamy (Call My Agent) as a primary school teacher in her 40s stranded in the rural wilderness with a donkey instead of spending the weekend with her married lover.

For closing night, Mauris chose #Iamhere, the story of a man who flies to Seoul to find a Korean woman he met online.

“I wanted to finish with something light – and with some travel, because we can’t travel at the moment. And it starts in one of my favourite places in the south of France.”

Other films to watch for include:

Aline, inspired by the life of Celine Dion; Appearances, a thriller set in Vienna; De Gaulle, a biopic on the French general who changed the course of history; Night Shift, a tense night of high-stakes policing; and Summer of 85, from the much-loved director Francois Ozon.

For Sale: Reds back on auction block