The biennial festival opened on October 14 and has presented films from more than 40 countries over the past 12 days, with many sessions selling out and more than 20 additional screenings added to meet demand.

Although it officially closed last night, a five-day extension will see “best of the fest” screenings presented at Palace Nova Eastend Cinemas throughout this week.

With tickets sales from the final day of the program, this week’s screenings and the world premiere next month of the film This is Port Adelaide still to be added, the festival’s box office takings are already ahead of the final 2018 result. Organisers forecast the final box office tally will be a 20 per cent increase.

“To have achieved this result with socially distanced, checker-board seating reducing our capacity by 50 per cent and a smaller selection of films is truly remarkable,” said Mat Kesting, who took over as festival CEO and creative director last year.

“I am proud and delighted that we can declare the festival to be a resounding success.”

Kesting added that 2020 had been “enormously challenging, and we’ve had to be incredibly nimble in these COVID times, making at least three different plans across the year”.

“It’s so gratifying to see all that work result in a festival that our audiences have comprehensively embraced.”

The “best of the fest” screenings begin this evening, with Another Round at 6pm and the Made in SA short film program at 8.15pm.

Other screenings throughout the week will include Heather Croall’s Her Old Faither and Truffle Hunters (Tuesday), Helen Reddy biopic I Am Woman and Shiva Baby (Wednesday), AFF Documentary Feature Award winner Firestarter – The Story of Bangarra and Adelaide-made film Damage (Thursday), and High Ground and Video Nasty (Friday). 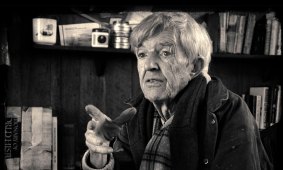 Meanwhile, it was announced today that South Australian producer and entrepreneur Anton Andreacchio, founder of virtual reality production company Jumpgate VR, has been appointed as the new chair of the Adelaide Film Festival board, replacing outgoing chair Sandra Sdraulig.

Minister for Innovation and Skills David Pisoni said the new members would bring “a diversity of the skills and experience needed to undertake the functions of the AFF board”.